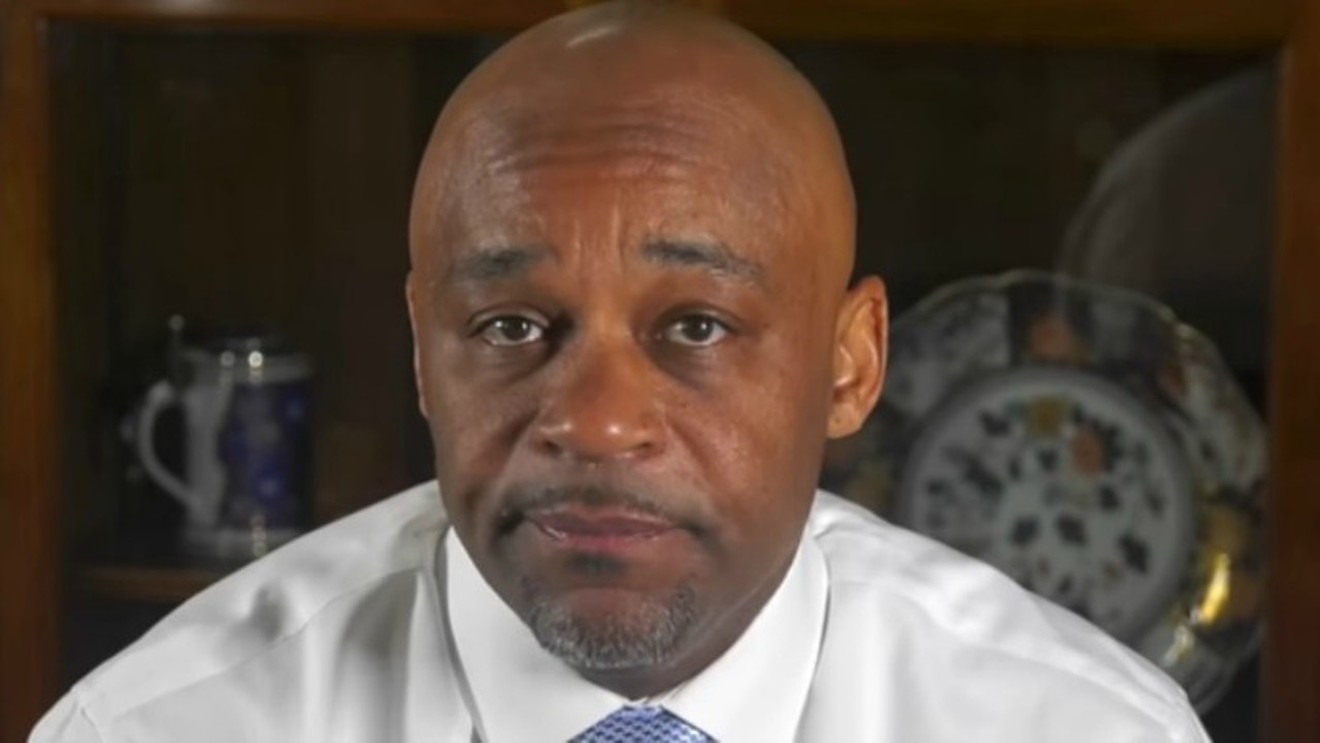 Mayor Hancock apologizing to the city for sending inappropriate text messages to a subordinate. YouTube
Most workplaces inform employees how to handle sexual-harassment claims. But notably absent from the City of Denver's Code of Conduct and Discipline and dispute-resolution process is any information on what employees should do if their harasser is their supervisor or an elected official.

The dispute-resolution process even encourages someone with claims of sexual harassment to approach their supervisor, which would have meant that six years ago, Detective Leslie Branch-Wise would have gone directly to the man she says harassed her — Mayor Michael Hancock — when he sent text messages that made her feel uncomfortable.

Six years ago, a very-married Hancock sent Branch-Wise, a Denver Police Department officer assigned to his security detail, text messages that, among other things, asked Branch-Wise if she had ever taken pole-dancing classes. The message didn't end there: When Branch-Wise didn't respond, the mayor wrote: "Be careful! I'm curious;)!"

Branch-Wise, a twenty-year veteran cop, told Denver7's Tony Kovaleski that Hancock's texts made her sick to her stomach. They frightened her. When Kovaleski pressed her, she insisted: Mayor Hancock had sexually harassed her.

In an interview that aired during Denver7's whopping eight-minute piece on February 27, a somber mayor told Kovaleski that he was sorry and takes responsibility for his actions. But the mayor adroitly avoided confessing to having sexually harassed Branch-Wise.

In a statement he later released, Hancock made clear: "My behavior did not involve sexual advances or inappropriate physical contact.

"During Detective Branch-Wise's time on the security team, we became friends, but my text messages in 2012 blurred the lines between being a friend and being a boss," he continued.

Not only did Hancock talk to Branch-Wise about pole-dancing, but he also commented on her appearance. Spotting her at a Nuggets game, Hancock told her via text that she looked "sexy in all that black."

However Hancock interpreted his relationship with Branch-Wise, she has made it very clear that his advances made her feel uncomfortable. But do they rise to the level of harassment?

Yes, according to the Denver's Code of Conduct and Discipline and city agencies that oversee employees. According to the Code of Conduct, harassment includes "verbal conduct such as epithets, derogatory comments, slurs, unwanted sexual advances, invitations, or comments." According to the city's Career Service Authority Rules and Regulations, sexual harassment is defined as "any unwelcome sexual advances, requests for sexual favors or other verbal or physical contact of a sexual nature when," among other things, "such conduct has the purpose or effect of unreasonably interfering with anindividual’s work performance or creating an intimidating, hostile or offensive environment."

The Code of Conduct lays out the process that a city employee can take if she or he feels harassed.

The employee is then encouraged to file a grievance with an HR rep or the employee's appointing authority, which, in Branch-Wise's case, would have meant Hancock. The "agency" for which the employee works will conduct an investigation and "take action, as deemed appropriate, based on the outcome of the investigation."

The city's Dispute Resolution website outlines a process similar to that in the Code of Conduct, with a few notable differences, including this: The first step encourages anyone who has experienced harassment to take their claims to their supervisor.

"Before taking steps to undergo mediation, employees are encouraged to have open and candid discussion of work-related issues with their immediate supervisors," the first step in the Dispute Resolution process states.

If that step doesn't sufficiently silence your harasser, a "third-party mediator" is brought in. The mediator "helps the parties communicate their different perspectives, discuss their needs and interests, and explore ways to resolve their conflict in a mutually acceptable way." If that doesn't work, an employee is directed to fill out a form detailing his or her grievances. If the outcome of an investigation of those grievances doesn't come back in his or her favor, an appeal is possible.

Denver's Office of Human Resources has been working for months on a mandatory sexual harassment and safe workplace training for all city and county employees that it says is not related to Hancock's apology, as some media outlets have claimed.

"This training program was in the works months prior to the apology issued yesterday by the mayor and is not a response to that news," according to a statement from Diane Vertovec, director of marketing and communications with the city's Office of Human Resources. "This training is on track to be released to employees in early March and will be required training every two years."

In the fallout that followed Hancock's apology, several city council members and city officials have said they want to ensure that everyone who works for the city feels safe. In a note released on February 28, Denver City Council President Albus Brooks said that "as the president of Denver City Council, it is important to me that we foster a safe work environment for all city employees. I am committed to creating a culture where the lessons we learn from can be applied to develop a more equitable Denver."

No one has suggested revisiting the city's policies for reporting harassment.

Update: This post has been modified to include responses we received from the Office of Human Resources about the process for reporting harassment.