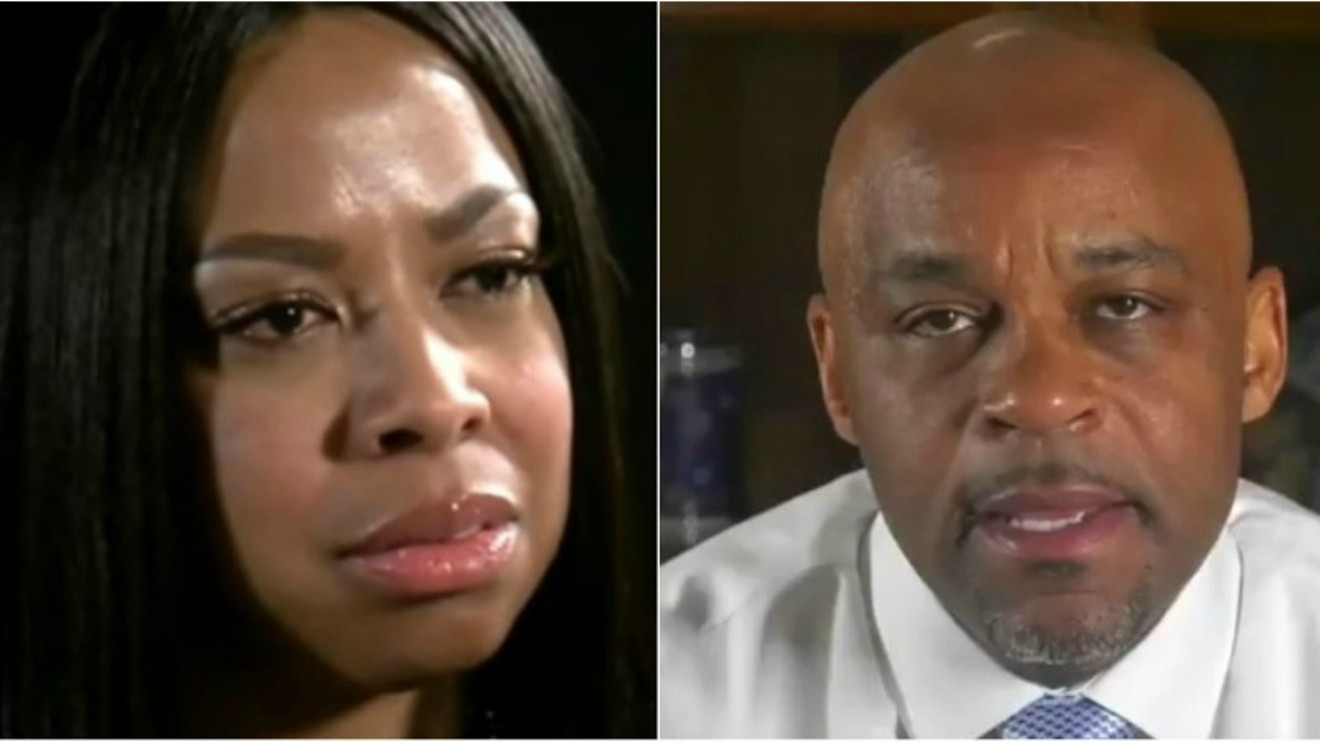 Original post: Last night, Mayor Michael Hancock issued an extraordinary video apology for what his office has termed "inappropriate behavior" toward Denver Police Detective Leslie Branch-Wise when she was part of his security detail approximately six years ago. The clip, on view below, was prompted by Branch-Wise's participation in a February 27 Denver7 report in which she shared text messages from Hancock, one of which asked if she'd ever taken a pole-dancing course before warning her, "Be careful! I'm curious;)!"

Hancock's star has continued to rise despite past links to stories alleging sexually inappropriate behavior — most notably involving the Denver Players/Denver Sugar prostitution ring. But the latest revelation, which is emerging amid the post-Harvey Weinstein rise of the #MeToo movement, suggests that this time around, he won't so easily avoid paying a political price as he's gearing up to run for his third term as mayor.

In her interview with Denver7, Branch-Wise made public an open secret among political observers and the press: She was the Denver police officer to whom Hancock friend and political adviser Wayne McDonald was accused of making inappropriate comments in 2012. This behavior prompted Branch-Wise to request removal from the mayor's security detail, and Hancock sacked McDonald four days later. The following November, McDonald sued Hancock and the City of Denver over his firing, and while Branch-Wise was listed as one of the plaintiffs, Westword chose not to use her name.

McDonald's lawsuit can be accessed below — and it ended with a $200,000 payout. In our 2016 post about that transaction, we said the only thing Hancock would get out of the deal was "the knowledge that the whole mess is finally behind him, thanks to some ready cash previously collected from the citizens of Denver."

Clearly, we were wrong about that.

As for Branch-Wise, she received $75,000 in a 2013 settlement that precluded her from suing anyone else in city government. So why is she speaking out now? Denver7 says she was prompted by an anonymous letter sent to area news outlets; Westword received a copy last November. The station decided not to publish the document because its claims could not be verified, and Westword was unable to do so, either, since all of the potential sources mentioned in the missive had very good reasons not to talk.

As for the Denver7 report, it runs for nearly eight and a half minutes — an extraordinary length for local TV — and begins with devastating comments from Branch-Wise: "It made me physically sick. It was extremely scary." Reporter Tony Kovaleski then goes on to detail Branch-Wise's sexual-harassment claims against Hancock, complete with text messages from the 2011-2012 period that vividly depict one proprietary boundary after another being breached. 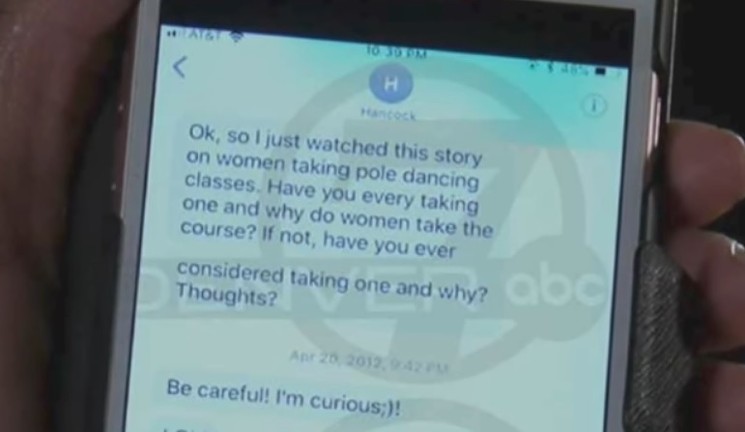 Hancock's text message to Leslie Branch-Wise about pole dancing.
YouTube via Denver7
The package also includes a sit-down with Hancock, who apologizes for his actions — and he does so again in a video released by the city.

In the latter, Hancock says, "Six years ago, Denver police detective Leslie Branch-Wise was a member of my security team. In May of 2012, she called me. She let me know she had requested a transfer out of the unit because a member of my staff had sexually harassed her. I listened, and what I heard greatly disturbed me. I apologized that this had happened. We reviewed the matter and took immediate action. The employee [McDonald] was fired within days."

After a pause, he notes that "while those facts have been public for years, I am here today to apologize for my own words from that time — text messages that were too familiar and unprofessional. But let me be clear: My behavior did not involve sexual advances or inappropriate physical contact."

He goes on to say that "during Detective Branch-Wise’s time on the security team, we became friends, but my text messages in 2012 blurred the lines between being a friend and being a boss. Unfortunately, I didn’t know until just a few days ago that she felt our text exchanges were unwelcome and contributed to the pain and disrespect she was already feeling. But it is obvious now that she did feel that way. I sincerely apologize to Detective Branch-Wise. I apologize to my wife and family and to the people of Denver."

In Hancock's words, "I trust that those who know me will recognize that this is not a full measure of my character —  of who I am as a husband, a father, a son or the mayor of this great city. I have learned from this mistake, and today I assure you that my words and actions will continue to support all women in the workplace. I have the utmost respect for Detective Branch-Wise. She showed courage in 2012, and again by coming forward now. She is a valued and dedicated police officer who has served and continues to serve this city well."


No such remarks from Hancock were forthcoming in the wake of the Denver Players/Denver Sugar scandal, which we've detailed in this space.

The main figure in the matter was Scottie Ewing, a onetime professional skier who first graced the pages of Westword in the June 2006 Jared Jacang Maher feature "Swap Talk," which detailed the competition between Ewing and Scarlet Ranch's Kendall Seifert for Denver swing supremacy. It's a tale that Ewing didn't want told. He and his attorney, Michael Andre, shared their objections during a meeting at the Hornet with Maher and editor Patricia Calhoun — but Westword published the story anyway.

The following February, Andre killed himself after an eight-hour SWAT team standoff in Cherry Creek.

When "Swap Talk" saw print, Ewing was best known for his association with the on-premises club Sindicate, which closed in 2005. But within months of Andre's death, Ewing was back in the news via a swingers' club he'd opened at 3648 Navajo Street. That project was followed by the launch of Sugar House, which Calhoun described as a "restaurant/bar/(very) short-time hotel" in this April post about its building going on the block.

But federal agents didn't believe Sugar House was Ewing's sole means of support. In May 2010, the IRS came after him, alleging that he'd been using a company called Sindicate Media & Consulting to "disguise from the Internal Revenue Service the true source and amount of the income he received from Denver Sugar/Denver Players." His indictment on tax charges got national play via the sports website Deadspin.

An image from the Denver Sugar website, which is no longer online.
File photo
By last November, Brenda Stewart, an ex-escort with an ownership stake in Denver Sugar/Denver Players, had also been hit with charges related to tax evasion, racketeering, money laundering and more.

Then, in February 2011, Ewing cut a deal to testify against Stewart. His punishment: six months of home detention.

Ewing was allowed to work at Sugar House while serving this sentence — and that presumably offered thieves the opportunity to bust into his house and swipe a computer that included what the Denver Post characterized as "a client list and appointment sheets."

Such material formed the backbone of a Complete Colorado report that noted the name "Mike Handcock," accompanied by Hancock's cell phone number, appeared on a Denver Players document along with a payment amount of $275.

At the time, Hancock was running for mayor, and even though his campaign manager, Evan Dreyer, acknowledged that the number listed on the document was the same as Hancock's personal cell, he blasted any attempt to link the candidate and prostitution as "categorically untrue," adding, "Michael and the campaign have endured negative, false, deceptive attack after attack for months, so nobody should really be surprised at this. The thing that's different about this one is just the personal nature of it, and how shameful it is."

Today, Hancock is dealing with a different brand of shame, and with entrepreneur Kayvan Khalatbari already in the mayor's race and other hopefuls circling, his re-election campaign just got a lot more complicated.