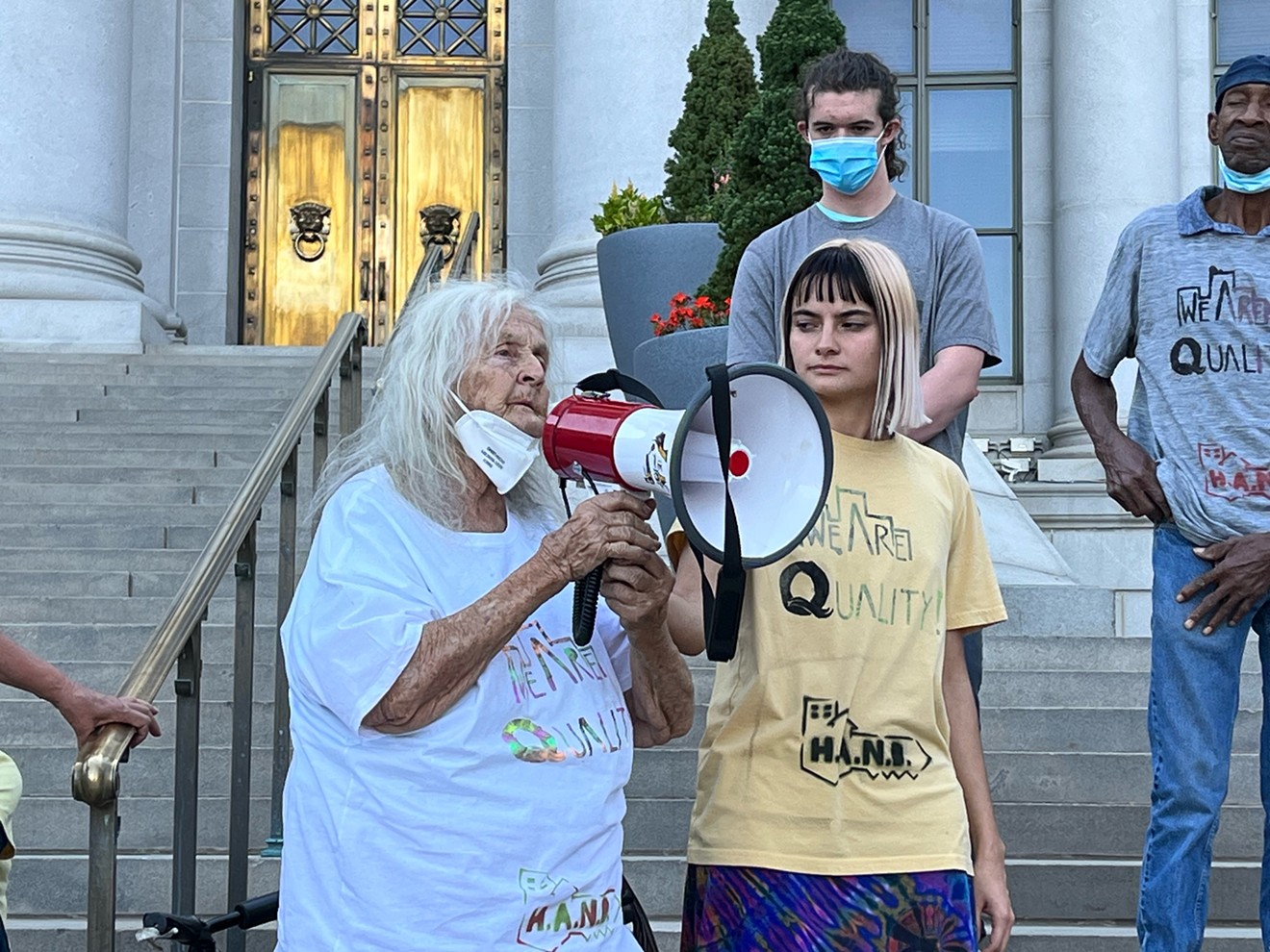 Quality Inn residents, like Kyrie Autumn, are demanding a meeting with the city. Conor McCormick-Cavanagh
A pandemic lifeline for people experiencing homelessness in Denver is about to be cut: On September 16, a City of Denver-funded lease for 174 rooms at the Quality Inn/Rodeway Inn complex at 2601 Zuni Street will end. The facilities were reserved for people vulnerable to serious illness or even death from COVID.

"The effect of this on the hotel residents is one that is inexcusable. People are being put back out onto the streets in unsafe conditions," one older resident said during a rally with Housekeys Action Network Denver outside the City and County Building on August 29 prior to the Denver City Council meeting. Residents had received notice that they'd need to move by mid-September just a week earlier.

"These protective action shelters were part of COVID emergency response and were always planned to be temporary. As federal funds for this type of sheltering are anticipated to end, we have worked with our partners to begin transitioning guests to other facilities," says Derek Woodbury, a spokesperson for the Denver Department of Housing Stability.

Aside from the Quality Inn and Rodeway Inn complex, which the Colorado Coalition for the Homeless has paid for through federal COVID relief money passed along by the city, there are two other protective action hotels in Denver. The city has already ended three other motel leases covered by federal relief money earlier in the pandemic.

"Our protective action hotels have provided shelter for individuals who are more susceptible to COVID-19, including older individuals and those with underlying health conditions," Woodbury says.

Several of the protesters who gathered at the City and County Building on August 29 fit that description. There were people in wheelchairs, an individual who was deaf, and elderly residents, including 83-year-old Kyrie Autumn, who also spoke during city council's public-comment session about others who needed continuous positive airway pressure (CPAP), a breathing device that counters obstructive sleep apnea. 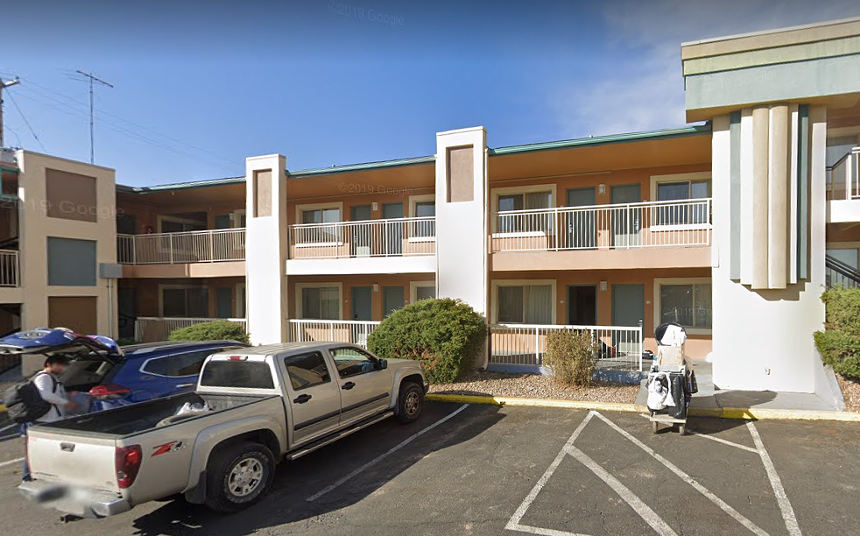 The Quality Inn has been a lifeline for people experiencing homelessness in Denver.
Google Maps
"I would really love to express to anybody who has any power to reconsider the original priorities. I know people who are in the Quality Inn who are on CPAP. He can't be on the street and run his CPAP," Autumn told councilmembers, adding that she doesn't know where she'll move by September 16.

Homeless service providers have been working with residents of the Quality Inn complex complex to find an alternative to the streets. "Shelter staff are actively helping transition guests to housing, future shelter arrangements (including congregate and non-congregate shelter), plus medical and behavioral health-care supports," Woodbury says.

But some people don't want to go into a congregate shelter setting. "In two weeks, I will be told: Shelter, leave the state, go on the street — or what are my other options if they don't get me housing? I need somebody who will really do it, not somebody who will say they do it," one woman said during the rally.

According to Terese Howard, the founder of Housekeys Action Network Denver and a former leader of Denver Homeless Out Loud, her organization and residents of the Quality Inn are demanding a meeting with HOST.

"We are asking both HOST and the Colorado Coalition for the Homeless to work together to ensure that no resident is kicked to the street or the shelters or any unsafe living condition on September 16," Howard said at the rally. "There are actions that can be taken to ensure that everybody has housing."
KEEP WESTWORD FREE... Since we started Westword, it has been defined as the free, independent voice of Denver, and we'd like to keep it that way. With local media under siege, it's more important than ever for us to rally support behind funding our local journalism. You can help by participating in our "I Support" program, allowing us to keep offering readers access to our incisive coverage of local news, food and culture with no paywalls.
Make a one-time donation today for as little as $1.