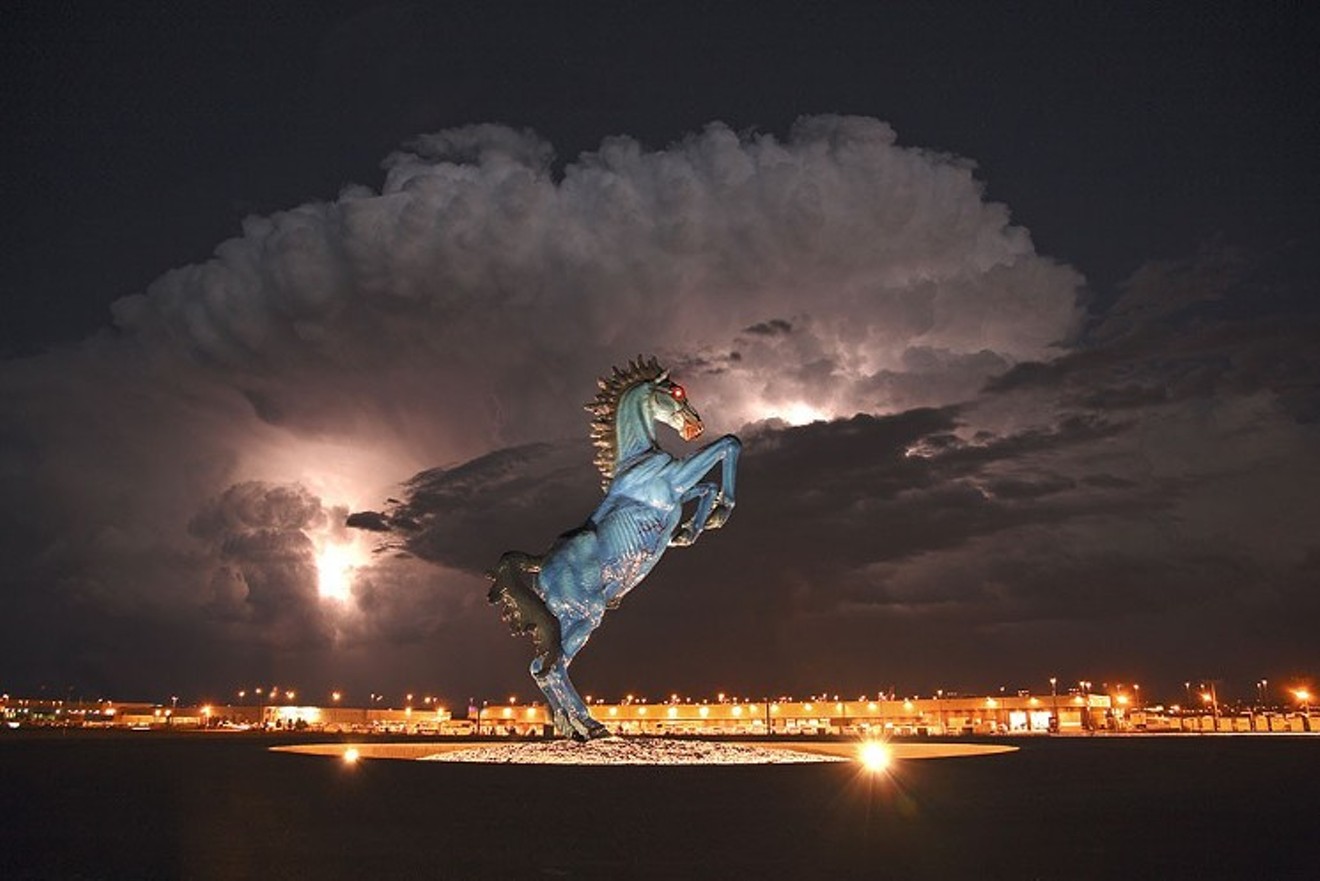 The best airport publicity photo of all time. flydenver.com
Twenty-five years ago today, I was on the first flight out of Denver International Airport.

Definitely the first flight. Probably. Make that maybe. But it was a crazy whirlwind, nonetheless.

The first takeoff from DIA is officially credited to United Flight 1062 to Kansas City, which was scheduled for 6 a.m. on February 28, 1995. But the folks at 103.5 The Fox staged a publicity stunt intended to beat this jet into the sky. Station bosses chartered a plane, filled it with super-fans and members of the media (including yours truly) along with morning-show hosts Michael Floorwax and Rick Lewis, and made arrangements for it to hit the runway and head to New Orleans for Fat Tuesday during the wee hours, early enough to be the true number one.

Did they succeed? Well, we were certainly told we were in the air before the United flight. But if the expenditure was intended to result in a PR bonanza, it failed. The next day's New York Times gave United 1062 the credit, and a quarter-century later, 9News is still doing the same thing.

There was certainly a mad scramble to accomplish this feat. Passengers were rushed through the terminal so quickly that we hardly had a chance to take in the massive new facility — one whose new-airport smell contrasted strongly with the scent of obsolescence hanging over Denver's previous airport, Stapleton, whose lame-duck status had caused it to become increasingly shabby during the years leading up to its successor's debut.

Of course, DIA's state-of-the-art baggage system turned out to be an expensive boondoggle. But we were more focused on the snowstorm that was blowing through the area that morning, as if to prove that DIA was actually an "all-weather airport," as city officials had been breathlessly declaring. This claim would prove to be vastly overstated, but after our plane was repeatedly doused with de-icing chemicals, we managed to get aloft, albeit amid enough turbulence to make a nervous flyer like myself fear I'd soon be losing my honey-roasted peanuts.

The situation was far worse for Lewis, with whom I reminisced about the junket during an appearance on The Fox this morning. During de-icing, the flight sat on the runway for an extended period of time — possibly hours, he thinks, though it didn't seem nearly that long to me. Then again, the demands on him and Floorwax were much higher. The liquor had already started to flow — so much so that the booze supply ran out at about the same time the toilets in the plane became unusable. To prevent a full-scale rebellion, the hosts were pressed into doing standup comedy routines over the public-address system.

In short order, the charter touched down in the Big Easy and the press gaggle was transported directly to the French Quarter, where we were dropped off in the middle of a Mardi Gras bacchanal already in progress. But we weren't joined by Lewis and Floorwax, a recovering alcoholic who was freaked out by being trapped in a confined space with so many drunk people. Within earshot of the Fox faithful, Lewis recalls, Floorwax called his travel agent from a pay phone (yes, those were still a thing in 1995) and demanded a ticket for a flight back immediately — and he got one. Lewis says the two of them had something to eat, then zipped back to Denver ahead of everyone else.

I had a much better time. I'd never been to New Orleans before, let alone for its signature event, and I spent the day goggling at celebrants in crazy costumes (or nothing at all) as they took part in day drinking before day drinking was cool and hurled tchotchkes from parade floats. I collected so many strings of beads that some still remain 25 years later; my wife wore two strands of them earlier this week to mark the day before Lent at the Catholic school where she serves as principal.

That evening, our gaggle was collected and taken to the airport for the return jump to DIA — and remarkably, no one was left behind (unless that went unmentioned, which is certainly possible). When we arrived in Denver, the hour was very late and the temperature was bone-chilling, especially after the more moderate climate in Louisiana. But we were warmed by the knowledge that we'd forever be known for taking the first flight out of Denver International Airport.

That didn't quite work out the way we anticipated. But at least we know. Or think we know.

This post has been updated to include the memories of Rick Lewis.
KEEP WESTWORD FREE... Since we started Westword, it has been defined as the free, independent voice of Denver, and we'd like to keep it that way. With local media under siege, it's more important than ever for us to rally support behind funding our local journalism. You can help by participating in our "I Support" program, allowing us to keep offering readers access to our incisive coverage of local news, food and culture with no paywalls.
Make a one-time donation today for as little as $1.