A Federal Case: After Ten Years, Jefferson Park Will Be Getting Safer Streets “Walkability within Jefferson Park is excellent," he says. "But we have major arteries on the north, east and west sides of the neighborhood. Trying to cross any of those barriers on foot is very challenging, particularly with the Federal Boulevard barrier. In recent years as more businesses have opened, it’s really a difficult barrier for residents on both sides of Federal to cross over to the businesses on the other side.”

Michael Guieetz has been living near Eliot Street for twenty years and has seen the same challenge. Jefferson Park is a nice place, but “to really go outside the neighborhood as anything besides in a car seems to be dangerous,” he says, adding that it's nerve-racking to watch people try to cross Federal from the 2900 block of West 25th Avenue, which is home to a coffee shop and liquor store, among other businesses.

Residents have been working to make the neighborhood safer for a decade. 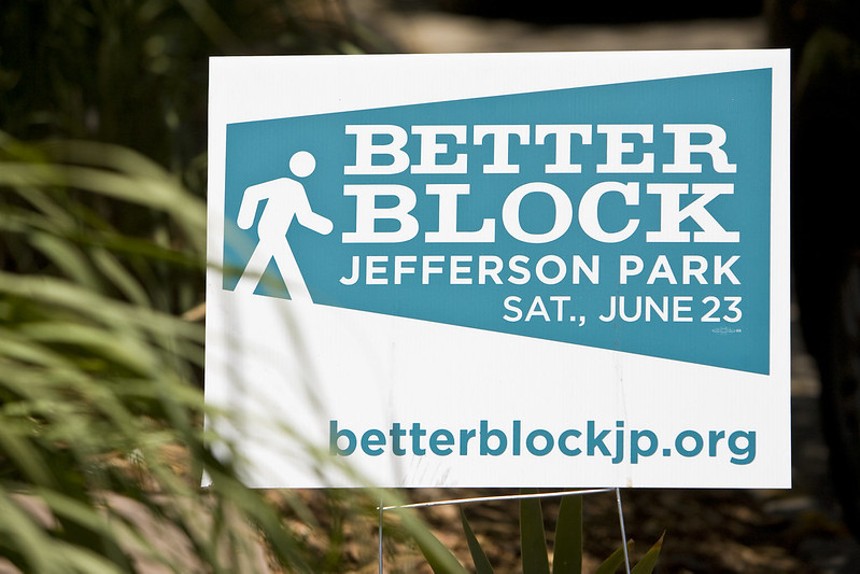 A sign from the Better Block Jefferson Park demonstration in 2012.
Denver Streets Partnership
In 2012, they held an event titled Better Block Jefferson Park, to demonstrate what a safe and accessible street for pedestrians could look like. For one day, the community filled empty storefronts along West 25th with exhibits, hosted live music and created a mural at the intersection of 25th and Eliot Street. This demonstration-turned-block party was the beginning of WalkDenver, a group that advocated making Denver one of the most walkable cities in the country. (WalkDenver later merged with Bicycle Colorado to form the Denver Streets Partnership, an independent coalition of pedestrian and bike groups that continues to push for all of Denver's streets to be more people-friendly.)

In 2016, WalkDenver, along with the Federal Boulevard Business Improvement District and Jefferson Park United Neighbors, started advocating for Jefferson Park to be included in Denver's Elevate Denver Bond Program, a $937 million program with over 460 projects meant to revitalize and improve the safety of Denver. The groups succeeded in getting the area in the 2017 program, and $2.85 million was allocated to upgrades for pedestrians on Federal Boulevard by Jefferson Park.

Another $3.8 million is now going to that project through the Safer Main Streets Initiative, a Colorado Department of Transportation program developed in 2020 to support safer streets. Eleven people, including seven pedestrians, died in car crashes on Federal Boulevard in 2017; between 2012 and 2017, 22 percent of all fatal pedestrian-car collisions in Denver happened on Federal. To make the entire area safer, CDOT committed to making improvements along Federal Boulevard from Barnum Park all the way up to West 52nd Avenue.

Denver's Department of Transportation and Infrastructure designed the improvements for Jefferson Park, which will stretch along Federal from West 23rd to West 27th avenues and include changes to streets, the addition of safety structures and an increase in pedestrian walking spaces. More pedestrian crossing signals will be installed on Federal, making it safer to walk or bike across the busy street; new curb ramps will go directly toward crosswalks.

"If you stand there long enough, you see people kind of darting through traffic where people are not supposed to be crossing," says Leslie Twarogowski, executive director of the Federal Boulevard BID. "We’re trying to entice people to come down to the intersection rather than the mid-block section."

The improvements will continue for a block to Eliot on West 25th, which will be narrowed to slow cars. "It's nice to have a big wide street," says Altieri. "The downside to that is that there is so much room for traffic traveling east or west along 25th."

Adam Segura, general manager at Parkside Liquors, at 2915 West 25th, is happy that the street will be narrowed; he sees cars fly down it every day. Most of his customers get to the store on foot, he adds, so he'll wait to see how construction impacts the business.

The area where pedestrian improvements will be done in Jefferson Park.
Federal Boulevard BID
But the upgrades are also designed to encourage more foot traffic, with gathering spaces on the sidewalk, and DOTI will be upgrading bus stops for transit users by providing benches with shade, a rare luxury by RTD stops. “The goal is that people will come and enjoy [the Jefferson Park neighborhood], because right now the majority of people who come to this district are in cars,” Twarogowski says.

“Any type of enhancements the city can make would be welcome,” Guieetz adds.

Construction on these improvements will begin in the first quarter of 2023, and the project should be done by the fall of 2023. In the meantime, the Federal Boulevard BID is seeking applicants for a public art project for Jefferson Park; it has a budget of $49,000 for an art installation that will go somewhere near 25th and Federal. The deadline for entry is August 29.
KEEP WESTWORD FREE... Since we started Westword, it has been defined as the free, independent voice of Denver, and we'd like to keep it that way. With local media under siege, it's more important than ever for us to rally support behind funding our local journalism. You can help by participating in our "I Support" program, allowing us to keep offering readers access to our incisive coverage of local news, food and culture with no paywalls.
Make a one-time donation today for as little as $1.
Katrina Leibee, a recent graduate of Colorado State University, is an editorial fellow at Westword, covering politics, business and culture.
Contact: Katrina Leibee
Follow:
Twitter: @katrinaleibee