Leilani Johnson's food truck was on the block where the July 17 shooting took place. RJ's TacoWich Facebook
“We go both ways” is the slogan for RJ's TacoWich, Leilani Johnson’s food truck, where every menu item can be served as either a taco or a sandwich. But as Johnson sees it, there are no two ways about what the Denver Police Department did to food trucks late last month, when it announced that the trucks would no longer be allowed to operate between 19th and 20th streets on Blake Street, 19th and 21st streets on Market Street, and 20th and 21st streets on Larimer on Fridays and Saturdays.

“It’s total bullshit,” Johnson says. “I don’t disagree that food trucks can cause a hindrance because there are congregations of people and they’re bigger vehicles, so it might change visibility, but I think there are so many other solutions that nobody discussed.”

The move came after DPD officers, responding to reports of an altercation and trying to subdue a man who seemed to have a gun, shot into the crowd at 20th and Larimer streets at let-out on July 17, injuring six bystanders. Johnson was just down the street at her truck. At first, she and her employee didn't realize that anything was happening, but then they heard male voices telling them to get out of the area immediately. They closed as quickly as they could.

Since last summer, the DPD has been searching for ways to reduce the crime that occurs around let-out in downtown Denver, when bars must get their patrons out the door by the 2 a.m. closing time. The department touted moving food trucks off those streets as one way to decrease crowds, chaos and crime, but food truck owners didn't have a chance to state their own case: that the trucks give people a place to go, help people sober up. They weren’t involved in the decision, and Johnson says they still haven’t gotten a clear answer on how the decision was made, or when they might be able to return to the area.

So she's started a petition to get food trucks back in their usual spots, arguing that sending them outside of LoDo and the Ballpark neighborhood harms the small businesses and won’t fix the crime problem in the area anyway.

Once food trucks obtain a retail food mobile license from the Denver Department of Excise and Licenses, they can apply to pay to bag the meters where they plan to park through the Denver Department of Transportation and Infrastructure. Bagging a meter costs $25 per space per day in prime locations like LoDo. On July 28, Johnson was told by DOTI that her application for her usual space that weekend would be denied: The DPD was banning the trucks from that hot spot.

On most Friday and Saturday nights, RJ’s TacoWich had set up in front of Herb’s Hideout, at 2057 Larimer. For the past three weeks, Johnson has had to settle for a spot between 22nd and 23rd streets on Larimer, where she’s done only about half the business she would normally do — and in the process, she managed to anger a resident who lives nearby and was irritated that the truck took up street parking.

“There are so many other ways we could solve this problem that don’t involve shooting your small-business food trucks in the foot,” Johnson says. She's advocating for a meeting between public safety officials, other downtown businesses and the food truck owners to consider alternatives. 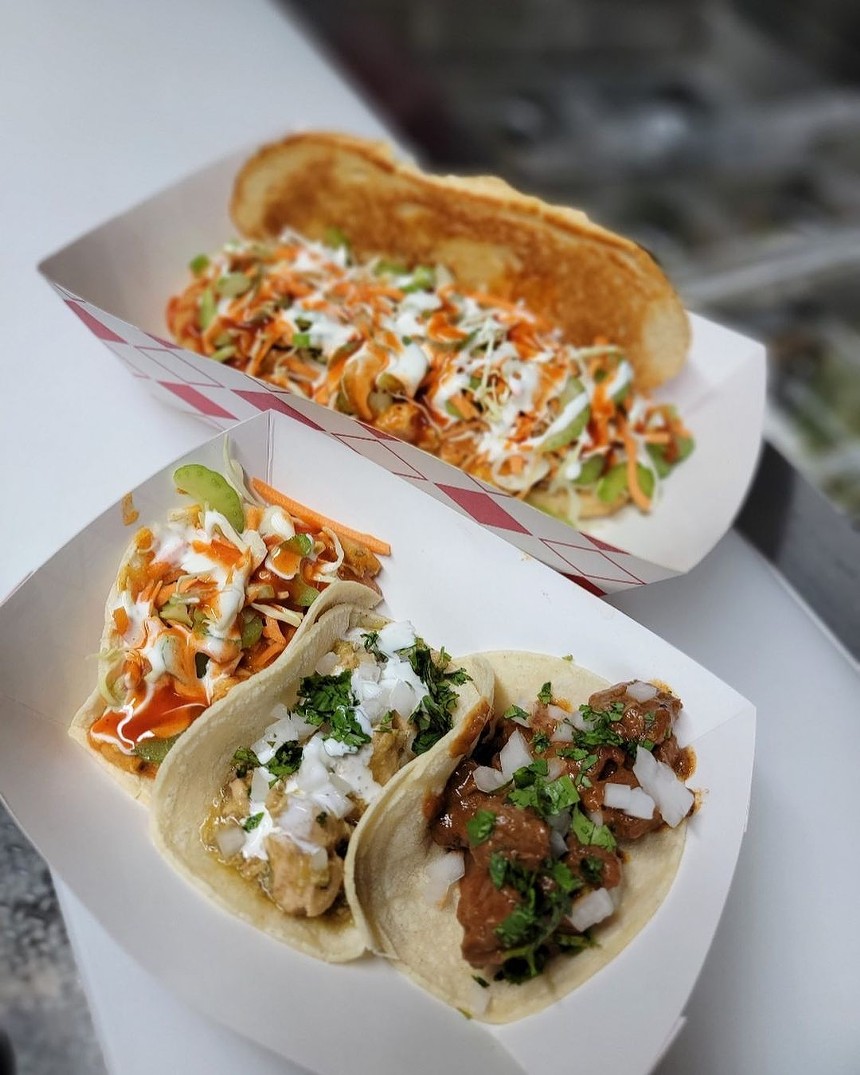 Food at the truck can be either a taco or a sandwich.
RJ's TacoWich Facebook
For example, she suggests closing those busy streets to vehicle traffic on weekend nights so that food truck windows could face the street rather than the sidewalk, giving everyone more space and creating less congestion. But instead of being able to work on solutions with the city, she and other food truck owners have had to scramble to change their own business plans.

Johnson pre-prepares the meats for her tacos and sandwiches before she sets up shop, a process that takes hours. After the ban took effect, she invested in a vacu-seal product to freeze the excess, but she isn't sure how her business can continue to survive without the crowds she used to see on summer nights.

In order to not pull winter shifts in the truck, which are brutally cold and not nearly as busy, Johnson’s business plan calls for making about $5,000 per week during warmer months. Because the truck was involved in a crash on Interstate 70 in April, she'd already planned to add weekday shifts and events, but losing her prime weekend spot has made her job tougher.

“I feel like I’m playing catch-up on something that I didn’t see coming,” she says.

On August 11, several food truck owners did get to talk with a DPD official, who told them that the earliest the ban might be lifted was next week, but there might be new restrictions in place, such as closing by 1 a.m. Johnson says the owners will meet with the DPD again on August 17, and she hopes that the city listens to their concerns.

“You can’t make these decisions by yourself if it’s going to so drastically and negatively impact people who are contributing to your city,” she says. “When are we going to rescind this ban and really be productive with our discussions about long-term solutions?”
KEEP WESTWORD FREE... Since we started Westword, it has been defined as the free, independent voice of Denver, and we'd like to keep it that way. With local media under siege, it's more important than ever for us to rally support behind funding our local journalism. You can help by participating in our "I Support" program, allowing us to keep offering readers access to our incisive coverage of local news, food and culture with no paywalls.
Make a one-time donation today for as little as $1.