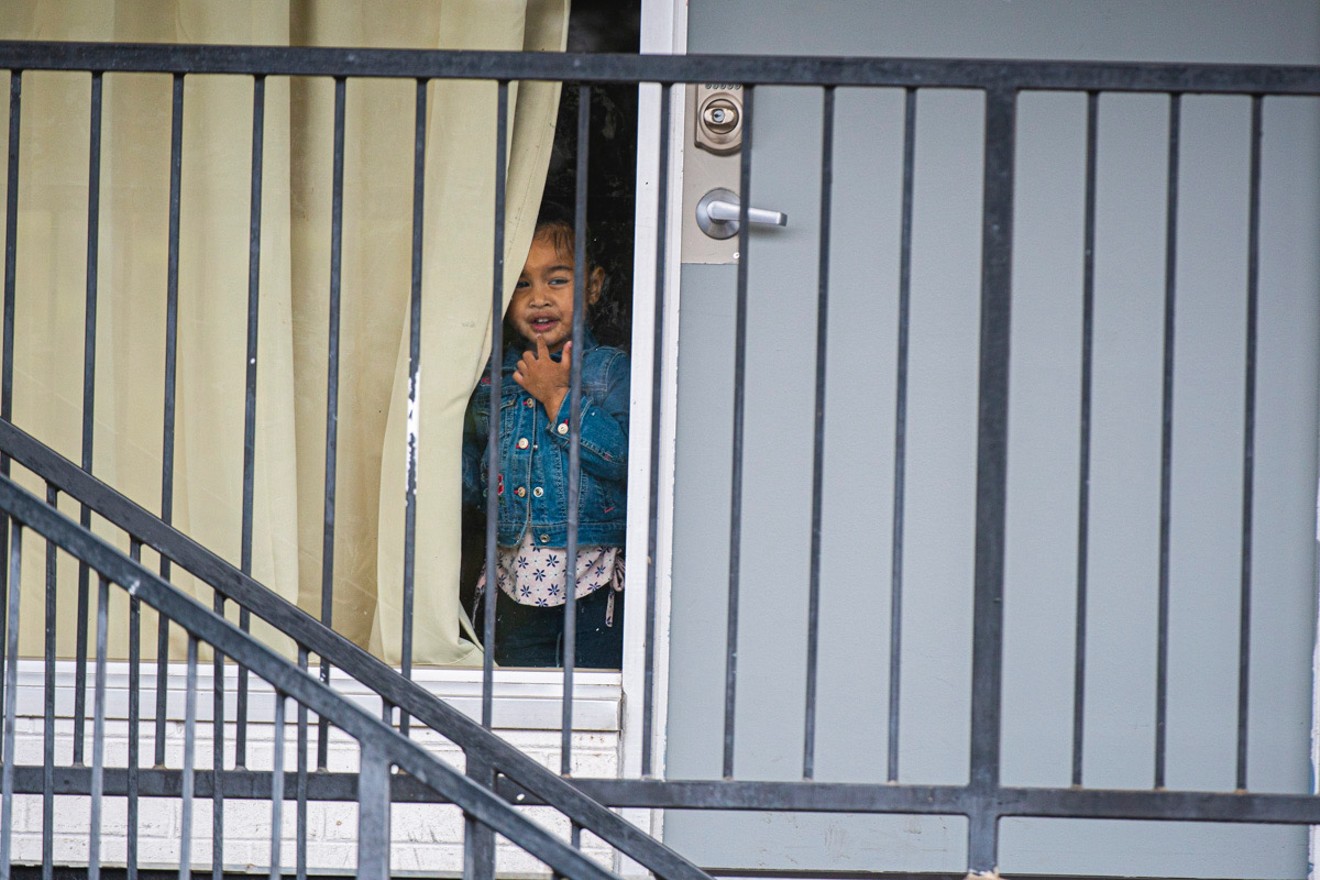 The VOA Family Motel is getting a makeover. Evan Semón
The former Aristocrat Motor Lodge has gone through many owners since the early 1960s, when Colfax Avenue was the main transportation artery through Denver and the Rocky Mountain West. The motel, now a shelter run by the nonprofit Volunteers of America Colorado, hasn't received a significant makeover in many decades. But that will change over the next few years.

"You know, this is the first time in Denver's history that [general obligation] bonds will be used to support housing and shelter efforts," Mayor Michael Hancock said on April 13, standing in front of what is now known as the VOA Family Motel at 4855 West Colfax Avenue. "This shelter and the dedicated staff who will fill the space prove that thoughtful social infrastructure can make all the difference in the lives of families and help set a new trajectory to stabilize them for the long term."

Hancock and other city officials, as well as leadership from VOA Colorado, were touring the motel to highlight the award of $12.2 million in city bond money for a planned renovation of the facility. The motel is located on two parcels of land along West Colfax, which are separated by Xavier Street.

"We are grateful," said Dave Schunk, president and CEO of VOA Colorado. "It has had remarkable success in transforming families to self-sufficiency."

VOA Colorado has owned the motel since 1999; the nonprofit bought it at the request of the City of Denver, which was already sending families experiencing homelessness to motels along Colfax. VOA Colorado receives $1.2 million annually from the city to run the motel.

The motel has 45 rooms, thirty of which are used for families and fifteen reserved for veterans and people in respite; the families typically stay for two to three weeks. Before families land at the motel, the city and service providers work jointly to find shelter space, first looking to see if a relative or a friend can take them in temporarily. If that's not an option, a caseworker will refer the family to the VOA Family Motel.

While there, families receive guidance from case managers, who make sure they have some form of housing after they leave. About 3,000 people stay at the VOA Family Motel every year. But given the facility's origins, it's not really set up to serve as a shelter for families. There's little space for kids to play, and very limited communal and dining space. 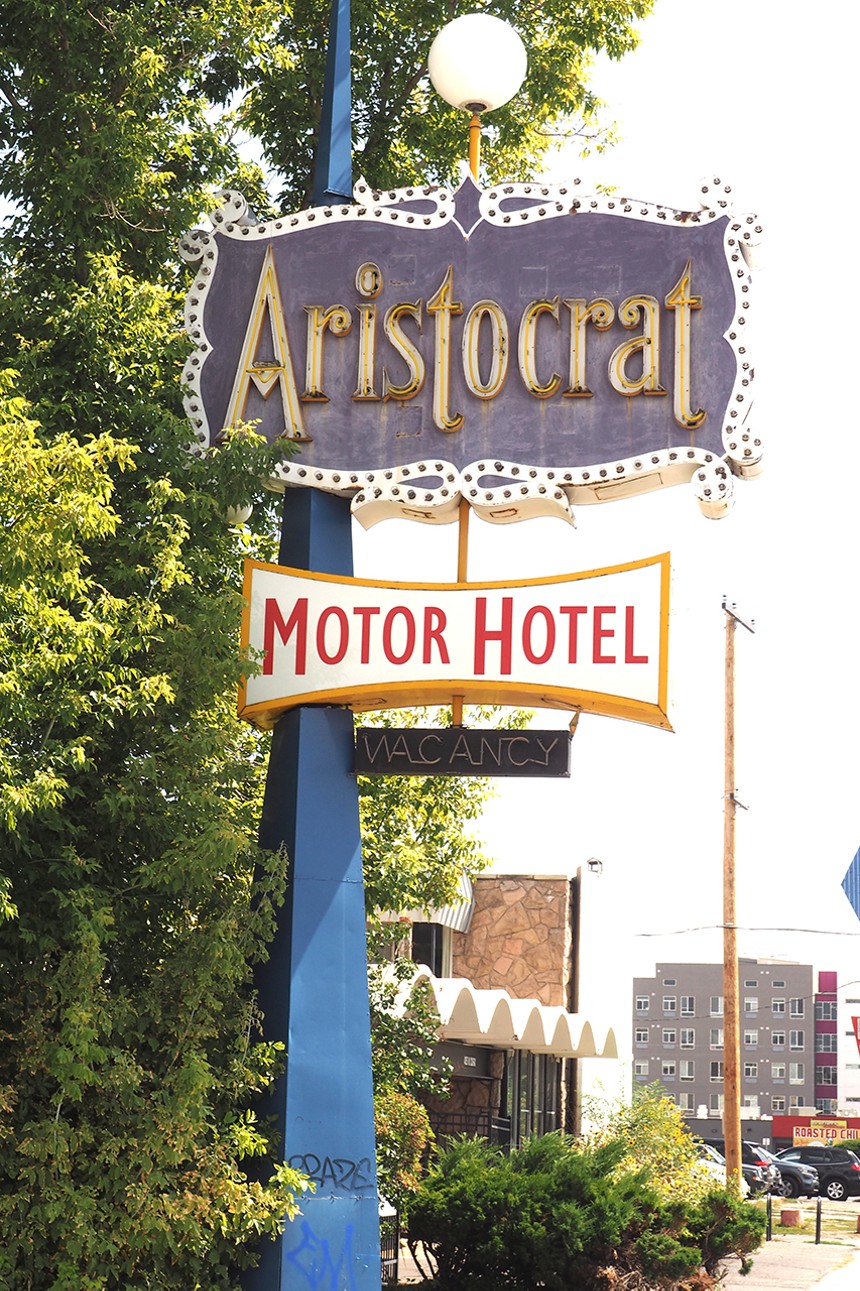 The Aristocrat is just a sign today.
Jay Vollmar
The $12.2 million will cover a large chunk of the approximately $16.5 million renovation project. The first stage will involve turning one side of the two-story motel into a five-story building; VOA Colorado hasn't yet settled on whether that construction will focus on the western or eastern section of the motel. The other side will become affordable housing.

VOA Colorado expects to break ground on the development in May 2023 and wrap up the project within sixteen months of groundbreaking. While the project is underway, the nonprofit plans to lease another motel or two to house families.

In considering plans for the project last year, the Denver Department of Community Planning and Development said that the motel was potentially eligible for historic designation, with a landmark analysis noting that "the Aristocrat continues to clearly convey the feeling of a mid-twentieth-century motel type, evoking a strong sense of the past."

But no one filed an application for historic designation, so the project can go forward without any specific portions of the current structures being saved. Still, VOA Colorado plans to preserve the sign if possible. according to Vanessa Clark, a spokesperson for the organization.

"We know that the sign is important to the community," Clark said. "And then, as far as scalloped roofing goes, we are trying to figure out with our architect if we can incorporate scalloping in our design, but...we probably won't preserve that specific material, because it's old and problematic."

The bond money for the renovation project comes from the RISE Denver program, which voters approved in November 2021. On April 11, Denver City Council okayed a large bond-spending package that earmarks $38.6 million of the GO funds for facilities that serve youth, families and people experiencing homelessness.
KEEP WESTWORD FREE... Since we started Westword, it has been defined as the free, independent voice of Denver, and we'd like to keep it that way. With local media under siege, it's more important than ever for us to rally support behind funding our local journalism. You can help by participating in our "I Support" program, allowing us to keep offering readers access to our incisive coverage of local news, food and culture with no paywalls.
Make a one-time donation today for as little as $1.