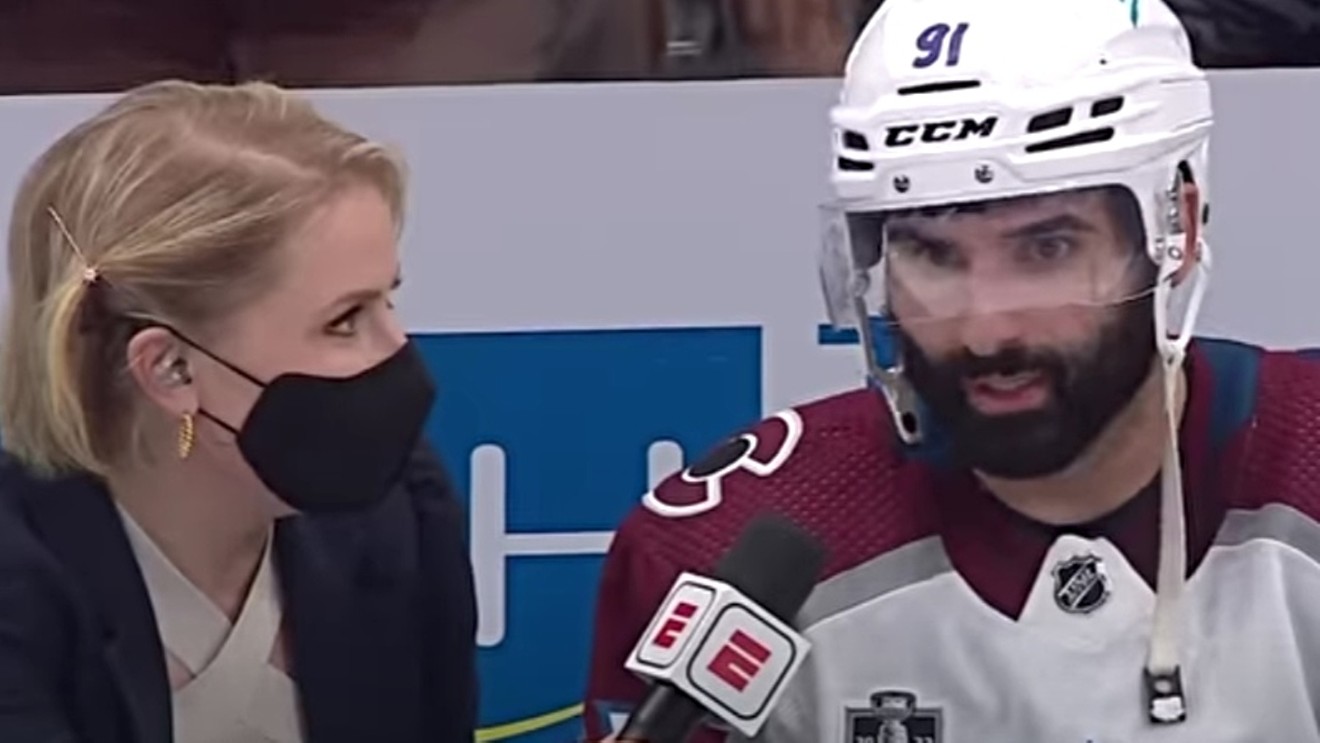 Nazem Kadri during a post-game interview with ESPN's Emily Kaplan. NHL on ESPN via YouTube
Nazem Kadri became the first Muslim to win the Stanley Cup when the Colorado Avalanche beat the Tampa Bay Lightning on June 26, securing Colorado’s first major sports championship since the Broncos won Super Bowl 50 over six years ago.

Hamza Ally, now fifteen, went to the Broncos celebratory parade when he was nine years old; he remembers it as fun and crazy. This time, the Muslim boy is thrilled he can show support for Kadri at the Avalanche parade.

“He’s a Muslim player who is in a sport that doesn't really have a lot of that, and it's not super diverse,” Ally says. “It's pretty unusual, and it makes you feel like you could do something unusual like that in any type of field, whether it be sports or just work in general.”

Ally and his nine-year-old brother, Yahya, are avid athletes, involved in sports including cross-country, basketball, skateboarding and rock climbing. Yahya, who has autism, participates in the Special Olympics and also plays through the local rec center. He recently got to meet Avalanche mascot Bernie at a field hockey clinic through the Special Olympics, so seeing the team win made him happy.

Their mother, Linda Amin Badwan, has always been a Colorado sports fan. After immigrating to Denver from Palestine when she was three, she was back in Palestine for fourth through six grades, then moved back to Denver permanently; her father raised her on the Broncos. She then went to Colorado College, where the hockey team excelled during her time at the school, so she introduced her sons to the sport.

The family is just one of many Muslim families in Denver. There are about thirty mosques up and down the Front Range. State Representative Iman Jodeh, the first Muslim lawmaker in Colorado history, says the Muslim population in the area is 100,000 strong.

Jodeh attended the same mosque that Badwan did when she was growing up. Born in Denver, Jodeh is the daughter of Palestinian parents who immigrated to the United States. Being the child of immigrants makes her particularly grateful for the opportunities she has; she notes that Kadri is another example of the intergenerational wins that come from the sacrifices parents make to immigrate. Kadri’s grandparents moved to Canada from Lebanon when his father was a child; Kadri was born and raised in Canada.

“The beautiful thing about being a Muslim is that you don't just look Muslim based on your appearance,” Jodeh says. “You can be white, you can be Black, you can be Asian. It's just that shared way of life, and so when we look at [Kadri] making history, we're incredibly proud.”

Ally says that most people he knows who are Muslim watch soccer more than they do hockey, but Kadri’s presence on the Avalanche drew them in. A friend from the family’s mosque was on TV after the team won Sunday’s game, leading a chant at the Ball Arena watch party.

Kadri played a key role in the Avs clinching the Cup, scoring the game-winning goal in overtime during game four after missing the first three games of the series with a broken thumb. That persistence is a lesson Badwan hopes her sons learn from Kadri.

Along with physical injury, Kadri dealt with racism during the Avs run for the Cup, particularly in the second round against St. Louis, when Kadri collided with Blues goalie Jordan Binnington; Binnington was injured, and the team announced he wouldn't play the rest of the series.

After the game, Binnington allegedly threw a water bottle at Kadri while Kadri was doing a post-game interview with TNT. Though the NHL ruled his on-ice collision with Binnington was acceptable, Kadri has a history of suspensions, including one for an illegal check to the head in the Avalanche playoff series against the Blues in 2021.

Blues fans didn't react well to the hit, with Kadri receiving threats after the game. Kadri's wife shared screenshots of some of the hateful and racist messages Kadri received on social media.

Kadri answered back in game four of that series, scoring the first road hat trick in Avalanche playoff history. “For those that hate, that was for them,” Kadri told TNT after the game.

Jodeh says that the way Kadri responded with his performance rather than by lashing out made her proud. Although it’s unfortunate that Kadri experienced threats and racism, she adds, it also made him relatable to members of the Muslim community, who face the same dynamics in their daily lives.

“We can often feel marginalized, and in those moments, we can also feel very alone,” Jodeh says; she hopes Kadri knows he had a community lifting him up during that time.

Like Badwan, Maegan Oyedele is a Muslim woman who wears a hijab. Both women say they have been treated with prejudice because of that choice. They hope Kadri’s visibility will help normalize the place of Muslims in society.

“The more of us who come out and connect with the rest of the world, the more all of those negative, loud ideologies are not passed around,” Oyedele says.

The impact of the Avs' win on Muslim and Arab children is important to Jodeh, too. She has seven nieces and nephews who are looking forward to wearing a Stanley Cup-winning jersey of a Muslim and Arab athlete.

Jodeh thinks she knows a little of what Kadri might be feeling, since she was also the first in her field. “I'm so honored to be the first, but there are times that you can feel alone because you don't have your own tribe to be in,” she says. “But you carry that [feeling] because you want to set it up for the next generation. I say it all the time, and I'm sure [Kadri] agrees: I'm the first, but not the last. We're holding the door open.”

Ally knows the door is open for him. “Seeing that barrier broken…it makes you feel more comfortable to join that field or even break a barrier of your own if you wanted to,” he says.

Sports were a way for her to fit in as an immigrant, Badwan says. She became a naturalized citizen when she was in high school, where she attended school sporting events and, of course, rooted for the Broncos. It helped her bridge her identity as both a Palestinian and an American.

“That's something I've passed on to my boys, that we're American, too,” she says. “It's not always easy to feel like we belong that way, sadly. But I feel sports is another avenue for people to connect. Because when I'm in the stands, cheering with everybody else, all those barriers and all of that disappears. We're all there for the same cause, and we're all there rooting for the same team.”
KEEP WESTWORD FREE... Since we started Westword, it has been defined as the free, independent voice of Denver, and we'd like to keep it that way. With local media under siege, it's more important than ever for us to rally support behind funding our local journalism. You can help by participating in our "I Support" program, allowing us to keep offering readers access to our incisive coverage of local news, food and culture with no paywalls.
Make a one-time donation today for as little as $1.