Colorado Avs fans at the DNVR sports bar went wild after the team clinched the Stanley Cup. DNVR via YouTube
After the Colorado Avalanche defeated the Tampa Bay Lightning 2-1 on June 26, winning the third Stanley Cup in franchise history, Denver erupted. And while some of the celebrations got a wee bit out of hand, the focus was on joy rather than destruction.

In advance of game five in Denver on Friday night, the Denver Police Department had encouraged fans not to destroy the city in their exuberance should the Avs clinch the Cup at home. But the warning proved to be premature, as the Lightning managed to extend the series with a hard-fought 3-2 victory. And because fans did indeed get rowdy at the free watch party that night, breaching a fence at the Tivoli, Auraria campus authorities canceled the Auraria watch event for Sunday night.

But people still found places to catch the match, including a paid Ball Arena event, and in the hours before the game, the DPD shared a tweet meant to inspire a classy response to the hoped-for Avs triumph:


We believe the @Avalanche will #FindAWay to bring home the @StanleyCup and if they win Game 6 tonight, we want to remind fans to act like we've been here before, because we have... Be cool, have fun and #StayOutOfThePenaltyBox!#GoAvsGo pic.twitter.com/6IOJVmttFp

During Sunday's contest, the Avs seized the lead in the second period, and made it clear they meant to hold on to it. As the clock ticked down in the third, the DPD tweeted: "Officers are staging around Ball Arena and downtown to assist the crowds and heavy vehicular traffic with exiting the downtown area. During the post-game out crowd, vehicle access into downtown will be restricted. Please drive safely."

Shortly thereafter, the results became final, and those stuffed into Ball Arena went berserk, as seen here.
Fans at local watering holes did likewise. As an example, eyeball the scene at the DNVR sports bar:
Meanwhile, Avs lovers took to the streets — and many of them recorded video of the occasion. See an example below.
Even though Interstate 25 exits into downtown were quickly closed, central Denver was clogged with traffic, prompting the DPD to offer a low-key warning to drivers at 9:30 p.m.: "Motorists leaving the downtown area may encounter large crowds. Find an alternate route if you are driving towards a large group in a roadway — do not attempt to make your way through crowds of pedestrians. Please drive and celebrate safely, Denver."

For the most part, Denver appears to have done so, albeit while giving their horns the sort of workout heard in the following clip:
The worst behavior caught on camera involved fireworks shot off with bystanders mere feet away and chairs that wound up in a pile, as seen in this CBS4 Denver image. 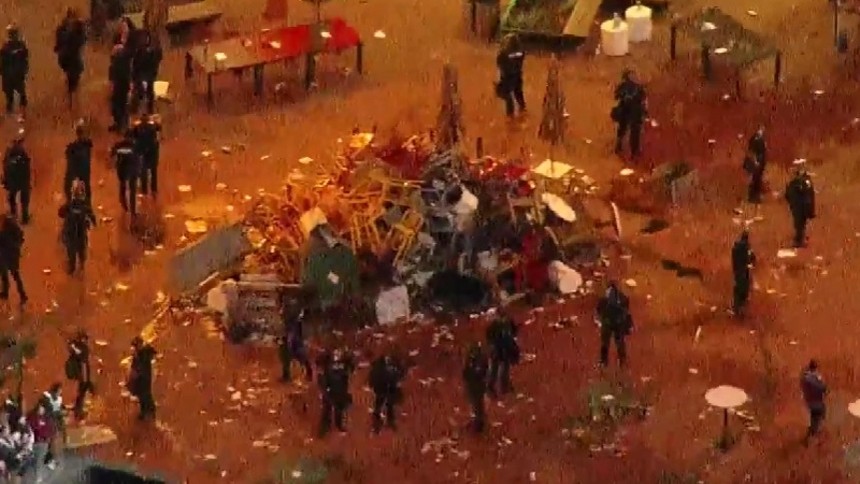 Downtown Denver survived the Colorado Avalanche victory celebration last night, but a few chairs are worse for the wear.
CBS4 Denver
The station captured at least one on-camera arrest; the DPD has yet to issue information about overall citations. However, folks stuck around for hours after the game, prompting the Denver Office of Emergency Management to send this tweet at 12:04 a.m. today: "Alright Denver: We know you're psyched about the #StanleyCup win, because we are too! We also know tomorrow is Monday. Let's clear the streets and get home safely. Save some of your energy for Thursday's celebration, because you're gonna need it! Goodnight Avs Country! #GoAvsGo."

The victory parade has been scheduled for 10 a.m. Thursday, June 30, with a rally before and after in Civic Center Park.

Plenty of Denver residents chose to watch the game at home — particularly those with young families. Here's one girl thrilled by the final countdown.... ...and a boy narrating his feelings.
Even puppies got into the act:
The Colorado Avalanche: bringing creatures of every species together.
KEEP WESTWORD FREE... Since we started Westword, it has been defined as the free, independent voice of Denver, and we'd like to keep it that way. With local media under siege, it's more important than ever for us to rally support behind funding our local journalism. You can help by participating in our "I Support" program, allowing us to keep offering readers access to our incisive coverage of local news, food and culture with no paywalls.
Make a one-time donation today for as little as $1.