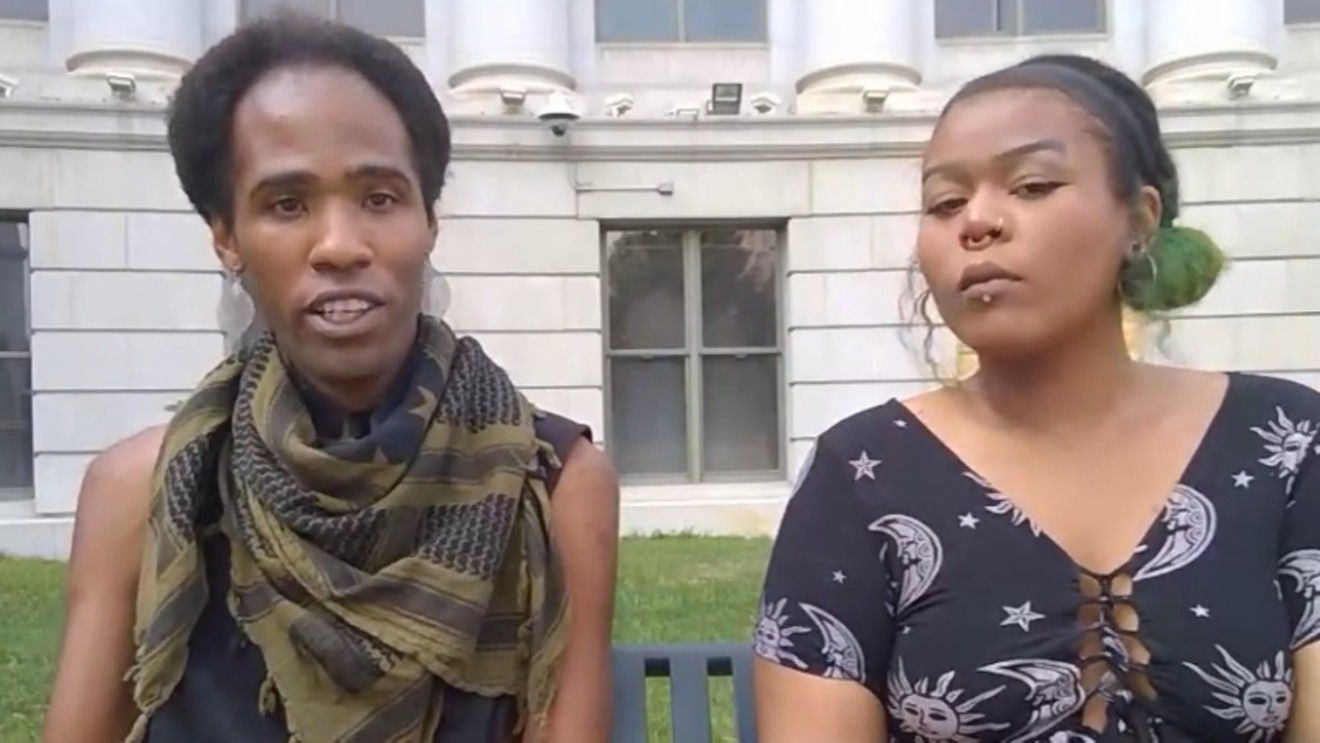 Gabriel "Echo" Lavine and Azria "Az" Arroyo of the Afro Liberation Front as seen in a recent video. Afro Liberation Front
Today, September 16, Gabriel "Echo" Lavine, founder and co-director of the Denver-based activist organization Afro Liberation Front, will have a virtual court hearing regarding a charge of second-degree felony assault for allegedly spitting on a Denver Police Department officer during an early July protest. But Lavine, who identifies as non-binary and uses they/their pronouns, says that any saliva that may or may not have been expelled in the incident resulted from being shot four times in the face by pepper-spray projectiles seconds earlier.

"The only thing I remember was being in distress and trying to get the chemicals out of my throat, out of my nasal passages," Echo contends. "There was nothing intentional. I was just coughing, trying to breathe."

That Echo would be accused of a crime under such circumstances is symbolic of what Echo, ALF co-director Azria "Az" Arroyo and ALF chief of staff Jenn Neese characterize as a concerted campaign against the group's members by the Denver Police Department for peacefully advocating in favor of the DPD being de-funded.

"We are being surveilled, followed, watched, intimidated and silenced by the Denver police for our protest actions," Neese says. "They're retaliating against us for wanting to abolish their force."

A DPD spokesperson, corresponding via email, declines to discuss the assault beef against Echo "since that case is currently pending in the courts," but stresses that "DPD respects the rights of residents to demonstrate in a lawful manner. We encourage individuals to utilize the formal complaint process to request a review of department/officer actions they feel are inappropriate."

The Afro Liberation Front came together in early June, and since then, Echo, Az and/or Neese have been near-constant presences at a wide variety of demonstrations, marches and rallies, including a gathering on September 14 at the Denver City & County Building, where they objected to a new contract for DPD officers that included raises in 2022. Denver City Council voted down the proposal, which now must be renegotiated in advance of the current contract's December 31 expiration. 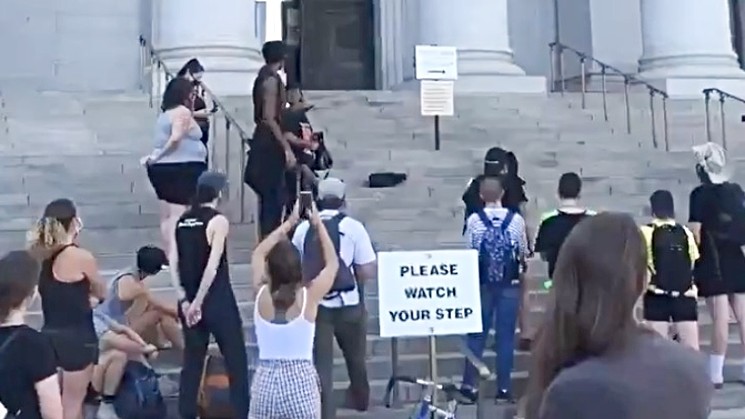 Members of Afro Liberation Front were among protesters demonstrating at the City and County Building in advance of a Denver City Council vote on a new Denver Police Department contract.
@JeremiahGarrick via @AfroFrontCo
The Afro Liberation Front isn't the only local protest group that feels targeted by the DPD, stresses Echo, who claims to have witnessed multiple instances in which officers appeared to be specifically tracking frequent demonstrators. This assertion mirrors charges made by the Colorado chapter of the National Lawyers Guild that some protesters in Denver have been pulled over and arrested before even arriving at events, for allegedly violating an obscure municipal statute by possessing helmets and other protective gear.

As for personal experiences, Echo cites visits to local grocery stores "where officers weren't present when we arrived but were there after the fact: pointing, nodding, consistently on the phone as I'm leaving, staring at me while they're talking." Moreover, Echo believes the cops weren't trying to disguise their activity; they appeared to want Echo to know they were watching their every move.

Az, meanwhile, filed a lawsuit against the DPD in late May after suffering chemical burns, throat blisters and diminished lung capacity, among other things, when officers fired pepper balls, tear gas canisters and more in her direction during a downtown Denver protest following the death of George Floyd. Ever since, she claims, she, too, has been singled out for what she characterizes as intimidating attention at the hands of DPD officers — such as the time when, during a rally, "officers staged on all sides of us, including two with K-9 units."

The ALF members cite Echo's arrest on the assault accusation, which took place around two weeks ago, well over a month after the actual incident, as a case in point. They say that Neese's car was tailed by three police vehicles, two of them unmarked, following an action at the City and County Building two weeks ago. After they were pulled over, Neese was quizzed about a missing license plate (she wasn't charged with a violation), while an officer accused Echo of failing to use a seat belt, which was actually buckled at the time; it was concealed underneath a backpack on Echo's lap. Only then was Echo told about an outstanding warrant stemming from the spitting incident and taken into custody.

Later, Echo was brought to an interrogation room and introduced to a lawyer who was supposedly their public defender — but "weeks later, I found out I hadn't been assigned a public defender," Echo says, still wondering about the actual identity of the person who'd done the quizzing. "I honestly feel like my civil rights were violated at every turn."

And Echo believes that was intentional. "To be completely honest," Echo says, "I think this is in retaliation, because they knew I was considering a lawsuit. On the night they did those things to me, shooting me in the face with projectiles, I screamed that I intended to press charges and sue. I told them I was coming for their money and they should all be looking for new jobs — and I think that pissed them off. From that moment, I was on their radar."

The ALF founder doubts this scenario will change even if the assault charge is dropped, but they don't intend to stop speaking out against the DPD in any case. "I don't want to take it lying down," Echo says.
KEEP WESTWORD FREE... Since we started Westword, it has been defined as the free, independent voice of Denver, and we'd like to keep it that way. With local media under siege, it's more important than ever for us to rally support behind funding our local journalism. You can help by participating in our "I Support" program, allowing us to keep offering readers access to our incisive coverage of local news, food and culture with no paywalls.
Make a one-time donation today for as little as $1.