An image from our May 30 slideshow "Curfew, Law Enforcement Clear Out Protesters on Day Three." Evan Semón Photography
The Colorado branch of the National Lawyers Guild is castigating what it describes as "increasing violence and repression against protesters in the Denver Metro Area at the hands of and condoned by police." Singled out for criticism is Governor Jared Polis, for referring to acts of "criminal terrorism" in a tweet about violence that followed a peaceful protest in late August, and the Denver Police Department, which attorney Jessica Eve Jones, a volunteer organizer for the Colorado NLG, says has been arresting some demonstrators simply for donning helmets and other gear meant to protect them should they be attacked by officers suited up for battle.

Jones compares the tactic to Minority Report, a 2002 Tom Cruise movie based on a novel by science-fiction author Philip K. Dick, in which people are charged for crimes they're supposed to commit in the future before actually doing anything wrong. "It's insane," she says.

In the National Lawyers Guild statement, Jones takes on Polis for implying that protesters are criminal terrorists: "To have the Governor of Colorado equate property destruction as terrorism yet refuse to condemn police killings of unarmed Black men is unacceptable. Property can be replaced, Black Lives cannot," she maintains.

Rather than respond specifically to this accusation, a Polis spokesperson refers to a statement the governor made on June 2 following a wave of rallies prompted by the death of George Floyd at the hands of Minneapolis police officers. At the time, Polis said, "To those peacefully protesting, I want you to know that I see you, I hear you and I grieve with you. And more importantly, I want to work with you. Spray paint can be power washed, and windows can be fixed, but the black lives taken can’t be replaced or brought back, and the pain and injustices that our black community members have suffered will take years and decades to repair. I am ready, willing, and eager to be your partner in that work."

As for the arrests cited by the NLG, Jones notes that the statute being used — or, in her view, misused — is section 38-125 of Denver's municipal code, subtitled "obstruction equipment prohibited." Here's the passage:

The roots of the law stretch back a dozen years, Jones says: "In 2008, in anticipation of the Democratic National Convention coming to Denver, the Denver City Council passed the ordinance, which was specifically aimed at protesters of the DNC."

Problem is, the reference to a "dangerous or deadly weapon" is unconstitutionally vague, she believes. "In criminal law, a dangerous weapon can be your hands or your feet," Jones explains. "It doesn't have to be a knife or a gun. And now we're seeing people being pulled over on the way to protests just because they have bike locks and helmets in vehicles, which is absurd." 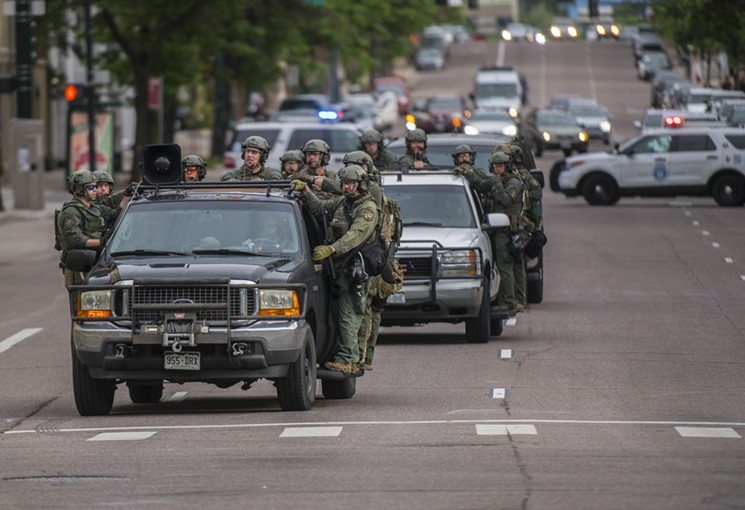 An image from our June 1 slideshow "Day Four of Peaceful Protests Turns Violent at Night."
Evan Semón Photography
Because many protesters "have experienced police violence" at the hands of the DPD, whose use-of-force tactics resulted in both a temporary restraining order (TRO) and a lawsuit against the department, "they feel the need to protect themselves," Jones continues. "So they're showing up with things like helmets. But simply by having a helmet, the police are saying it makes it clear they're going to a protest expecting police violence, and they're arresting them for it. So it's a vicious circle, and it makes no sense."

In its response to the National Lawyers Guild contentions, the Denver Police Department makes no reference to the DNC-era ordinance or its alleged misuse, instead sticking to generalities and suggesting that it's doing its best to dial down tensions. The DPD statement:


The Denver Police Department supports peoples’ rights to peacefully demonstrate — regardless of their perspective — and numerous peaceful demonstrations have occurred throughout the city without police intervention.

While the TRO is no longer in effect, during each protest response, DPD continues to ensure that its officers comply with the terms of the Stipulation it entered into with the Plaintiffs’ counsel in the pending lawsuit. With oversight by the Office of the Independent Monitor, DPD continues to investigate citizen complaints regarding the use of force during protests to determine whether or not officers acted in accordance with departmental policies.

DPD does not condone vigilantism or in any way support individuals or agitators gathering in Denver to incite or perpetrate violence. On Friday, August 28th, members of one group gathered at DPD’s District Six Station, were throwing objects at officers and refused to comply with dispersal orders. A second group gathered nearby allowed officers to approach them to discuss the dispersal order, and after a conversation aimed at deescalating the situation, this second group complied and left the area, thus successfully preventing a potential altercation between the groups.

Jones doesn't buy this stance. "I think the Denver Police has actually been escalating the violence of the protests and demonstrations over the past few months," she contends. "The cause and effect continues: Police show up in riot gear and the protesters respond accordingly — and then they're arrested for it."

The Colorado Chapter of the National Lawyers Guild condemns increasing violence and repression against protesters in the Denver Metro Area at the hands of and condoned by police.

"The arrests are violent, resulting in broken bones and other serious injuries. The criminal charges are being inflated to increasingly serious offenses. Protesters are being forced to risk their safety and freedom in order to exercise their right to free speech," said Jessica Jones — a local criminal defense attorney and volunteer organizer for the Colorado NLG. "It is a sad paradox that protesters experience police violence as they protest police violence."

In addition to violent policing tactics in the name of crowd-control, Denver Police recently began invoking a little-used ordinance that was originally passed in anticipation of the 2008 Democratic National Convention protests. The law bans activists from carrying protective equipment, chains, and bike locks.

"This ordinance has allowed police to criminalize activists before a protest has even started," said Jones.

Denver Police have even sanctioned vigilantism against protesters. In recent weeks, Black Lives Matter protesters have faced Far Right groups such as the Proud Boys. Activists have been doxxed and threatened online. Counter-protesters have appeared in force brandishing weapons and offering to support the police. After police tear gassed abolitionist protesters, Denver Police Lieutenant Mike Cody thanked the armed militia groups for their presence.

"To have the Governor of Colorado equate property destruction as terrorism yet refuse to condemn police killings of unarmed Black men is unacceptable. Property can be replaced, Black Lives cannot," said Jones.