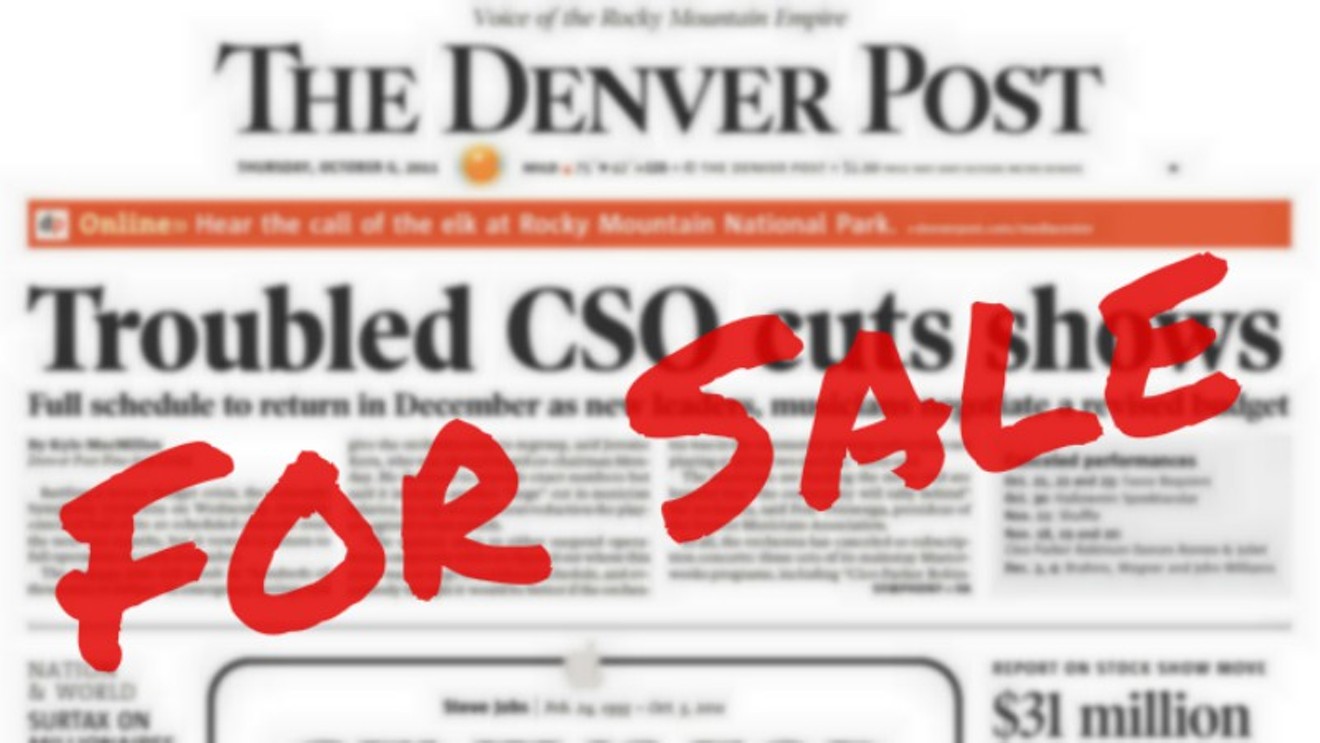 Courtesy of the Denver Newspaper Guild
After the Denver Post announced that it will be laying off thirty employees, or about one-third of its newsroom staff, the Denver Newspaper Guild, the union that represents 25 of the workers, published on its website a message to Alden Global Capital, the hedge fund that owns the paper and has been slowly gutting it: "Sell the Denver Post Now!" But when the guild tried to pay the Post to print a similar communiqué in its own pages for today's edition, the publication refused to do so, turning down thousands of dollars in the process.

According to Tony Mulligan, the DNG's administrative officer, corresponding via email, "The Denver Newspaper Guild attempted to buy an advertisement in The Denver Post...stating the Guild's position on the latest job cuts announced for The Post. We submitted the ad copy to run as an appeal to the community and we were initially given the price of $6,450 for a quarter-page ad to run on Tuesday, March 20."

But last Friday, March 16, "we received word that the newspaper will not run the ad," Mulligan continues, adding, "No reason was given."

In the meantime, here's the Denver Newspaper Guild message, which avoids mentioning the word "vulture" — a word Mulligan and others have used to describe Alden Global Capital. 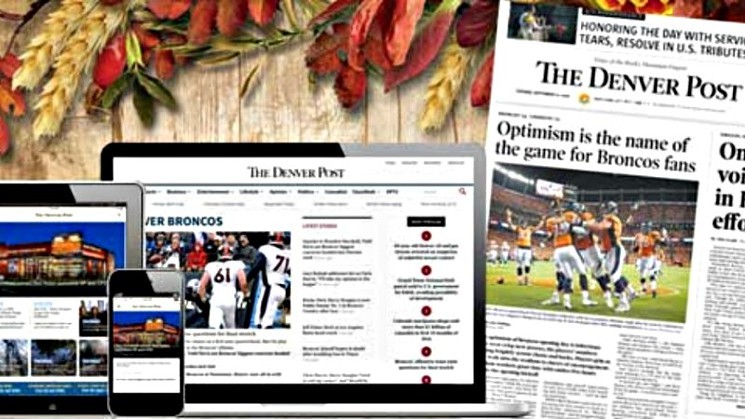 An image sent ast Thanksgiving by the Denver Post as part of a weekend delivery offer.
File photo
"A great state deserves a great newspaper."

An Appeal to Denver Post readers, including Colorado's business, political and civic leadership:

Outside investors who own The Denver Post said last Wednesday they plan to slash a third of The Post's newsroom staff, the latest in a series of staff reductions that now threatens to destroy the state's largest newspaper, a 126-year-old institution in Colorado.

We demand that Denver Post owner Alden Global Capital sell the newspaper to local interests who care about this state and the role that vibrant, independent journalism plays in its civic life.

With the latest announced cuts, The Post's roster of non-management journalists will shrink to 49 from the 200 who staffed the Post newsroom only seven years ago when Alden Global assumed control of the newspaper. This slow strangulation of The Post should be of concern to all Coloradans who value the responsibility that media have to report comprehensively on government, education, business, politics, sports, the arts and other affairs of the community. Alden Global's callous hollowing out of The Post has grievously wounded the newspaper's ability to play that role.

There is a way to save The Post, but time is running out. In Minneapolis, local businessman Glen Taylor bought the Minneapolis Star Tribune four years ago to preserve its role as the dominant media voice in the region. Boston Red Sox owner John Henry acquired the Boston Globe in 2013, claiming that "great institutions," like the Globe, "have stewards, not owners" and "Stewardship carries obligations and responsibilities to citizens first and foremost — not to shareholders. This is especially true for news organizations."

In Salt Lake City, Paul Huntsman, whose family is prominent in Utah's business, political and civic life, bought The Salt Lake Tribune two years ago from The Denver Post's current owners. In a letter to readers, Huntsman said he bought The Tribune "for the betterment of the community and to sustain an independent voice for future generations." He added: "A great state deserves a great newspaper."

In Philadelphia, philanthropist Gerry Lenfest created a unique nonprofit foundation to be the parent of the two Philly newspapers, the Inquirer and Daily News. The purchase of The Washington Post by Amazon's Jeff Bezos has enhanced its position as one of the country's best newspapers.

Colorado needs business and philanthropic leaders to similarly step up and save The Denver Post.
We ask Post readers to contact Alden Global Capital at 885 Third Ave., New York, N.Y. 10022, (212) 888-5500, to convey this message: Sell The Post to owners who care about local journalism and our community.