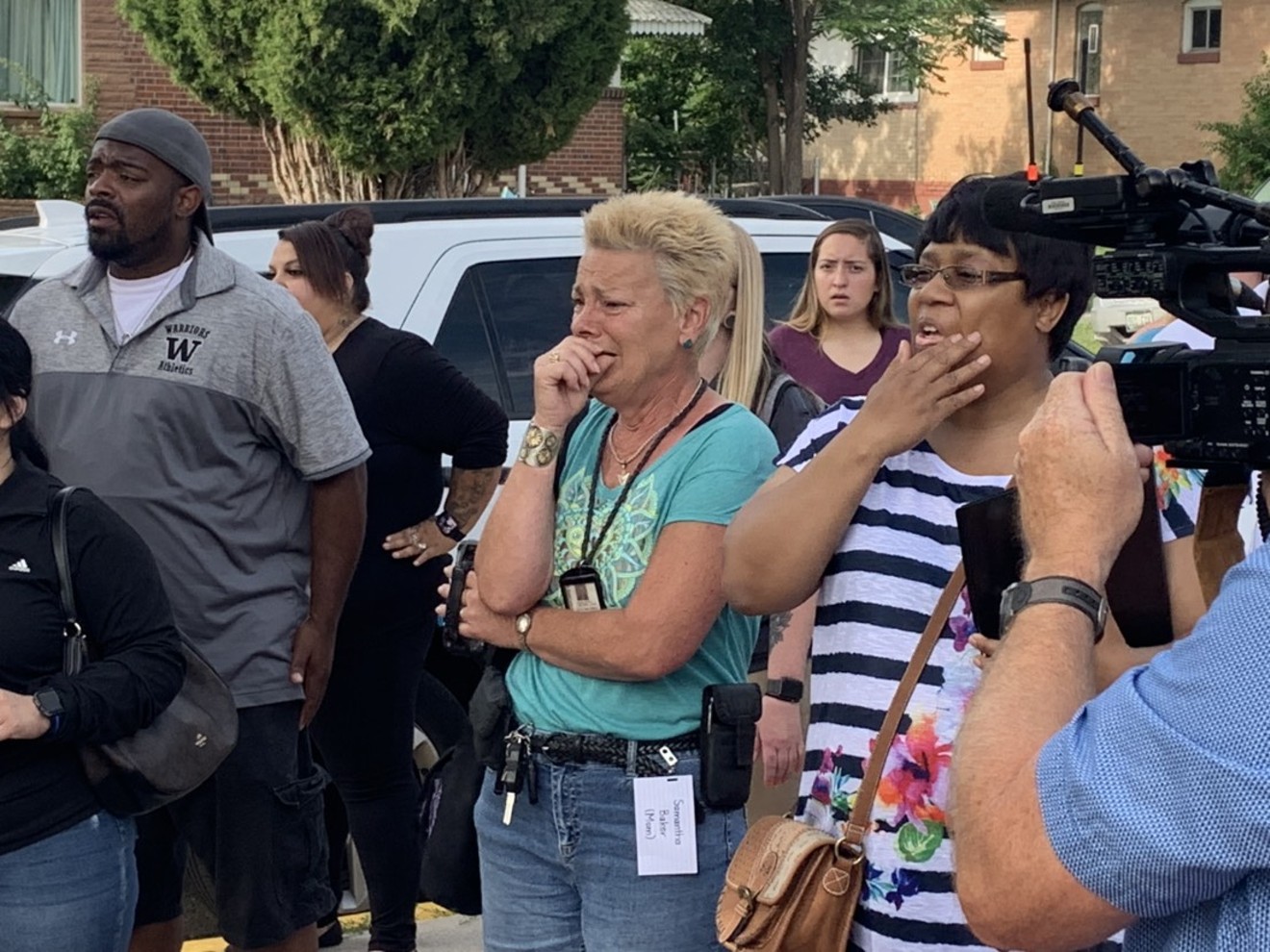 Some of the pretend parents got really into the mock school shooting scenario. Conor McCormick-Cavanagh
At 8:40 a.m. on Tuesday, July 30, around twenty people gathered outside of the entrance of Columbian Elementary School in northwest Denver and began pounding on the door.

“Where’s my son? Why can’t they come out? Please, let me see my son. I need to see my son," one man shouted.

Thankfully for all involved, Jones wasn't talking about a real school shooting situation, but was standing outside of the elementary as part of a drill to train the district's law enforcement officers to deal with an active shooter situation.

The drill followed one that took place last summer. During the summer 2018 drill, a number of children pretended to be wounded by a mock shooter before he was shot and killed. That drill involved the Denver Police Department and school safety officers from Denver, Adams County, Aurora, Boulder and some independent charter schools. It was practice for the type of situation in which law enforcement agencies send in their officers to help stop a school shooting.

This summer's drill picked up where the last one left off, and only involved Denver Public Schools Department of Safety officers. At the start of the drill, the scenario from last year continued, so that officers knew the shooter had been neutralized and that they had to secure the rest of the school and then work to reunify children with their parents.

Even though it was a drill, some struggled to deal with the mock scenario. "I don't like this game," one news cameraman kept repeating as he followed a school safety officer on sweeps of the building. The sweeps led the officers into classrooms, some of which were filled with children. "Department of Safety — anybody in here?," the officer asked each time he entered a room. "If you're hiding, it's okay. You can come out now."

Eventually, all of the rooms were cleared and the pretend parents, mostly staff at the Department of Safety, drove about five minutes from Columbian to North High School and then waited in line to be reunited with their children. Just as in a crisis, the parents were demanding to see their kids as quickly as possible. The whole drill took about two hours.

Although a school shooting hasn't come to fruition in the Denver Public Schools district, there is always the concern. In the twelve months since last July, the district's Department of Safety received over 2,500 calls that resulted in home visits of district children, prompted by students making threats to harm themselves or others or because of other "suspicious circumstances," according to district officials.

And the day before the mock training, the district's Department of Safety was notified of three suicide threats from students; the department found out about about two through the Safe2Tell hotline and the other because a student saved a goodbye letter in a school Google Drive account.

There have been tragedies in surrounding districts, the most recent at STEM School Highlands Ranch in May, where one student was killed and eight were injured. There was also a deadly shooting at Arapahoe High School in 2013 and the school shooting that rocked the nation at Columbine High School in 1999.

In April, a Columbine-obsessed eighteen-year-old traveled from Florida to Denver and purchased a shotgun, setting off a multi-district closure of schools. The young woman, Sol Pais, eventually killed herself before law enforcement could find her.

As the Denver Post pointed out in a May article, metro Denver has by far the most school shootings per capita of any major metropolitan area in the nation, something that worries Jones.

"The only thing that I don't like about my job is that I know, every day I come to work, I have to be ready for this," he says.
KEEP WESTWORD FREE... Since we started Westword, it has been defined as the free, independent voice of Denver, and we'd like to keep it that way. With local media under siege, it's more important than ever for us to rally support behind funding our local journalism. You can help by participating in our "I Support" program, allowing us to keep offering readers access to our incisive coverage of local news, food and culture with no paywalls.
Make a one-time donation today for as little as $1.