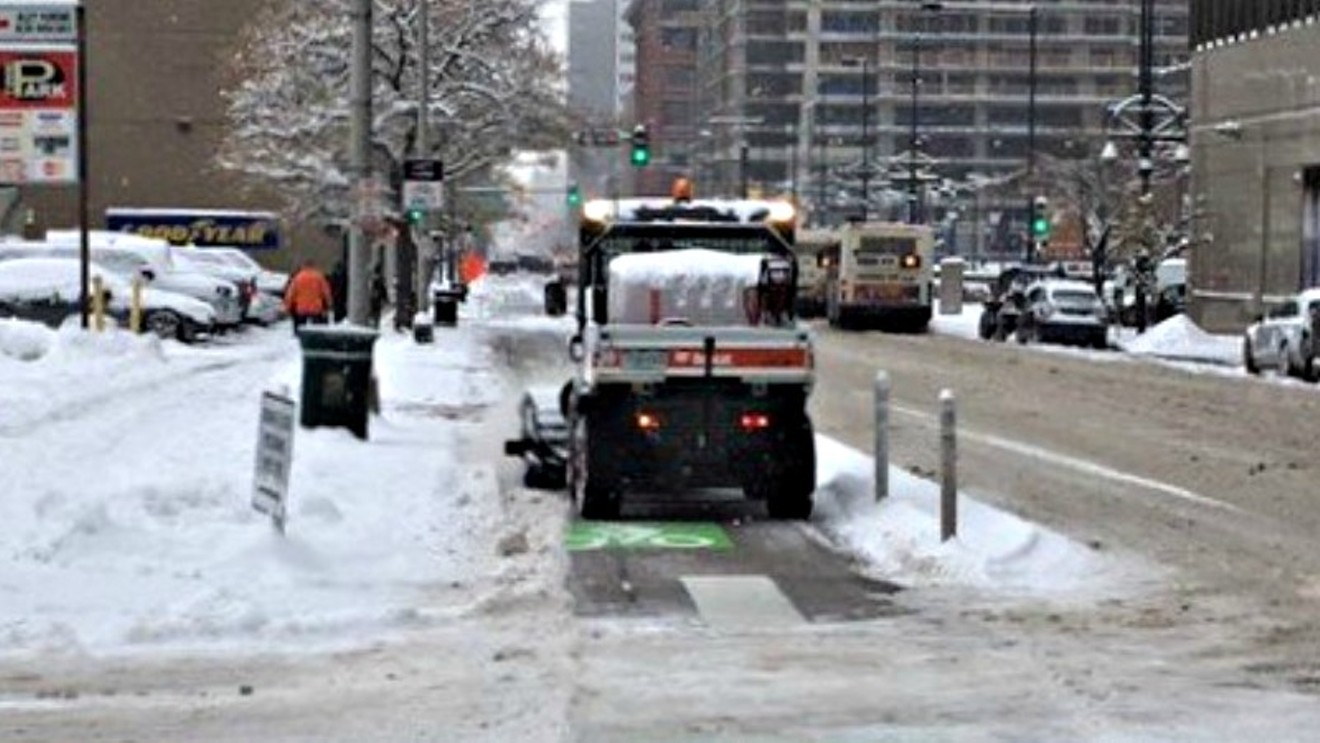 In addition to its main plows and graders, Denver Public Works has specialized equipment designed to clear bike lanes. @DenPublicWorks
On Tuesday, November 26, a week ago today, the full fury of a massive, pre-Thanksgiving storm struck Denver, with the snow that piled up across some parts of the greater metro area exceeding two feet in height. The result was a traffic headache that's not over yet, since some lanes on major thoroughfares remain treacherous in spots and many residential streets still resemble the surface of the ice planet Hoth, which Luke Skywalker only survived because Han Solo shoved his freezing body into a sliced-open tauntaun.

The folks at Denver Public Works, the agency in charge of snow plowing, want locals and visitors to know that they're doing everything they can to improve the situation prior to the next weather pattern, a much more minor system expected to arrive on Thursday, December 5. Yesterday, December 2, for example, DPW dispatched 35 large plows — out of seventy total — in an effort to clear lingering snow from turn lanes and other sections of major routes. Drivers dropped de-icer while making their rounds, too. And also hitting the streets were six of Denver's eight giant road graders, which have long blades designed to create a flat surface.

Nonetheless, plenty of Denver residents are angry about the snow removal efforts thus far and are eager to blame the city for the lousy driving conditions.

And the city has taken note: On the afternoon of December 2, Public Works announced that it would also use de-icer on side streets, despite telling us earlier that day that de-icer isn’t effective for melting ice.

“In a departure from standard operating procedures, given the challenging circumstances of last week’s storm that dropped significant snowfall amounts in a short period of time followed by several days of cold temperatures and overcast skies, Denver Public Works will be starting to drop deicer on its residential streets tonight and continue this work tomorrow in an attempt to accelerate recovery of the side streets,” the department announced in a release. “DPW is utilizing approximately 30 of its large plows, and every side street will be addressed.

“This unprecedented effort is in response to concerns from the city’s residents as to the length of time it is taking the side streets to recover,” it continued. “The effectiveness of the approach will be assessed.”

Nancy Kuhn, DPW's director of communication, and Pat Kennedy, the agency's engineering manager, who spoke to us earlier this year about Denver's pothole program, feel residents' pain. But they say the real culprit for the ongoing issues was Mother Nature, who unleashed a meteorological phenomenon that foiled crews trying desperately to prevent the very type of scenario that developed anyhow.

"The height of the storm hit heavily in the wee hours of Tuesday, and it snowed hard until early afternoon — about an inch an hour," Kennedy says of the measurements on large arterials such as Colfax, Broadway and Colorado Boulevard. "Now, the cycle time on our trucks' routes is five to six hours. So by the time they got back to the point where they started, there were several more inches of snow, and traffic packed it down — and the temperatures were quite cold."

De-icer was applied in advance, Kennedy stresses, "but the de-icer became ineffective because the pavement temperature was so cold. That's why the packed snow stayed there."

One of 36 trucks Denver uses to plow residential streets.
@DenPublicWorks
As for residential streets, Kuhn notes that Denver's approach is far different. "The city never had a residential program before multiple storms we received in late 2006 and 2007. After that, we bought a fleet of four-by-four pickups and started using a criteria where, if twelve inches of snow or more were forecast, we would consider putting out the residential plows. Now, we have 36 pickups and a staff that lets us do that on a more regular basis as needed."

When residential plowing is authorized, it takes place between 3 a.m. and 3 p.m. However, Kuhn notes, "we won't bring those streets to bare pavement. The trucks take a single pass down the center of every side street to provide a path to main roads and prevent deep ice rutting. But if anyone is expecting them to scrape the side streets, that's not going to happen. And the trucks don't carry de-icing material, either."

Why not? "Some people think de-icer is a melting agent," Kuhn acknowledges. "But it's not. What it does is prevent snow and ice from bonding to the street and provides traction. On main streets, cars go over it, and that helps break up the snow and ice so we can clear it. But residential streets don't have the same volume of cars, so laying down de-icer wouldn't have the same effect."

But public outcry was so intense, on the afternoon of December 2 the department reversed course.

“This most recent snowstorm was particularly impactful due to snowfall amounts, snowfall rates and low temperatures, and we’ve heard people’s concerns about the condition of our roadways,” said Eulois Cleckley, executive director of Denver Public Works, in the announcement. “We hope this step of dropping de-icer on the side streets shows our residents that we are listening and will take necessary actions to address their concerns.”

Denver's snow plows "are designed to float an inch or two above the street, so they're not catching manhole covers," Kuhn explains. Road graders don't have this issue, but they're so large that using them on residential streets doesn't make sense, in her view, since doing so risks damage to vehicles that may be parked on either or both sides of the street, among other things.

Once a layer of ice has formed, as is the case in many Denver locations, the options are even more limited, in Kennedy's opinion. "I'm on a committee for the American Public Works Association, and we've done studies on this. If you're looking at melting, you're looking at salt — but you'd have to put down 3,000 pounds of salt per lane mile to melt one inch of snow, which is impractical. It would cause environmental problems and would be so expensive that any benefit you'd get out of it would be minimal. It's not realistic to look at any sort of chemical to melt."

The better alternative, Kennedy feels, is simply to wait for the weather to improve — and prognosticators believe that's about to happen. "I think you'll see a big change over the next day or two. We've been colder than normal since the storm happened — very little sunshine. Now, we're going to get more sunshine, and we'll see a lot of benefit from that."

Monday’s announcement from the department indicated that it was going to reconsider its plowing program.

“Any expansion of the current residential plow program to include de-icing materials on a more regular basis would require a cost analysis, an assessment of environmental impacts to air quality due to increased particulate matter, and resources that may be required to sweep the streets afterwards to reduce particulate matter,” the department wrote.

In the meantime, Kuhn wants people to have a more realistic idea about snow plowing in Denver. "We've got a lot of new people here, and we want to help them understand what the expectations are and what things like the residential plow program can and can't do. It may not make them happy, but I think it helps."

What do you think of Denver's snow-removal efforts? Post a comment or email us at [email protected]
KEEP WESTWORD FREE... Since we started Westword, it has been defined as the free, independent voice of Denver, and we'd like to keep it that way. With local media under siege, it's more important than ever for us to rally support behind funding our local journalism. You can help by participating in our "I Support" program, allowing us to keep offering readers access to our incisive coverage of local news, food and culture with no paywalls.
Make a one-time donation today for as little as $1.