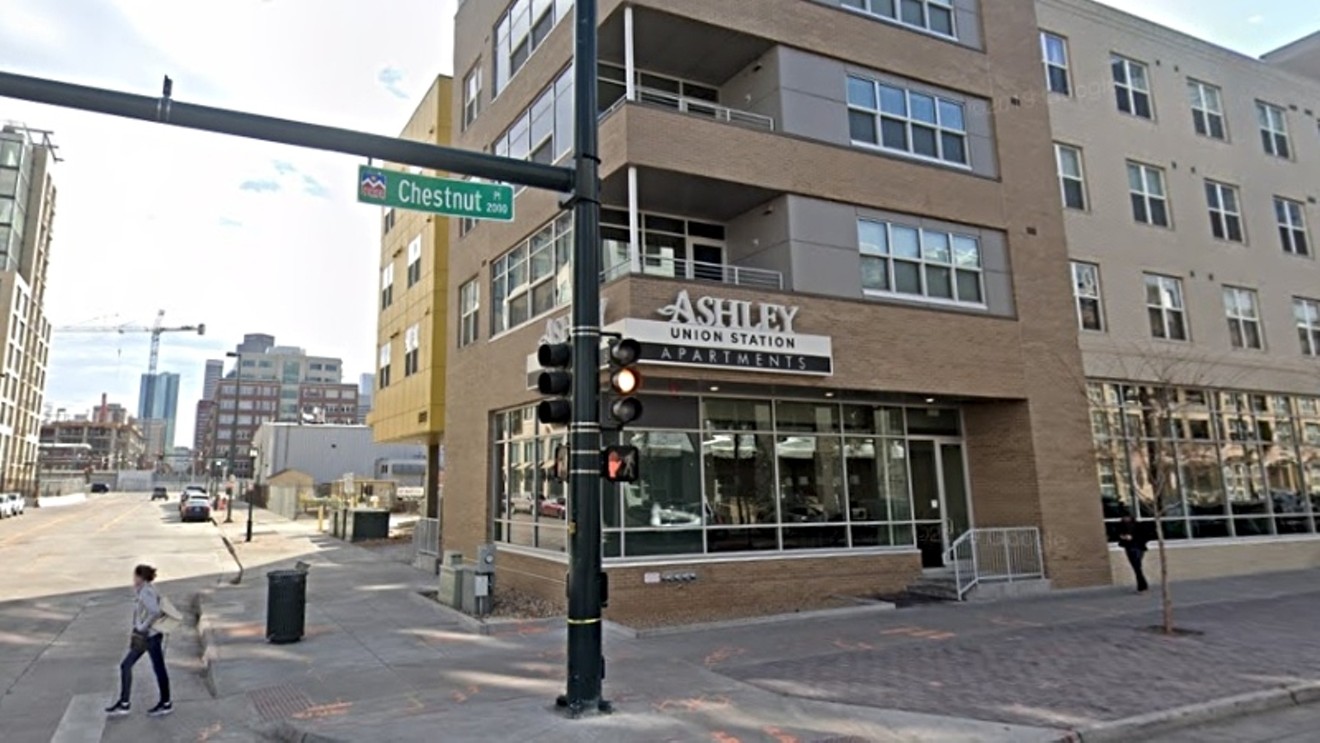 At Ashley Union Station Apartments, at 1850 Chestnut Place, one- and two-bedroom apartments are available for between $1,885 and $3,939. Google Maps
In June, the headline on one of our stories about rising rents asked: "Could Denver Area Rent Go Up 25 Percent in a Year?"

Although the final answer isn't in, if the pace of increase calculated by Apartment List for its October report for Denver continues, 25 percent may be on the low end of the scale. Rent in Denver rose by 2.7 percent during September, and if that gain is matched each month for the next twelve, rent in Denver a year from now could be up by 32.4 percent.

Rent in Denver fell steadily during 2020, thanks in large part to lower demand fueled by the COVID-19 pandemic; many renters in the city either purchased a home or moved to less crowded areas in an effort to enhance safety. But that trend has turned around in 2021. By Apartment List's calculations, rent prices in Denver have risen for eight consecutive months, resulting in a 16.5 percent increase during the year to date. That's actually lower than the state average of 17.2 percent, but higher than the national average of 15.1 percent.

Here's a graphic that shows how the price curve has changed since September 2020: 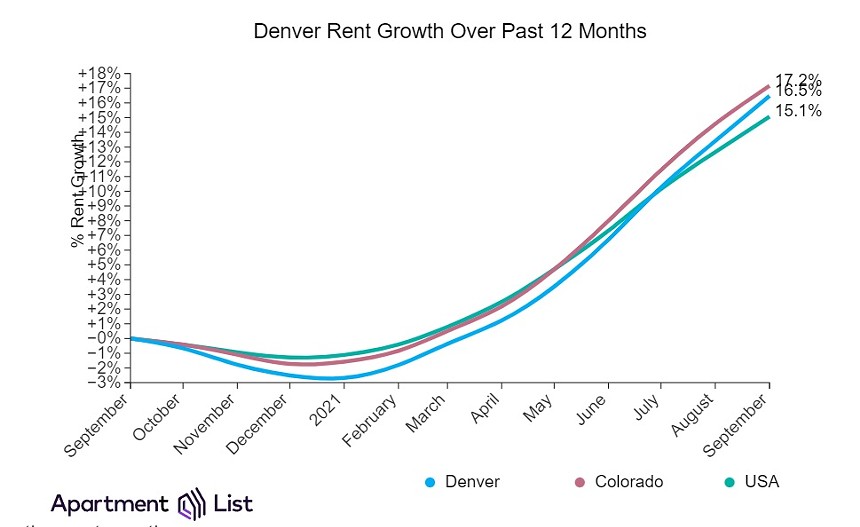 apartmentlist.com
During September 2021, the median rent in Denver proper for a one-bedroom apartment landed at $1,501, and the median two-bedroom cost hit $1,839. But as high as these figures may seem, they're actually lower than in seven of ten metro-area communities tracked by Apartment List. The roster is topped by Lone Tree, where the median price for a two-bedroom apartment is just under $2,500.

Here are the stats: 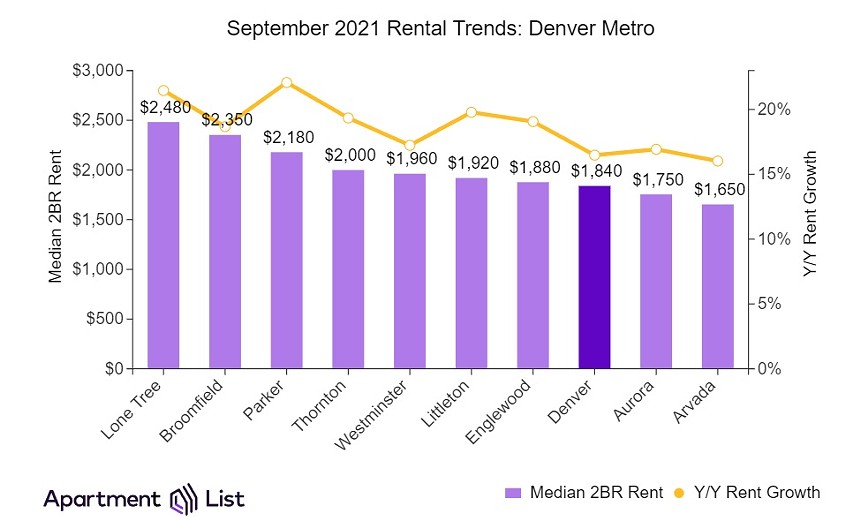 apartmentlist.com
The higher rents in the Denver suburbs are further detailed in the following chart, which shows median one-bedroom and two-bedroom rents along with both month-over-month and year-over-year rent growth. 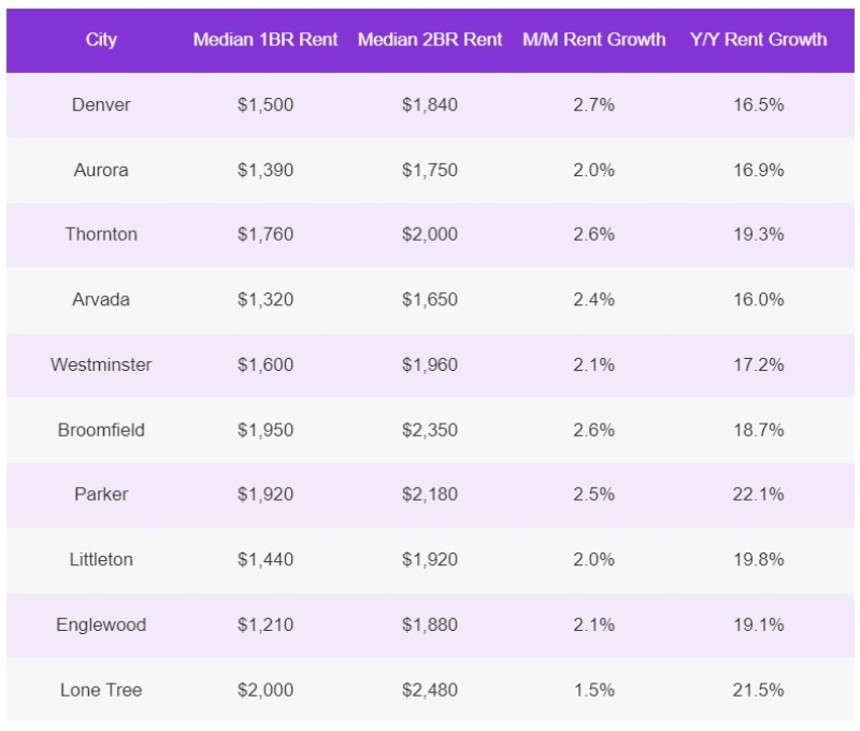 apartmentlist.com
Parker has seen the highest year-over-year rent growth, at 22.1 percent, followed closely by Lone Tree, at 21.5 percent. Only Arvada, at 16 percent, has experienced slower rent growth than Denver over the past twelve months.

But the numbers could change quickly. Denver's monthly bump of 2.7 percent for September is the largest of the ten communities, and up from the 2.4 percent hike back in May.

This phenomenon isn't unique to metro Denver. Fort Collins rents are up 13.9 percent year over year, while Colorado Springs renters are shelling out 18.1 percent more than they were at this time last year. But prices in Denver are definitely higher than in many other similarly sized cities across the country. Note that while Charlotte, North Carolina, has seen a 20.1 percent rent increase over the past year, a two-bedroom apartment there goes for a median price of $1,433 — more than $400 lower than in Denver.

Twelve months from now, though, Denver's current prices may seem like a bargain.
KEEP WESTWORD FREE... Since we started Westword, it has been defined as the free, independent voice of Denver, and we'd like to keep it that way. With local media under siege, it's more important than ever for us to rally support behind funding our local journalism. You can help by participating in our "I Support" program, allowing us to keep offering readers access to our incisive coverage of local news, food and culture with no paywalls.
Make a one-time donation today for as little as $1.