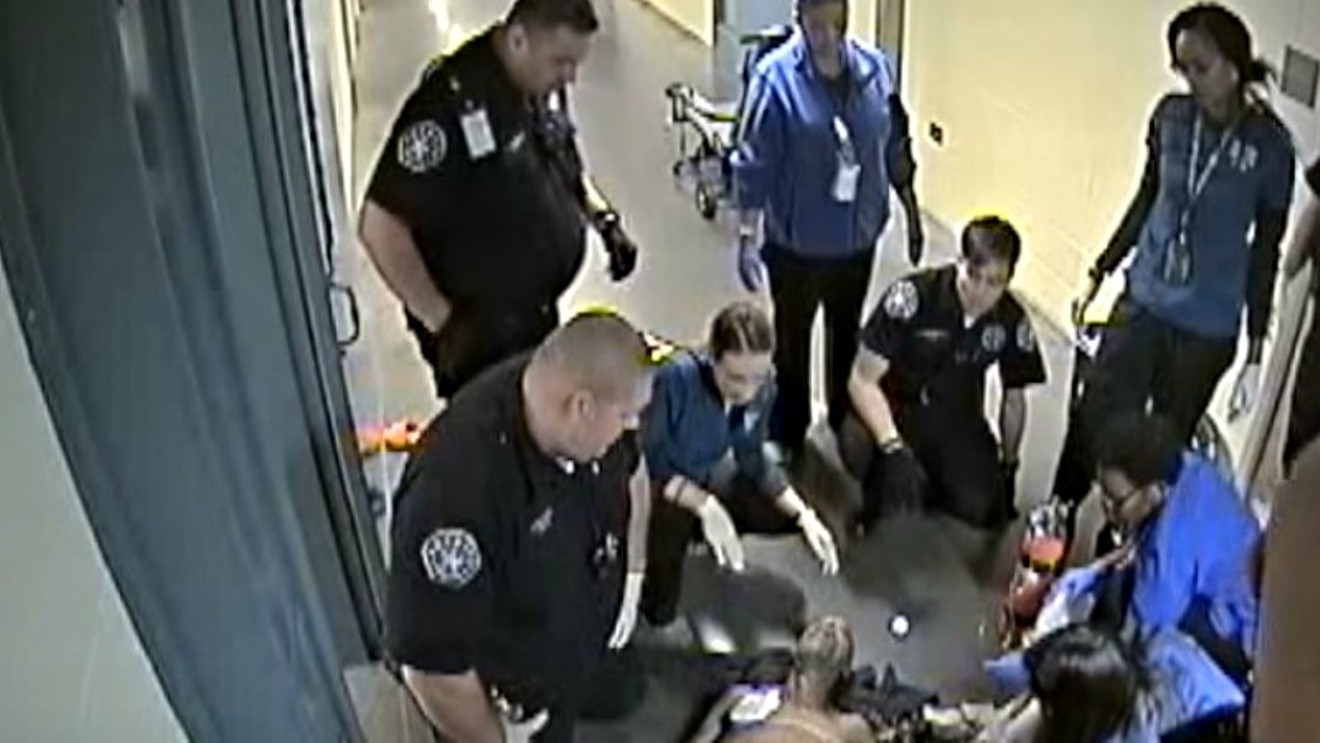 Deputies and emergency personnel looking at the lifeless body of Michael Lee Marshall in November 2015. YouTube file photo
Following several high-profile controversies involving Denver's main jail, including the in-custody deaths of Marvin Booker and Michael Lee Marshall, both of which resulted in multimillion-dollar settlements, the Denver Sheriff Department's Internal Affairs Bureau, the division charged with investigating such incidents, is being placed under civilian control.

The DSD and Denver's Department of Public Safety didn't put out a showy announcement about this significant move, which the city's Office of the Independent Monitor recommended this past March, echoing calls for a change that police-reform advocates have been making for years. Instead, officials simply placed a job listing for a "Director of Internal Affairs" online. (Access and read it below.)

Denver Sheriff Department communications director Daria Serna, corresponding via email, confirms that the Director of Internal Affairs position is civilian in nature. "The Department of Public Safety has a history of supporting the civilianization of positions in its sworn agencies that do not require law enforcement authority," she says. "This applies to the Director of Internal Affairs position as well, which was assessed and ultimately pursued."

Civilians have not always had a smooth road when it comes to inquiries at the jail. In 2014, Brent Miller, a civilian investigator, filed a wrongful-termination lawsuit against the DSD in regard to a case involving inmate Christopher Colbruno, who signed on to a suit of his own two years later.

The Colbruno matter got under way on the evening of May 4, 2015, and continued into the early hours of the following day, as his attorney, David Lane, noted in a previous Westword interview.

On the night in question, Lane continued, "Colbruno was in his cell at the Denver city jail, and he dismantled a box filled with electronics that was in his cell for the purposes of opening the door. He began to eat the metal screws and wires, and when the deputies realized what he was doing, they took him to Denver Health. On his way, he soiled his pants, so they stripped him naked. But instead of going into Denver Health and getting a smock or a blanket, they decided that he was just a mentally ill inmate and paraded him through the entryway and all the way through Denver Health."

Indeed, his lawsuit, which is also linked below, maintains that Colbruno was still naked, except for a pair of orange mittens, when he was affixed to the bed in his hospital room with a belly chain and leg irons. Denver Health staffers soon reported what had happened, and Carmen Kassalty, the person in charge of managing the medical staff that works inside the DSD facility, shared their concerns with interim sheriff Elias Diggins and Captain Paul Ortega, both of whom are named in the complaint. Her e-mail stated, "Denver Health would like the DSD to review the fact the patient was completely naked" when brought to the hospital.

Ortega assigned Miller to look into the matter, the suit states. But after Miller found surveillance footage of Colbruno's naked trek, Ortega allegedly ordered him not to upload it because "they are making it go away; it’s not going to be a case," the lawsuit allows. The document adds: "Ortega explained that 'they' was the Interim Sheriff, Diggins. Ortega then ordered Miller to 'get rid of the video.'"

After fighting against this edict, Miller was fired. In his complaint, he cites the Colbruno dust-up and another similar conflict with superiors as the improper rationale for his dismissal.

Brent Miller filed a wrongful-termination whistleblower lawsuit in 2015.
CBS4 file photo
"The Death of Michael Marshall: An Independent Review," issued by the office of Independent Monitor Nicholas Mitchell (it can be retrieved at the bottom of this post, too), argues that having the sheriff department in charge of investigating itself represents an inherent conflict of interest. And while Deputy Director of Safety Jess Vigil pushed back against plenty of other OIM suggestions, he stated in a letter to Westword that the Denver Sheriff Department was "open to examining and evaluating the benefits of civilianization" of the Internal Affairs Bureau.

That's what happened, notes the DSD's Serna. She credits Troy Riggs, who joined the Department of Public Safety as its executive director in February, with playing a major role in this process.

"Shortly after executive director Riggs was appointed, he and the sheriff [Patrick Firman, who succeeded Diggins in 2015] discussed civilianizing the position of Commander of Internal Affairs," Serna writes. "Following that conversation, the sheriff began discussing the potential move with staff and other stakeholders, including the OIM, and assessing the potential benefits of such a move. Ultimately, the sheriff decided to civilianize the position, which will be tasked with overseeing the bureau and its functions."

Serna adds: "Given Denver’s low unemployment rate, it’s important to evaluate positions that do not require law enforcement authority for potential civilianization. As the sheriff began looking at restructuring the department, he also considered which positions could be civilianized to address staffing needs and other operational considerations."

As for the potential benefits of making this a civilian spot, Serna offers this: "We believe the move will expand the candidate pool and increase the likelihood of securing the best person for the job. It will assist with staffing and other operational considerations, and performance measures for the position will be evaluated on a regularly basis."

She doesn't mention that a civilian Director of Internal Affairs might do a better job of holding deputies and other personnel responsible when and if their actions cause harm or worse to inmates or others. But that's obviously an outcome for which critics are hoping.