Christopher Colbruno Denver Sheriff Department
A new lawsuit claims that the decision by Denver Sheriff Department personnel to march Christopher Colbruno naked into Denver Health violated his basic rights. The suit is the second to be pressed over the matter, after a filing from a civilian investigator who said he was fired by the DSD, which has been accused of failing to report some complaints about the treatment of inmates, in part because he refused to destroy video of the incident.

"We have an endless supply of wrongdoing coming from the Denver Sheriff Department," says David Lane, the attorney who represents Colbruno. "So does this illustrate a problem? It does — along with 10,000 other things."

The aforementioned claims about non-reporting of complaints regarding DSD inmate treatment were highlighted in a 2013 report by Denver's Office of the Independent Monitor. As we pointed out at the time, OIM looked at inmate grievances filed against sheriff's department members over the two and a half years from January 1, 2011, to June 30, 2013. Over that span, 54 "complaints of serious deputy misconduct" were filed — less than 1 percent of the 5,979 total grievances put forward during that period, but still a substantial number. Of those 54 filings, however, only nine of them resulted in Internal Affairs Bureau cases — meaning that the other 45, or approximately 94 percent, didn't get the IAB treatment. 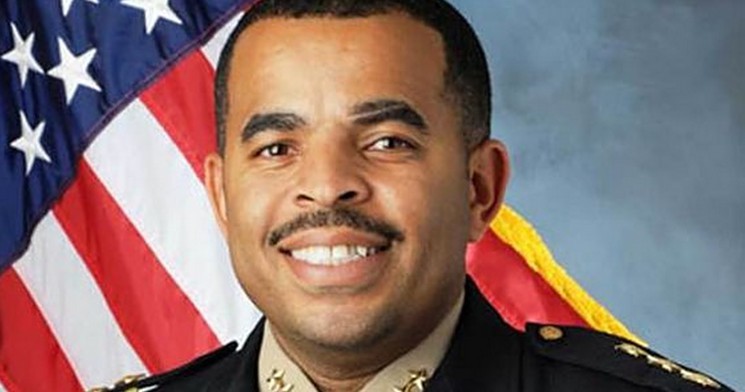 Former interim Denver sheriff Elias Diggins.
File photo
"The report notes that the number of complaints against the Denver Sheriff Department fell from 420 to 170 between 2014 and 2016, a 60 percent decrease," we wrote. "But while the department argues that this is good news, the monitor's office hints that the decline may actually indicate severe under-reporting, especially at a time when the population at both Denver jails overseen by DSD personnel is rising. The monitor cites 'a large number of inmate complaints that may have required formal investigation but were never entered into...the DSD's complaint tracking database' in 2015, as well as the department's lack of cooperation in regard to inquiries on the topic."

Against this backdrop comes the Colbruno suit, which spotlights an incident that began late on May 4, 2015, and continued into the early hours of the following day. Lane describes it like so.

"Christopher Colbruno is severely mentally ill," he says. "He's a prisoner with severe mental illness, and one of the manifestations of his mental illness is that he eats metal. He'd previously eaten a pen, and he was extremely self-destructive when he was in a psychotic episode."

On the night in question, Lane continues, "Colbruno was in his cell at the Denver city jail, and he dismantled a box filled with electronics that was in his cell for the purposes of opening the door. He began to eat the metal screws and wires, and when the deputies realized what he was doing, they took him to Denver Health. On his way, he soiled his pants, so they stripped him naked. But instead of going into Denver Health and getting a smock or a blanket, they decided that he was just a mentally ill inmate and paraded him through the entryway and all the way through Denver Health."

Indeed, the suit maintains that Colbruno was still naked, except for a pair of orange mittens, when he was affixed to the bed in his hospital room with a belly chain and leg irons. Denver Health staffers soon reported what had happened, and Carmen Kassalty, the person in charge of managing the medical staff that works inside the DSD facility, shared their concerns with interim sheriff Elias Diggins and Captain Paul Ortega, both of whom are named in the complaint. Her e-mail states, "Denver Health would like the DSD to review the fact the patient was completely naked" when brought to the hospital.

Brent Miller says he was fired in part because he blew the whistle on a DSD captain.
CBS4 file photo
Ortega assigned Internal Affairs Bureau senior investigator Brent Miller to look into the matter, the suit states. But after Miller found surveillance footage of Colbruno's naked trek, Ortega allegedly ordered him not to upload it because "they are making it go away; it’s not going to be a case," the lawsuit maintains. The document adds: "Ortega explained that 'they' was the Interim Sheriff, Diggins. Ortega then ordered Miller to 'get rid of the video.'"

After fighting against this edict, Miller was fired and quickly filed a wrongful-termination whistleblower lawsuit, citing the Colbruno dust-up and another similar conflict with superiors as the improper rationale for his dismissal. Thus far, no reports have surfaced about any resolution in the case.

As for the latest lawsuit, Lane argues that "it's important because every single individual in our society has the right to be treated with respect and dignity by the government, and that includes what used to be called the least among us — which is severely mentally ill prisoners. So we are seeking to vindicate the basic and essential human dignity of Mr. Colbruno."

Lane points out that he's managed to obtain a copy of the video Miller had been ordered to trash, although "I don't want to send it out, since that would further diminish the humanity of Mr. Colbruno." As for whether Ortega's alleged order that Miller wipe out the images is an example of a systematic effort to cover up complaints about inmate treatment, Lane says this: "It's business as usual in the Denver Sheriff Department."