On April 15, the Denver Clerk and Recorder's Office approved signature-gathering for Denver Deserves Sidewalks, an initiative pushed by Locantore that calls for an annual property fee that would go toward maintaining old and constructing new sidewalks. Denver Deserves Sidewalks will need to submit 9,184 valid signatures to the Clerk and Recorder's Office by early July in order to land the measure on the November ballot.

In addition to Locantore, the initiative's petitioner committee includes Denver Streets Partnership policy director Molly McKinley; Denver Inter-Neighborhood Cooperation Transportation Committee Chair Joel Noble; Jaime Lewis, a transportation advocate with the Colorado Cross-Disability Coalition; and Gosia Kung, the founder of WalkDenver, which later morphed into Denver Streets Partnerships. Noble also serves as chair of the Denver Planning Board; Kung is a member of that board, too.

The initiative would lead to a fundamental shift in how the City of Denver approaches sidewalks. Currently, property owners are responsible for fixing sidewalks in front of their places. "That just turns out to be a really ineffective way to build out a complete functional transportation network," Locantore says.

Instead, the initiative would require the city to maintain sidewalks; it would also accelerate the city's construction of new sidewalks funded by the new property fee.

Back in 2015, what was then WalkDenver launched a campaign asking the city to pay more attention to sidewalks. Denver City Council ended up forming a working group to look at the city's approach to sidewalks.

The city also went from a more reactive approach to fixing old sidewalks — usually only going out to repair a sidewalk after a neighbor called 311 and tattled — to a more "proactive approach," according to Locantore. The city hired an inspector to chart out the whole city and determine which sidewalks were in need of repair. The property owner of land adjacent to the sidewalks would then have to repair the sidewalk with some financial support from the city, or allow the city to do the work and then reimburse Denver.

The Department of Transportation and Infrastructure paused that program in 2020 as a cost-saving measure during the COVID-induced economic downturn. And then, in November 2020, the office of Denver Auditor Tim O'Brien released an audit that was sharply critical of the City of Denver's sidewalk repair program. 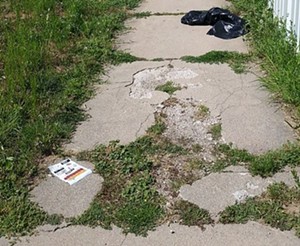 Some Denver sidewalks are in terrible shape.
Courtesy of Denver Streets Partnership
"The city is not ensuring that its sidewalks are accessible to everyone regardless of their mobility level or that sidewalk repairs can be completed in a timely manner. City officials severely underestimated how many sidewalks in Denver needed repair and how many private homeowners would need to make repairs," the auditor's office noted in a summary.

Not only are repairs taking too long, but new sidewalks are being installed at a very slow pace. "It would take about 400 years to build out a complete sidewalk network," Locantore says.

In 2021, Locantore and other sidewalks advocates tried to push the city to work faster. But they concluded "that city council or the mayor’s office is not prepared at this moment in time to take any substantial action on this issue," Locantore says.

And the initiative calls for the buildout of a full Denver sidewalk network within nine years of its passage.  While backers of the measure estimate the fee would generate around $41 million annually, the city could borrow up to $850 million up front through bonds that would be paid back in increments; that would allow the city to stick to the nine-year timeline.

The new sidewalk program would be housed within the Department of Transportation and Infrastructure and overseen by the department's executive director, who would also be tasked with creating a master plan for sidewalks that would be subject to updating every five years. The master plan would also address preserving the original flagstone sidewalks whenever possible.

The initiative's language makes it clear that the intention is not to make the City of Denver liable for not maintaining sidewalks. That's a fear of other municipalities, since Los Angeles once agreed to take on repairing sidewalks, ran out of money and got hit with a huge Americans With Disabilities Act lawsuit that ended in a $1.3 billion settlement. The initiative also states that property owners aren't liable if there's a bad section of sidewalk in front of their land. However, property owners would still need to keep sidewalks shoveled.

The additional annual property fee would depend on the street. For example, the owner of property on a downtown arterial would have to pay $4.30 per linear foot of property frontage, while the owner of a property on a neighborhood street would pay $2.15 per linear foot of property frontage. The price differences are based on what width people prefer for sidewalks on specific street types: The preferred sidewalk width for a downtown street is twelve feet, Locantore says, while most neighborhoods would go for six.

"The most common case in Denver would be a single-family home on a local residential street," explains Locantore. If the home is on a lot that's about 50 feet wide, the new fee would cost that household $107.50 a year.

Properties in neighborhoods that qualify under the City's Neighborhood Equity and Stabilization (NEST) program would get a 20 percent discount on the fee, reducing that $107.50 to $86 a year.

"We wanted to be really thoughtful about equitably distributing the cost of this program and not placing an undue burden on low-income households, and also acknowledging that there are neighborhoods in Denver that have received much less investment in infrastructure overall, including sidewalks," says Locantore.

Even with increases in their property fees, Locantore believes that most people would support the measure. "We feel that there is very widespread support for this initiative," she concludes.
KEEP WESTWORD FREE... Since we started Westword, it has been defined as the free, independent voice of Denver, and we'd like to keep it that way. With local media under siege, it's more important than ever for us to rally support behind funding our local journalism. You can help by participating in our "I Support" program, allowing us to keep offering readers access to our incisive coverage of local news, food and culture with no paywalls.
Make a one-time donation today for as little as $1.