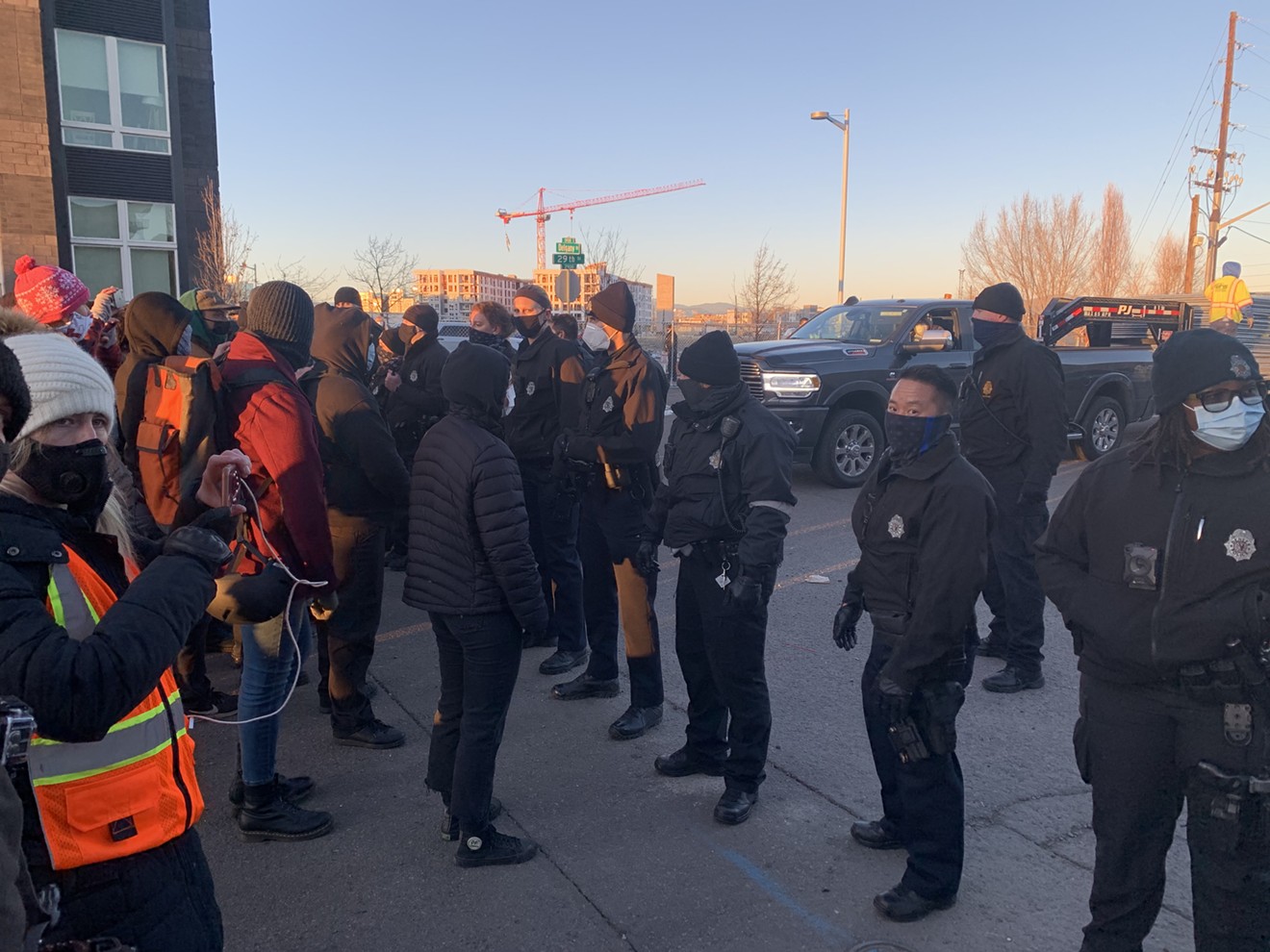 Denver police blocked protesters from entering the immediate vicinity of the encampment at 29th Street and Arkins Court. Conor McCormick-Cavanagh
With protesters yelling nearby, Denver officials began a sweep of a large homeless encampment located in RiNo in the early-morning hours of November 30.

Over an hour before sunrise, Denver Police Department officers and other city workers fenced off the area surrounding the encampment, which wrapped around an empty plot of land in the vicinity of 29th Street and Arkins Court near the South Platte River.

The City of Denver justified the sweep by citing public-health concerns, and said that the area on which the encampment was located will be closed off for an undetermined period of time while it's cleaned up.

"I don’t know exactly how long that will be. It could be inside of a week — or if there was extensive work that had to be done, for example, to address rodents — and I did see some rats this morning — that could take longer," says Danica Lee, director of public health investigations at the Denver Department of Public Health and Environment.

There were other reasons that the sweep was ordered, she adds: the encampment's proximity to the river, a recent homicide that took place there, and complaints from neighbors.

The unofficial encampment might have been the largest in Denver. Lee says that city workers counted 150 tents during a recent survey. Last week, after the city had issued a notice of the cleanup, city workers doing outreach counted 90 to 100 individuals still staying there.

The large homeless encampment wrapped around an empty plot of land in RiNo.
Conor McCormick-Cavanagh
Staff at the Salvation Army's Crossroads homeless shelter, which is located just next to the encampment, estimate that between 150 and 200 people had been staying there; residents of the encampment, on the other hand, say that there had been up to 300 people living there.

In the early months of the pandemic, the City of Denver had largely avoided displacing homeless encampments. That policy fell in line with guidelines from the Centers for Disease Control and Prevention, which instructed municipalities not to sweep encampments unless adequate housing was available, so as to not further spread COVID-19.

However, over the summer, the city began again sweeping encampments, including large ones that had sprung up in the Capitol Hill neighborhood. Denver is currently facing a lawsuit in the U.S. District Court of Colorado over the sweeps it's initiated during the pandemic.

Lee views the CDC's guidelines as flexible. "In that CDC guidance, they’re not talking about, 'Oh, unless conditions deteriorate to this level or unless it’s impacting a waterway.' I mean, it’s guidance that is important, but it does have to be taken into the consideration of the broader context of what you’re dealing with, and it’s not the only factor," she explains.

Hours before the city started fencing off the area, around a hundred protesters gathered by the encampment in an attempt to block the sweep and to help residents staying there transport their belongings. At various points throughout the morning, protesters clashed with police, who were armed with paintball guns loaded with pepper balls, as well as batons and cans of pepper spray. When protesters tried to knock down the fencing, which was set up to keep them out of the vicinity of the encampment, police officers shot the protesters with pepper balls and sprayed them with pepper spray.

Police made a total of four arrests, for refusing to follow a dispersal order. Two of those arrested were individuals who'd been staying at the encampment, and had spoken out at a press conference hosted by Denver Homeless Out Loud two days before the sweep.

A few residents were still gathering their belongings and preparing to depart as the fencing was finished. Some of the tents remained standing; Lee and other city officials suggest that since the encampment was established over a year ago, many of those tents might belong to former former residents who'd abandoned them earlier.

The city does offer storage for belongings, including those that appear left behind. But the simple presence of a needle justifies the disposal of a tent, according to city guidelines.

Homeless service providers have criticized the city's reliance on sweeps of encampments, especially during a pandemic, with many referring to it as a "whack-a-mole" strategy that simply displaces people who will wind up pitching their tents elsewhere in Denver.

In fact, at a November 28 press conference outside of the encampment, a resident named Thomas Bevington said, "This is where the cops told us we would be okay, and apparently we're not going to be okay." Asked to comment on this, Jay Casillas, a DPD spokesperson, responded, "I cannot confirm what individual officers said."

Prior to the sweep, Sarah Jewell, another resident of the encampment, said she had no plan for where to go next. "I'm scared. I don't say it out loud, but I'm worried," Jewell said. "We're literally being pushed to nothing. We already have nothing."

This sweep comes a day before service providers plan to start setting up two safe-camping sites in church parking lots in the Capitol Hill neighborhood. They will have a combined capacity of seventy.

As for the plot of empty land that had been surrounded by the encampment? It will be the subject of a rezoning hearing in mid-December: Developers plan to build a mixed-use project on the property.

This story has been updated with addtional information about the arrests.
KEEP WESTWORD FREE... Since we started Westword, it has been defined as the free, independent voice of Denver, and we'd like to keep it that way. With local media under siege, it's more important than ever for us to rally support behind funding our local journalism. You can help by participating in our "I Support" program, allowing us to keep offering readers access to our incisive coverage of local news, food and culture with no paywalls.
Make a one-time donation today for as little as $1.