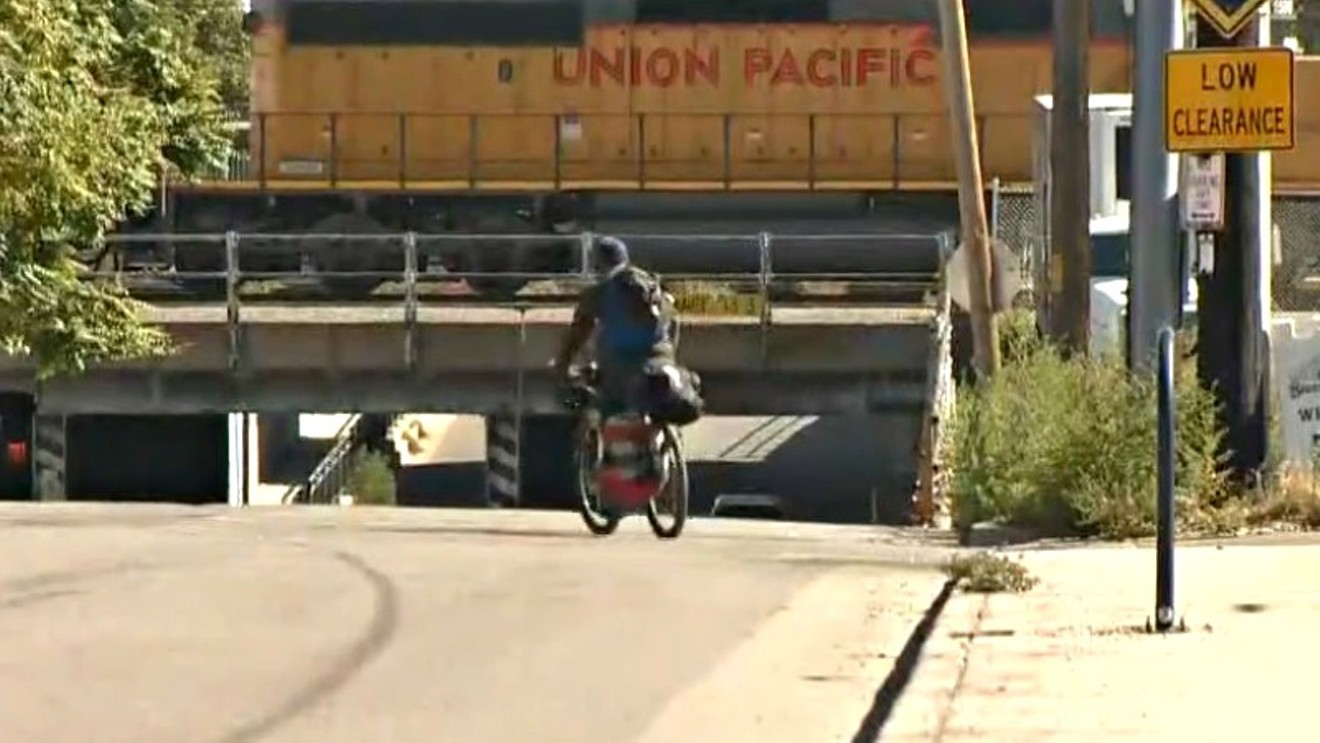 Near 38th and Brighton, where cyclist Cameron Holub was killed on October 7. 9News
The dream at the heart of Denver's Vision Zero plan — to eliminate traffic casualties in the city by 2030 — is a very long way from realization. The number of such fatalities has been ratcheting upward over the course of the decade, from just over thirty in 2011 to 61 in 2018, and the trend won't be reversed this year. The death of 31-year-old Cameron Holub, who was struck and killed by a car late on October 7 near the intersection of Brighton and 38th after rolling through a red light, brings 2019's total of lives lost under such circumstances to 62.

Piep van Heuven, policy director at Bicycle Colorado and chair of the Denver Streets Partnership, a coalition of nonprofit advocacy groups working together to increase safety on the city's roads, has a slew of ideas about how to improve these sorry statistics. She sees the fatality figures as "another indicator that we need to pick up the pace on our safety-design fixes and building a complete bike network. One of the reasons more people don't get out and ride is that our network just isn't connected, so we need to fund and build a safe bicycle and pedestrian network at a faster pace."

But the idea atop her wish list is reducing the speed limit on unmarked residential streets in Denver from its current default of 25 miles per hour to 20 mph — an effort promoted by the slogan "20 Is Plenty."

Among those who find merit in this concept is Denver City Council member Paul Kashmann. But like van Heuven, he doesn't see reduced residential speed limits as the only way to address the human toll on Denver streets. "We know that when people drive more slowly, it reduces injuries and deaths," Kashmann allows. "The issue is, how do we get people to drive more slowly?"

To find out, Kashmann spearheaded a $350,000 budget request that would fund "an additional traffic engineer to gather information about what the conditions are on the ground, how many miles do we have on neighborhood streets that are rated at 25 miles per hour, how many signs do we need to buy and replace," as well as to "engage a consultant team to examine best practices around the country and look at how something might be rolled out in an effective way."

Six of Kashmann's colleagues have signed on to the idea, which is now being considered by the office of Mayor Michael Hancock. When asked about Hancock's position on the issue, deputy communications director Mike Strott says, "Our budget team is continuing to go through city council's requests for additions to the 2020 budget and will have the mayor's response to those requests in the next couple of days."

In the meantime, however, Strott points out that speed limits are already being lowered on several major Denver corridors: Cherry Creek Drive South from University to Colorado boulevards (35 to 30); FIrstst Avenue/Steele Street/Cherry Creek Drive North and Alameda Avenue from University to Colorado (35 to 30); Peoria Street from 47th to 39th avenues (40 to 35); 56th Avenue from Quebec Street to Tower Road (45 to 40); and Evans Avenue from Federal Boulevard to Huron Street (35 to 30).

Such switches are more substantial than they might seem at first blush, van Heuven notes. "Even five miles per hour can make a big difference if there's a crash between a car and a person. It can make the difference between a person being seriously injured or it being a lot worse."

This Bicycle Colorado graphic highlights the different outcomes that can result from accidents given variations in speed.
Bicycle Colorado
Bicycle Colorado has been pushing the "20 Is Plenty" approach since April, van Heuven reveals, "and there are other city examples where they've dropped the limits in select areas as a pilot program or more broadly. It would be great to see Denver step up on this important safety policy."

Kashmann is leaning in that direction, too. But he believes speed-limit reductions work best in concert with other safety upgrades. "We need to engineer our streets to lead to slower speeds. If we want people to drive fast, we have wide lanes and straight-away travel with no obstructions — but if we want them to slow down, we need to narrow the lanes and make it a little more challenging, whether that's by varying the path of travel or things like speed humps and the like."

At the same time, he continues, "the expected speed plays an important role. Almost everybody I talk to grew up with the thought that if you drive five miles per hour over the speed limit, you're good to go; you're not going to get a ticket, and everything will be fine. So we need to correct that behavior. We're never going to be able to correct the behavior of people who don't care, but we need to appeal to people who do. When I see one of those feedback signs that says you're doing 35 and the speed limit is 30, I appreciate it. They work on me. But simply lowering the speed limit may have minimal effect if we don't follow it up with the proper engineering. Otherwise, we may not find the reduction in injuries and deaths that we would hope."

For van Heuven, an example of this phenomenon is the 38th and Brighton intersection where Holub died. "There are some good design elements, but it's also a scary place to ride a bike when you're trying to cross," she says. "Brighton now has a terrific new cycle track going north-south, and the markings for the bike lane run through most of the intersections with green paint, which is great. But there are no bike facilities for east-west crossings. That's exacerbated by the fact that there are very few places to safely cross the railroad tracks, and if you're going west on 38th, you have to ride under the bridge with the railroad tracks. You're either doing that on the street, which is for accomplished riders, or on a sort of protected sidewalk next to it." She also suspects that lighting and visibility were a factor in Holub's accident, which took place just before 10:30 p.m.

Among van Heuven's other suggestions for improving safety in Denver would be to forbid right turns at red lights — a potentially tough sell given that the maneuver has been allowed for decades and is beloved by most drivers. (In 1977's Annie Hall, Alvy Singer, played by Woody Allen, gives a backhanded compliment to Los Angeles, which he despises, when he says, "I don't want to move to a city where the only cultural advantage is being able to make a right turn on a red light.") But she says disallowing such moves would be a boon, "especially for people who bike and walk. Frequently, a driver will pull up to an intersection where they're intending to turn right, and they look left before rolling through, not realizing you're on the right. So they're not going to see you — and intersections are where the majority of accidents happen."

Kashmann isn't currently pressing any proposals related to turning right on red, but neither does he dismiss the idea out of hand. "In recent months, with all the scooters downtown around the City and County Building, I've trained myself to always look in my side mirror to make sure there's nobody scooting up next to me before I turn right. So that's something else that's worthy of consideration."

He adds: "When I came to Denver in 1971, there were around 500,000 people here, and now there are around 715,000 people. It's a different environment, so we need to keep our wits about us and slow down — and be as concerned about the other person as we are about ourselves."
KEEP WESTWORD FREE... Since we started Westword, it has been defined as the free, independent voice of Denver, and we'd like to keep it that way. With local media under siege, it's more important than ever for us to rally support behind funding our local journalism. You can help by participating in our "I Support" program, allowing us to keep offering readers access to our incisive coverage of local news, food and culture with no paywalls.
Make a one-time donation today for as little as $1.