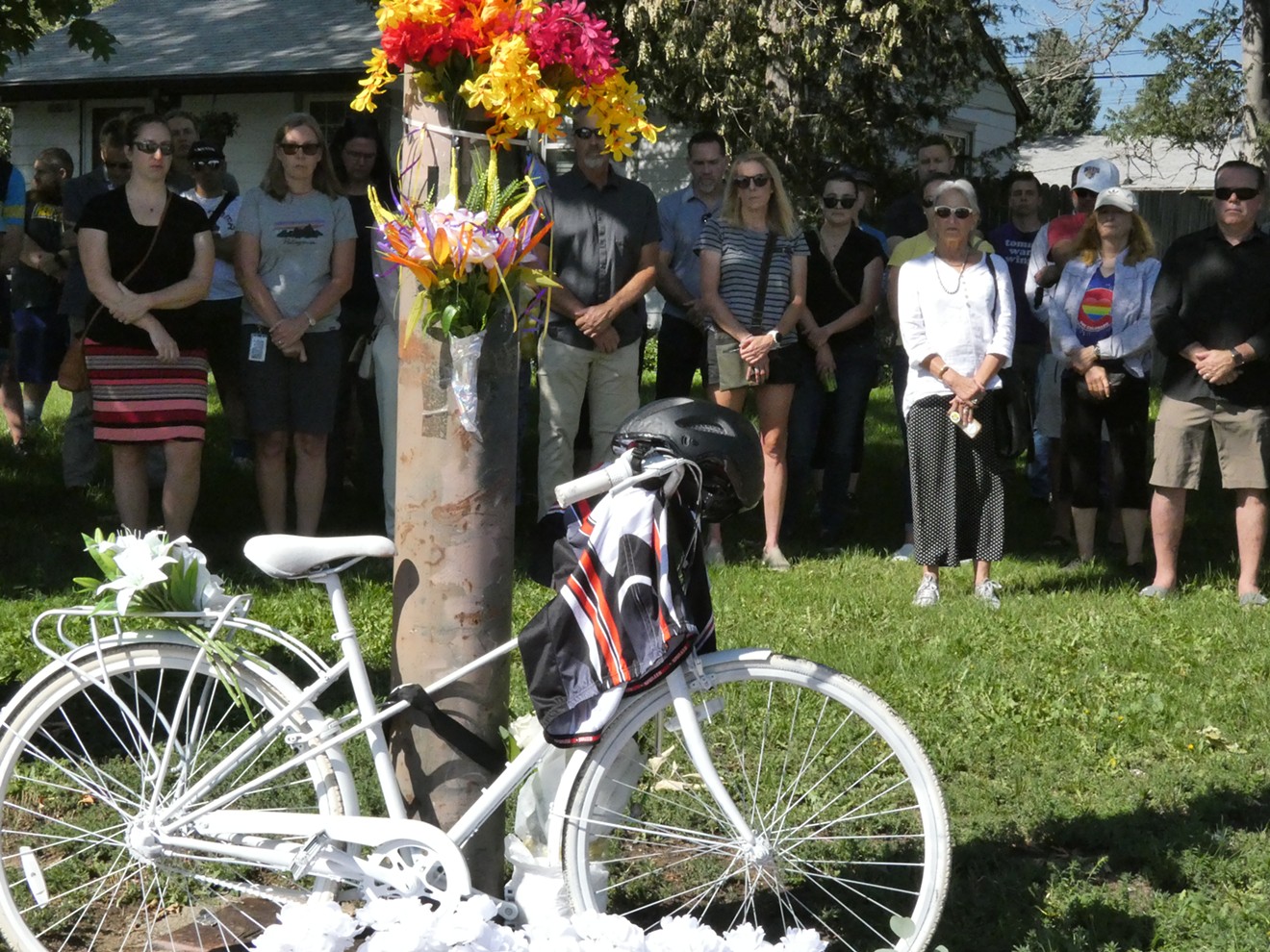 This ghost bike remembers Steve Perkins. Katrina Leibee
On August 10, Steve Perkins was riding his bike at the intersection of Syracuse Street and East 13th Avenue when he was hit and killed by a car that zoomed off.

"Steve was a really great guy," says his twin, Dan Perkins. "I know everybody says that, and it sounds very cliché, but he really was a give-you-the-shirt-off-his-back kind of guy. He never turned down somebody who was in true need."

Now the Perkins family and Dan's friends and other bikers are mourning his death — and fighting for bicycle safety in Colorado. On August 24, they gathered at the intersection where Steve was killed in that hit-and-run for a ghost bike ceremony. A white bike, along with flowers and other remembrances from friends and family, will remain there as a reminder of a biker whose life was lost in a traffic accident.

"The ceremony serves two purposes. One, to remember Steve Perkins, who was hit and killed by a driver who left the scene," says Pete Piccolo, executive director of Bicycle Colorado, an advocacy group. "It’s also to shine a light on what really is a public health epidemic, which is traffic violence." 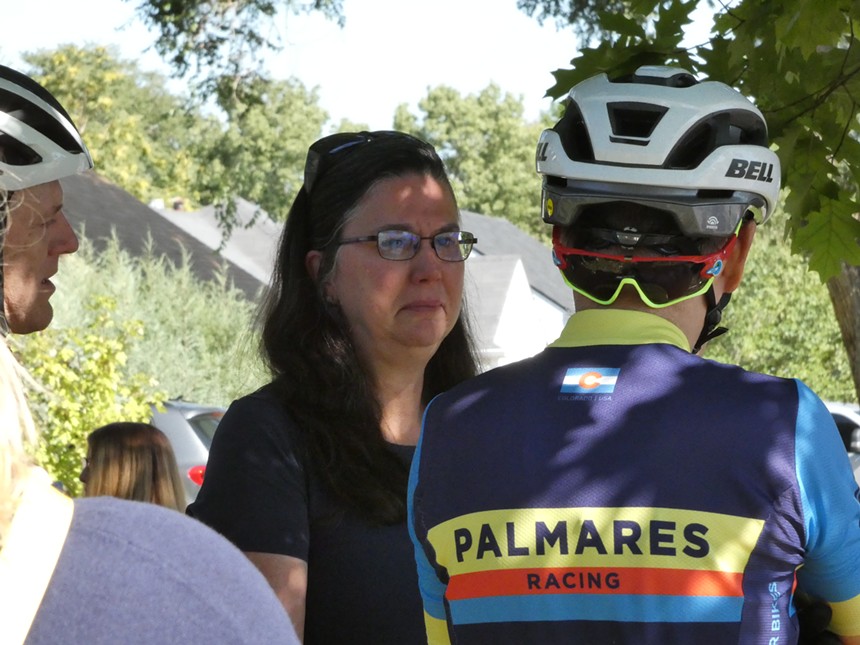 And mourners have been at this corner too often. In April, a car ran a red light at 14th and Syracuse, landing the driver in the hospital; a passenger in the other car died. At that time, Denver's data on traffic accidents reported 72 crashes at the intersections of Syracuse and 13th and 14th avenues since 2013.

“It’s sad to be here with people who have been to so many of these things," says Jace Davis, lead educator and outreach associate for Bicycle Colorado.

Dan Perkins says that he would like to see more signage in the area reminding people that they are coming up on a stoplight. "I think this neighborhood needs some help with this intersection at 14th and Syracuse," Perkins says. "I wasn’t surprised to learn that there had been other recent incidents at these intersections."

An automatic vehicle identification system, such as a photo speed van with an enforcement agent inside, isn't an option at this spot. Under Colorado law, red-light cameras may be used anywhere throughout the state, but speed cameras are only allowed in school zones and residential neighborhoods; within maintenance, construction and repair zones; and along streets that border a municipal park. Speed cameras are not allowed on arterial streets such as Syracuse.

Bicycle Colorado is currently working on legislation that would allow municipalities to determine for themselves where they need speed cameras and change the rules so that a law enforcement officer or government official does not have to be present at the time of a violation, which is common in other states.

Denver already plans to take action. "Following a review of the crash circumstances and the site,"
says Nancy Kuhn, public information officer for the Denver Department of Transportation and Infrastructure, "DOTI is going to upgrade the side-mounted traffic signals at the 13th and Syracuse intersection so the signal heads on the side will be larger (going from 8-inch signal heads to 12-inch signal heads). The team is also going to add a second overhead signal on the westbound approach to the intersection so there will be a traffic signal over each lane of vehicle travel."

The goal is to make the traffic signals more visible, Kuhn says. In the meantime, the ghost bike will be standing watch at the deadly intersection.
KEEP WESTWORD FREE... Since we started Westword, it has been defined as the free, independent voice of Denver, and we'd like to keep it that way. With local media under siege, it's more important than ever for us to rally support behind funding our local journalism. You can help by participating in our "I Support" program, allowing us to keep offering readers access to our incisive coverage of local news, food and culture with no paywalls.
Make a one-time donation today for as little as $1.
Katrina Leibee, a recent graduate of Colorado State University, is an editorial fellow at Westword, covering politics, business and culture.
Contact: Katrina Leibee
Follow:
Twitter: @katrinaleibee