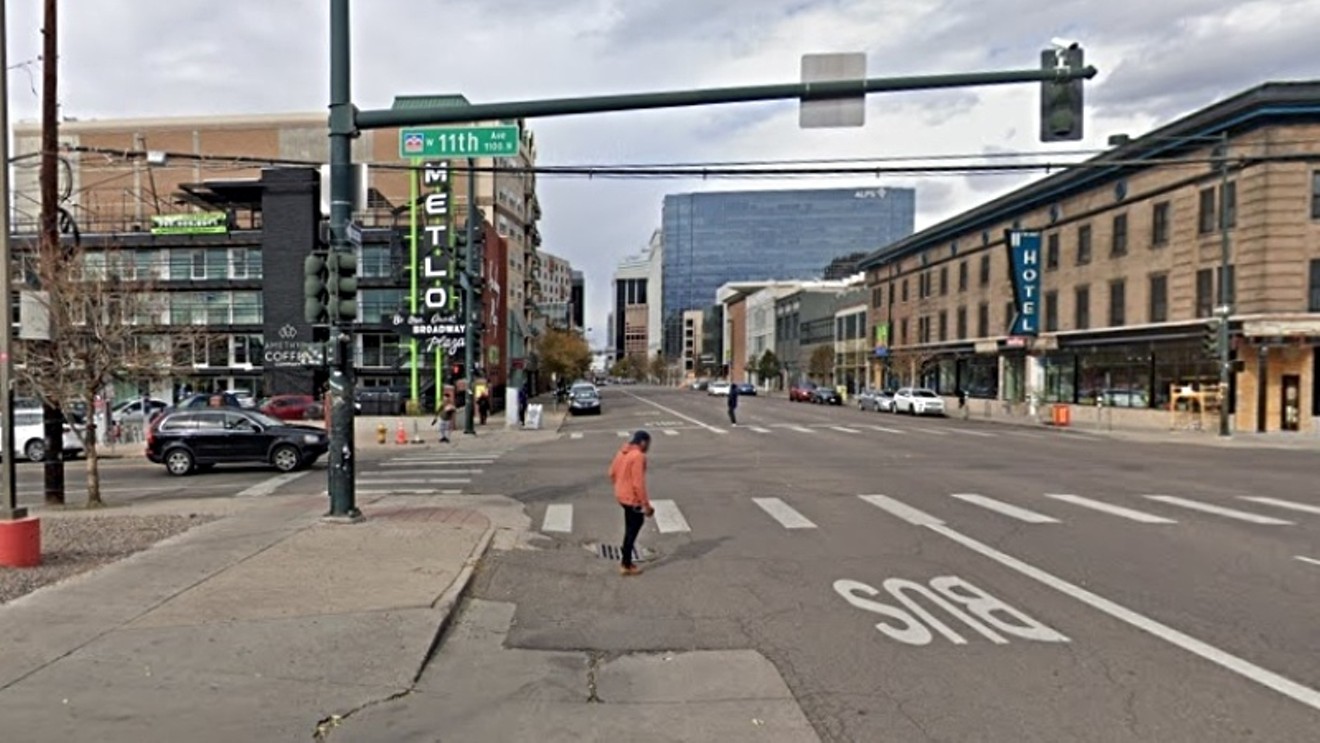 A shooting took place near the intersection of West 11th Avenue and North Broadway Street early on August 7. Google Maps
Metro Denver tallied numerous violent episodes over the past weekend, including multiple stabbings and shootings, one of which involved a law enforcement officer and resulted in the killing of a suspect.

At 7:52 a.m. on August, 5, the Denver Police Department tweeted a bulletin about a death investigation on the 3600 block of High Street, in the Cole neighborhood. A 3:12 p.m. update reported that the fatality was considered a homicide, with the victim an adult female.

Shortly thereafter, at 4:40 p.m. on August 5, the Adams County Sheriff's Office located a man named in an active attempted-homicide warrant at 301 Malley Drive in Northglenn; ACSO personnel are said to have been assisting Denver police at the time. Upon contacting the suspect, a news release notes that "an officer-involved shooting occurred." In the process, the suspect died and a deputy sustained minor injuries. Additional details are scant, beyond confirmation that the episode is under investigation by the 17th Judicial District Incident Response team.

The DPD issued another bulletin at 2:38 a.m. August 7, this time in regard to a shooting near the intersection of West 11th Avenue and Broadway, in the Golden Triangle.  An adult male was transported to an area hospital with serious injuries.

That afternoon, at 1:32 p.m. August 7, DPD personnel were called to the scene of a stabbing on the 1500 block of Hooker Street, in the West Colfax neighborhood. An adult male was hospitalized with unspecified wounds.

Finally, at 8:03 p.m. August 7, Denver Police distributed an alert about a stabbing in the vicinity of West Jewell Avenue and South Sheridan Boulevard, along the border of the Harvey Park neighborhood. Once again, the victim was an adult male hurt seriously enough to require hospitalization. But this time, a suspect was taken into custody at the scene — who also required treatment at a hospital.

Anyone with information about these incidents can contact Metro Denver Crime Stoppers at 720-913-STOP (7867).
KEEP WESTWORD FREE... Since we started Westword, it has been defined as the free, independent voice of Denver, and we'd like to keep it that way. With local media under siege, it's more important than ever for us to rally support behind funding our local journalism. You can help by participating in our "I Support" program, allowing us to keep offering readers access to our incisive coverage of local news, food and culture with no paywalls.
Make a one-time donation today for as little as $1.