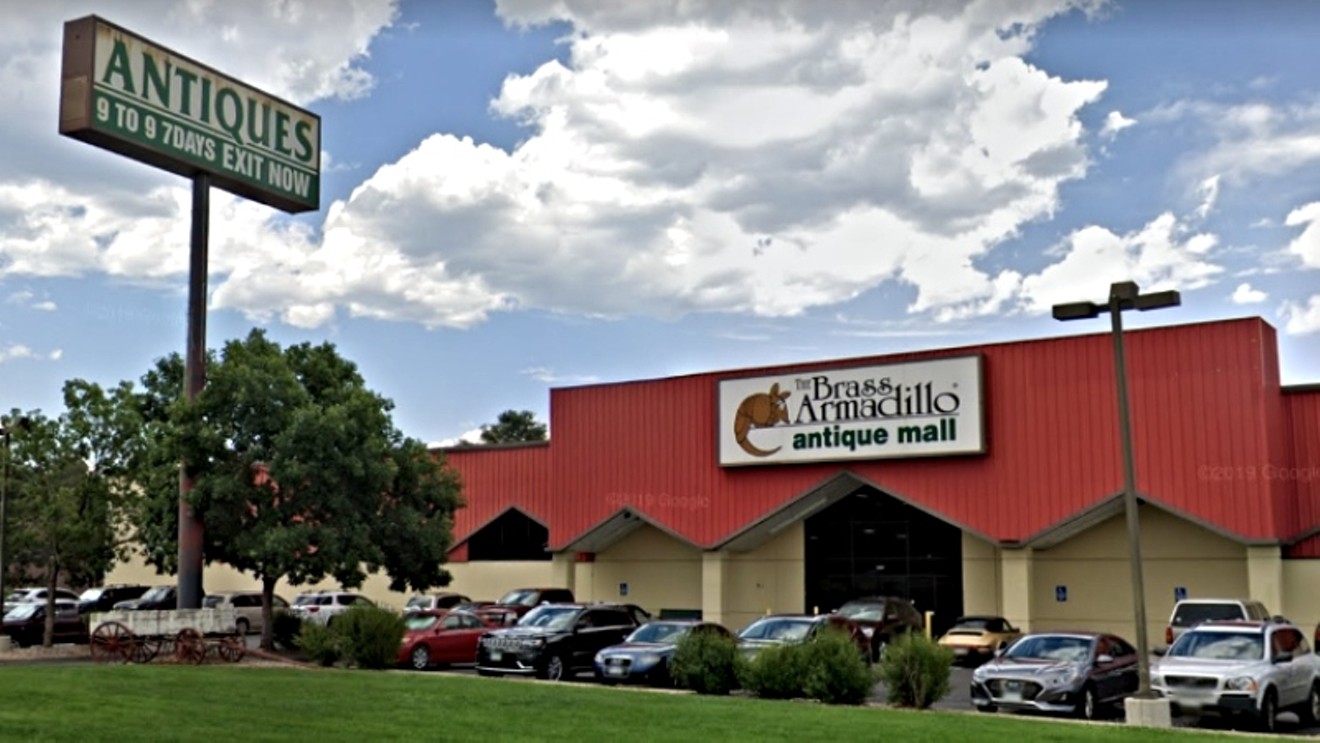 Brass Armadillo is located at 11301 West Interstate 70 Frontage Road North in Wheat Ridge. Google Maps
Colorado's COVID-19 statistics are ranging from the worst in months to the worst ever. Yet in recent weeks, mask-wearing has slacked at stores such as King Soopers, which had two branches pop up on a recent outbreaks report, and defiance of facial-covering rules appears to be on the rise in the metro area.

That was certainly the case during my visit late Sunday, October 18, to Brass Armadillo, a giant antiques mall at 11301 West Interstate 70 Frontage Road North in Wheat Ridge, where I heard the single lamest excuse for not wearing a mask during the pandemic to date.

The claim would have been funny if the situation involved wasn't so deadly serious. But truth be told, it was still kind of funny.

Two days earlier, Jefferson County Public Health, whose jurisdiction includes Wheat Ridge, had issued an alert revealing that Jeffco was in danger of losing its Safer at Home Level 2 designation under the dial framework developed by the Colorado Department of Public Health and Environment because of problematic COVID-19 data. Over the previous two-week period, spanning October 2 to October 15, the county had recorded 1,013 cases of the novel coronavirus, or 174 per 100,000 people.

Those are serious consequences — but apparently not serious enough to persuade a couple at Brass Armadillo to cover up. The mammoth outlet has a sign posted on its front door emphasizing that facial coverings are required to enter per state law, and a masked greeter was posted at a table just inside the entry, presumably ensuring compliance. But this sixty-something couple was unmasked anyhow, as the two casually perused booths and displays, passing closely by other patrons who were properly covered up.

After I spotted the pair, I turned a corner and saw an elderly Brass Armadillo employee. I casually told her that there were two people without masks the next aisle over, and moved on. A few minutes later, I encountered the staffer again, and she told me wearily, "They say they have a health exemption from the President."

My first instinct was to laugh. The second was to ask if this exemption was on paper, because it seemed like it would make a helluva souvenir.

Of course, it's at least theoretically possible that both the man and the woman had identical respiratory issues that prevented them from safely masking up. But there was on outward indication that anything was wrong. They both appeared to be healthy and vibrant, with no oxygen tank or anything of the like visible, and while neither sported any MAGA gear, the man was clad in plaid, which has become almost as reliable an indicator of political affiliation among dudes of a certain age as a Blue Lives Matter flag.

Oh, yeah: As I was making my purchase, I saw not one, not two, not three, but four more customers without masks: a trio of women who looked to be in their late twenties and a woman around seventy talking to the greeter with her visage on proud display. Since there were about thirty people total in the store, that translated to approximately 20 percent of its customers presumably deciding that this particular legal mandate wasn't for them.

Perhaps that first twosome will have a different opinion if Brass Armadillo has to start limiting capacity to 25 percent, but probably not. After all, they've got a prescription from Dr. President.
KEEP WESTWORD FREE... Since we started Westword, it has been defined as the free, independent voice of Denver, and we'd like to keep it that way. With local media under siege, it's more important than ever for us to rally support behind funding our local journalism. You can help by participating in our "I Support" program, allowing us to keep offering readers access to our incisive coverage of local news, food and culture with no paywalls.
Make a one-time donation today for as little as $1.