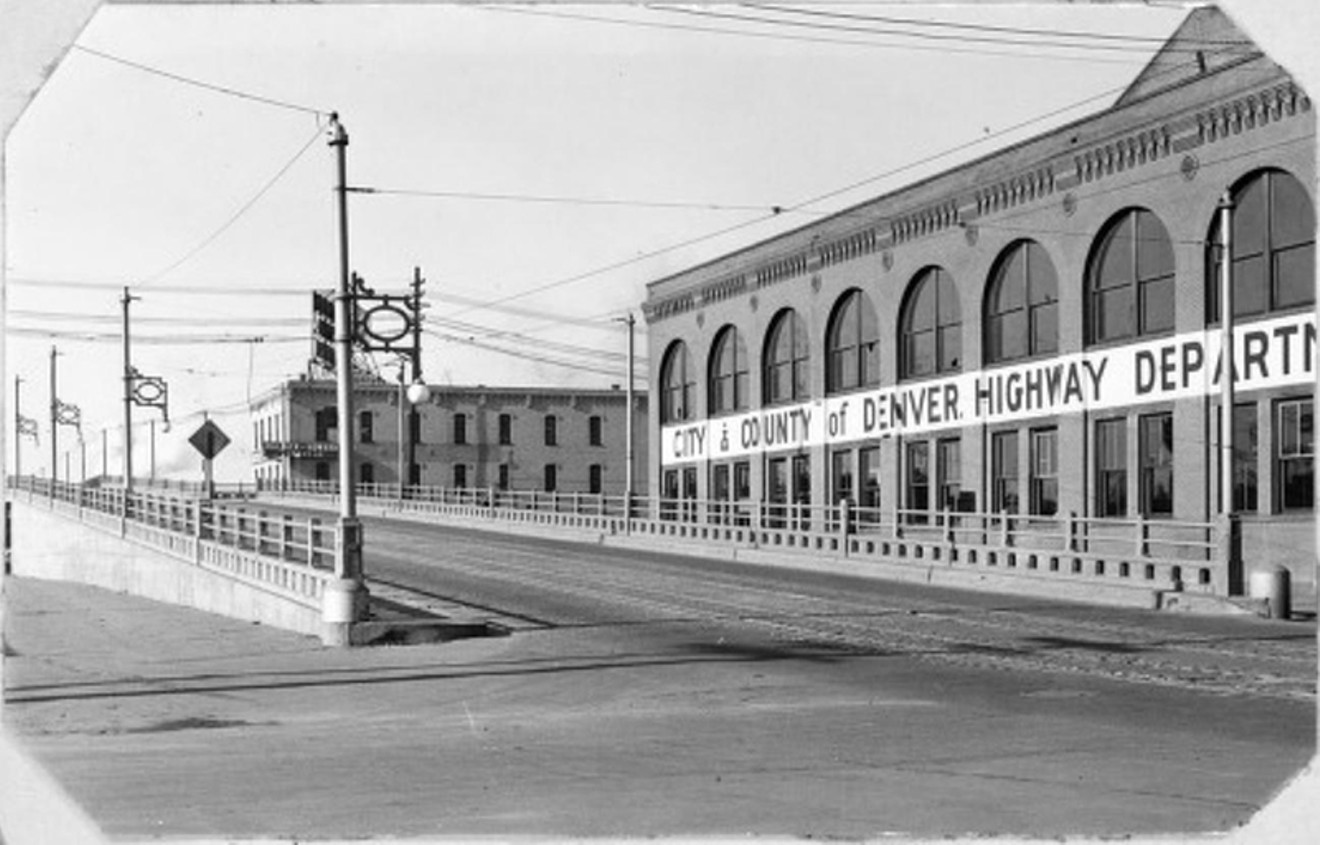 The Larimer viaduct at Eighth Street, one of the first streetcar routes. FasTracks
Long before light rail came to Denver, there were streetcars. They crisscrossed the city in a comprehensive public transportation system that stretched along Colfax, up and down Broadway, and reached out into just about every part of the developing city.

Now University of Denver graduate student Ryan Keeney has documented and digitized every streetcar line that ever existed in Denver, from the system's start in 1872 to its end in 1950, for Denver's Streetcar Legacy and Its Role in Walkability, a site that went live last month and in the process fulfilled a requirement for his master of science degree in geographic information science.

"This whole thing came out of my master's capstone," Keeney explains. For that requirement, students are encouraged to seek out clients, and his was former Denver Senior City Planner Andrew Rutz. When Keeney met with him at the Webb building last year, they started talking about all the "cool neighborhood main streets," Keeney recalls, and Rutz suggested Keeney do "a history on them, maybe tie in the streetcars."

"I kind of ran with that, and it turned into this project," Keeney says. But even he didn't envision the project getting as vast as it became, not until he started poring over documents, including Don Robertson's two-volume Denver's Street Railways, which had so much information that he was able not just to track every line that ever ran in Denver, but to do so year by year. But even after he'd "mined all the text" in the books by Robertson, the grandson of a tramway mogul, he had plot out and map the routes. And then "it took forever to digitize," he says.

The results are impressive. "Many people, even longtime residents of the city, would be surprised to learn that Denver once had a world-class public transportation system in the form of streetcars," Keeney writes in the introduction to his project. "These street railways existed for 78 years of the city's history and at its height their tracks once densely covered a large portion of the modern city proper.... Although long gone today, evidence abounds of the streetcar's presence in the city, mainly in the form of old commercial strips lining arterials like Colfax and Broadway, and embedded in neighborhoods on streets like South Pearl and Tennyson." The South Pearl Street business district grew along streetcar lines.
southpearlstreet.com
Originally from Indianapolis, Keeney discovered one of those strips soon after he moved to Denver for school. "I was struck immediately when I first came upon South Pearl Street," he says. "I remember I rode my bike up that street from campus, and I thought, 'Wow, this is a really nice neighborhood.'"

And as he began mapping out his project, Keeney realized that there were actually 100 such neighborhoods that had grown up around streetcar lines, though they ranged greatly in size. Since they didn't have a technical name in academic planning literature, he wound up dubbing them Streetcar Neighborhood Commercial Developments and divided the SNCDs into four types, excluding Broadway and Colfax, which were almost uninterrupted commercial strips "and have a completely different feel," Keeney says.

Here's how the 100 SNCDs break down: seven are Exceptional Main Streets (think Tennyson, South Pearl, the core of Santa Fe Drive around Ninth); 35 Quality Clusters (block-long developments); 15 Mixed Main Streets (with a mixture of car- and pedestrian-friendly buildings); 18 Mixed Clusters (smaller groupings); 18 Corner Stores. And seven of the SNCDs found through his research qualified as Degraded/Destroyed.

He followed all the city's streetcars through these corridors and clusters to the end of the line — both in geography and time. The first streetcar debuted in 1872, where the Auraria campus is today, and went up Larimer to 16th Street, then over to Champa and on up to 27th Street. "It didn't last very long," he says, but other lines soon appeared. "The whole system was incredibly dynamic in its early history," he says. "There were little startups, crazy competition." Some of the lines were horse-drawn, some operated by coal-powered cable. And then, finally, came the electric streetcars.

By the turn of the last century, the streetcar lines had all been consolidated under the Denver Tramway Company. "The whole system probably peaked in the 1910s, in terms of coverage," Keeney says. The last new line was added in 1923, and after that, the smaller routes started dying off, until finally the Colfax and Pearl lines ended in 1950. "The big problem with streetcars today, what led to their demise, is they had to compete with cars, and in mixed traffic," he points out.

Keeney himself doesn't get out too often in that mixed traffic. He says he's a "big fan of FasTracks" and doesn't have a car, "because, you know, poor grad student." So he rides his bike a lot and wishes there were more public transportation in the central city.

Because as his capstone project shows, it worked once before.