5. Minnesota Wild
This spot came to a playoff between the Red Wings and the Wild, but the Wings suck now and, frankly, the Avs have done their fair share of sucking for the last decade or so (though things sure are looking up). Sadly, the Wings-Avs rivalry is really a thing of the past, especially with Detroit now in the Eastern Conference.

Meanwhile, the Wild rivalry has been simmering for some years. With the young, talented Avs on the way up and Minnesota a perpetual contender in the same conference, a few testy playoff series and maybe a viral Deadspin video or two of drunk Wild fans doing stupid shit, and Minny fans could well rocket their way up this list.

4. Golden State Warriors
The main reason that Warriors fans are so high on this list is because there was no such thing as a Warriors fan until Steph Curry became amazing about five years ago. Just like Seattle Seahawks fans magically appearing out of the woodwork sometime around 2011 (Seattle receives honorable-mention awards here), Warriors fans were an endangered species until they started winning. Now, all of a sudden, the Can turns into a 15 to 20 percent mix of Curry and Kevin Durant jerseys twice a winter.

We're betting 90 percent of those fans don't know that the Warriors' biggest claim to fame until Curry came along was the fact that their best player in the 1990s, Latrell Sprewell, choked then-coach P.J. Carlesimo after a practice in 1997.

Don't forget to cut the price tag off your The City jersey.

3. St. Louis Cardinals
Before I started texting a group of trusted friends and colleagues, I didn't see this one coming. But my buddy Paul Klee, ace sports columnist at the Colorado Springs Gazette, made a strong case. "I go to the mountains that weekend," Klee, a Colorado native, says of the annual three-day invasion of Cardinals red at Coors Field.

So why are the Cardinals, the pride of a city that just lost its football team to Los Angeles (thanks to the Nuggets and Avalanche owners, no less), so loathed?

"Cardinals fan at Coors: 'St. Louis is the best!'" Klee: "Then why do you all live here?" Klee says of St. Louis baseball die-hards.

Arrogance is what's catapulting redbird fans into a top-three slot. Remember, we're not ranking our most hated teams (if so, the Cardinals probably wouldn't even be a candidate); we're ranking the most annoying fans. We all know Denver isn't (yet) the truest of baseball towns, but spare us the we're-better-than-you crap. Plus, we all know Denver is a way better town than St. Louis. Just ask their red-clad refugees. 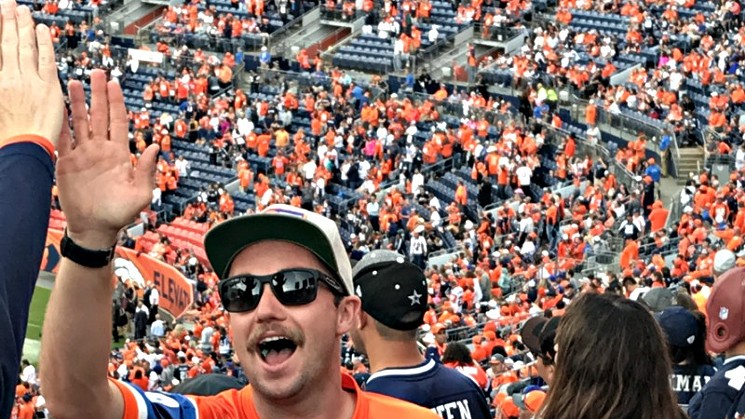 Photo by Lora Roberts
2. New England Patriots
This may not be well known to some Colorado sports fans, but the Patriots have traditionally played last fiddle on the Boston sports totem pole for a couple of reasons. The Red Sox are the baseball-crazy city's first and truest love, followed closely by the legendary Celtics and Bruins. The Patriots, meanwhile, were the pinnacle of mediocrity, making the playoffs just nine times in thirty years after joining the NFL in 1970. Plus, the Pats play their games in middle-of-nowhere Foxboro, which would be like the Broncos playing their home games in Larkspur. Anyone remember how the Pats nearly moved to Hartford, Connecticut, in the late ’90s?

But a few years later, Tom Brady and Bill Belichick came along and, well, the rest is history. The Patriots were the ugly kid in middle school who underwent a growth spurt and shed his acne the summer before high school. Boston has absolutely "loved" the Patriots for a solid fifteen years now, as their overly obnoxious fans love to remind you.

The Pats are usually the best team in the NFL, and nothing draws out a good ol' fashioned slurred Bostonian accent like a chance to yell "Tawm Brady is a gawd" fifty times while throwing back a Sam Adams or fifteen at Corporate Sponsor at Mile High's finest parking facilities. Fortunately, the Broncos and Patriots won't play each other in the 2018 regular season. 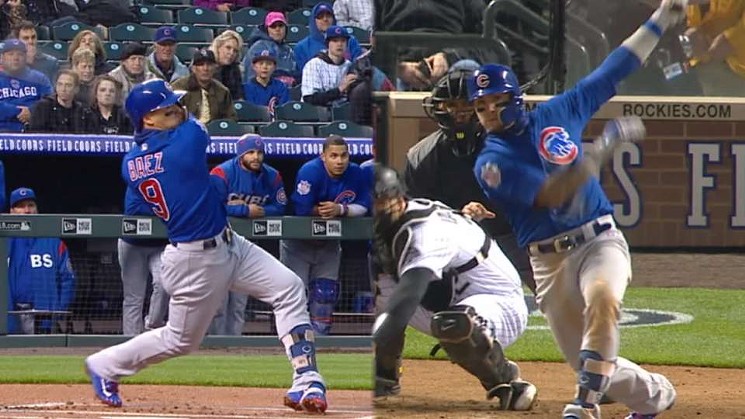 The Cubs routed the Rockies on April 20.
mlb.com
1. Chicago Cubs
From the die-hard, lifelong Cubs fan who moved here a year ago after surviving Steve Bartman and Billy Goat to That Friend We All Have who suddenly dusts off a Cubs hat just to remind you he's from Insert Chicago Suburb Here but can't name a single player on the roster, Baby Bear Nation serenades Coors Field with W flags, Old Style and road jerseys each and every year.

They display a weird mix of admirable, perhaps even enviable hometown and serious baseball pride combined with Okay-I-get-it-you're-from-northern-Illinois annoyance. But don't just take it from some fanboy writer. The annual I'm-from-Chicago invasion is irritating, even for Rockies players of years past.

"It sucks for players when there are more of the other teams' fans at games," says Jason Hirsh, a former Rockies pitcher who started nineteen games in the Rockies' 2007 World Series team. "With a World Series under the belt, [Cubs fans] are probably not much better."

Sure, Colorado's professional baseball team is merely a quarter-century old, with just four playoff appearances and one weird dinosaur mascot to show for 25 years of loyal fanship, but it's hard to beat our beloved state's overall record. If watching WGN in Joliet and periodically spending $200 on a home game is so amazing, then why, exactly, are those Cubs fans here?

"Before they won it all, it was the woe-is-me bullshit," lifelong Colorado sports fan Josh Pennock says. "Now it's how they still act like a tortured fan base. Also, the fact that Coors Field brings in Old Style for the Cubs series pisses me off."

Congratulations, Cubs fans: You're the unquestioned top pick for this list.

Like this list? Hate it? Want to move teams around on the order? Are you a Silicon Valley transplant who just Googled Kevin Durant? Send us your feedback!