Do You Recognize Man Who Vandalized Colorado Muslim Society Mosque? 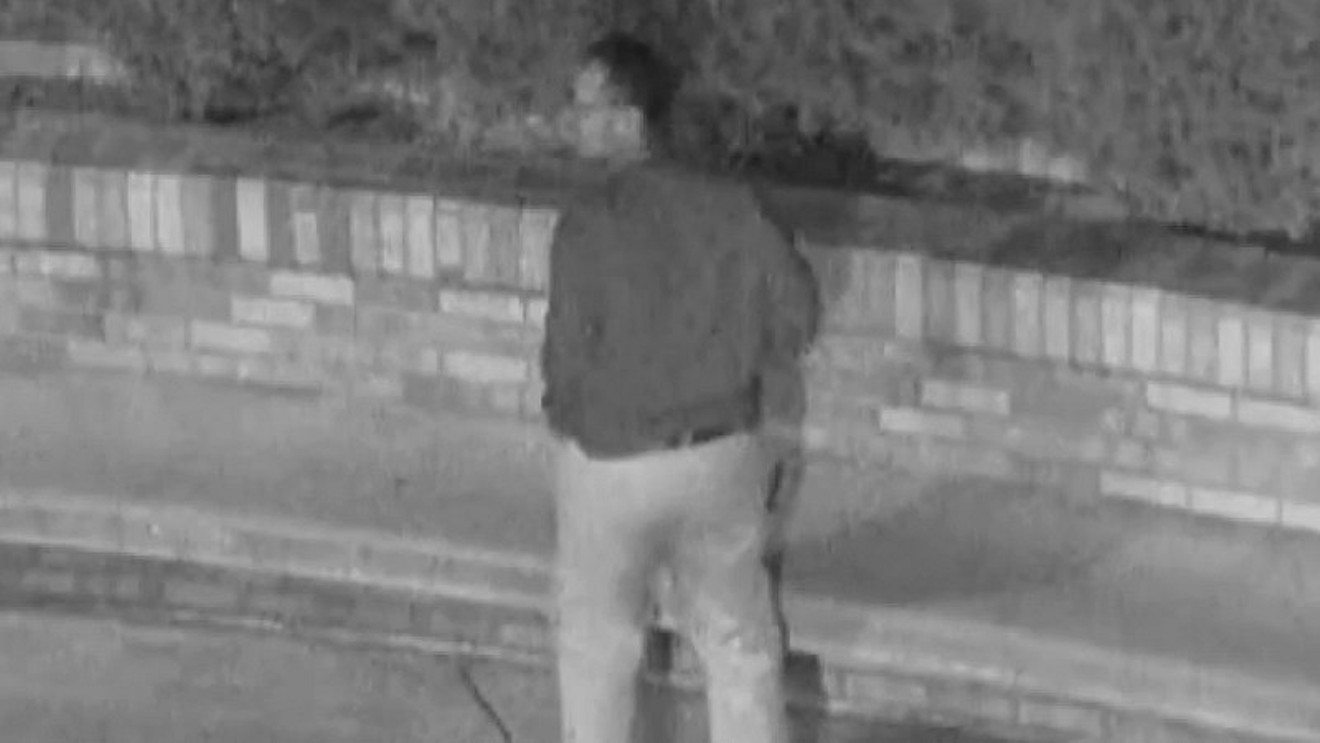 The case is under investigation by the Arapahoe County Sheriff's Office, and the Aurora Police Department is also involved.

In an interview published yesterday in an update of our original post about vandalism at the mosque (see our previous coverage below), mosque spokesperson Iman Jodeh confirmed that cameras at the facility had captured video of a suspect. At that time, however, she said no decision had been made about whether to release images from that footage.

Now, CMS has done so. A man can be seen checking a door at the mosque to see if it is locked; it was. Here's a screen capture from that moment, complete with a time stamp showing that the suspect was on the scene at just past 1 a.m. on Sunday the 26th. 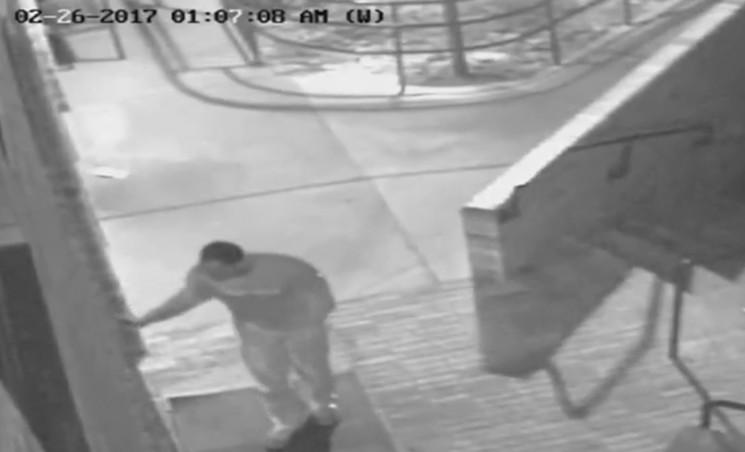 Courtesy of the Colorado Muslim Society
The image at the top of the post shows the man seconds before he threw the rock, which reportedly traveled as far as fifty feet into the building.

At this point, no arrests have been made in the incident.

If you recognize the man or have any additional information, you're encouraged to contact the Arapahoe County Sheriff's Office at 303-795-4711. Continue for our previous reports.

Original post, 6:52 a.m. February 27, update below: On Sunday, February 26, hours before an Academy Awards ceremony whose celebration of diversity was symbolized by a best-supporting-actor Oscar win for Mahershala Ali, the first Muslim to claim victory in a major acting category, the Colorado Muslim Society was the victim of vandalism prior to morning prayer. 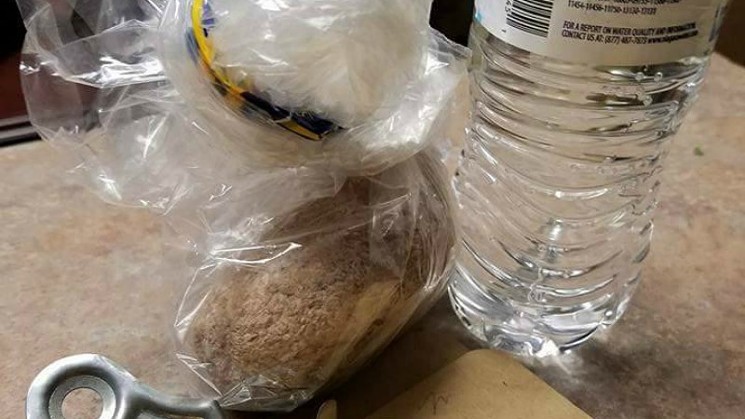 A rock hurled through the window of the Colorado Muslim Society mosque.
Facebook
Specifically, a rock was thrown through a window at Masjid Abu Bakr, the main CMS mosque, located at 2017 South Parker Road.


Sad news for our Masjid today. Masjid Abu Bakr was vandalized before fajr prayer. Someone threw a rock through one of the windows. CMS personnel is working with the proper authorities. May Allah protect us....

Fajr is one of five prayers offered daily by practicing Muslims; the others are Zohar, Asr, Magrib and Isha.

The February prayer schedule for Denver listed at salehtimes.com lists the fajr time for Sunday, February 26, at 5:23 a.m.

The photo at the top of this post was accompanied by another image of a board placed over the damaged window: 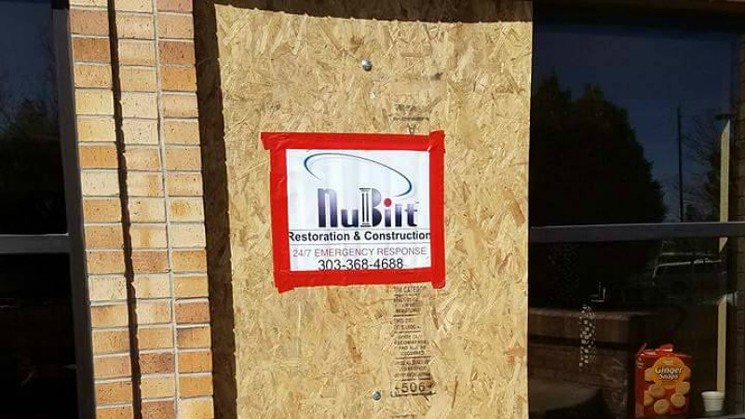 A board placed over the mosque's broken window.
Facebook
This is not the first time the mosque has been the target of an attack. In May 2015, a fire was set inside a stairwell at the facility. The Arapahoe County Sheriff's Office distributed a photo featuring a woman identified as a person of interest, but no arrests were reported in the case.

The images seen in this post were also shared on Facebook by Colorado Muslim Society spokesperson Iman Jodeh. We've reached out to her and will update the post with any new information we receive.

"We are working with the Arapahoe County Sheriff's Office and the Aurora Police Department," she says. "They were notified immediately after we saw what happened, and we're working closely with them. There's an active investigation open."

She adds that there's surveillance footage from the mosque of a possible suspect in the case. There has not yet been a decision made about whether this material will be released to the general public. 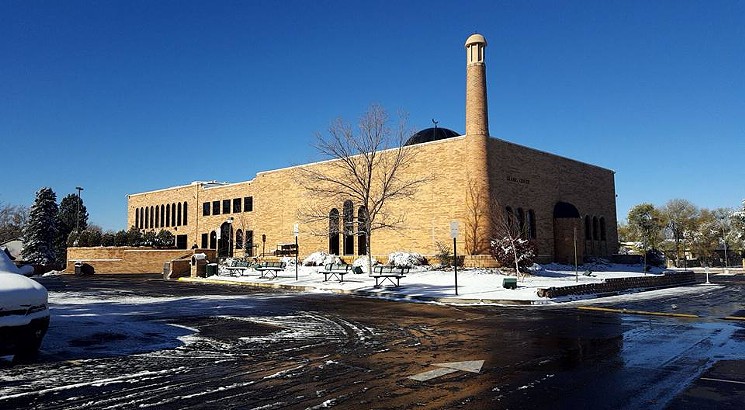 Masjid Abu Bakr, the Colorado Muslim Society mosque.
Facebook
When asked whether there have been previous incidents like this one at the mosque, she replies, "We've been lucky. We haven't had anything."

That includes the aforementioned 2015 matter that was described by the ACSO as a possible arson case. While she wasn't in her current role at the time of that matter, she says it's her understanding that what happened may not have actually been a crime. She confirms that no one was arrested or charged.

Moreover, she continues, "We've had a lot of support from the community. After I posted about what happened on Facebook, we got a lot of supportive comments from the non-Muslim community, which has been fantastic. I think it just reinforces how America's already great" — a reference to then-presidential candidate Donald Trump's frequent pitch to "make America great again."

"Fortunately, we live in a state that's incredibly supportive and open-minded," she continues. "In other states, we've seen mosques burned to the ground, and we're not immune to those things. To say that we are would be silly and careless, so we're taking precautionary steps that, for the safety of the mosque, we can't share. But every time we need support, people have come out in droves to support us. And we want to make sure Muslims and non-Muslims alike in our community feel safe and support each other."