Yankee Doodle Dandy: Welcome to the Dog Days of Summer 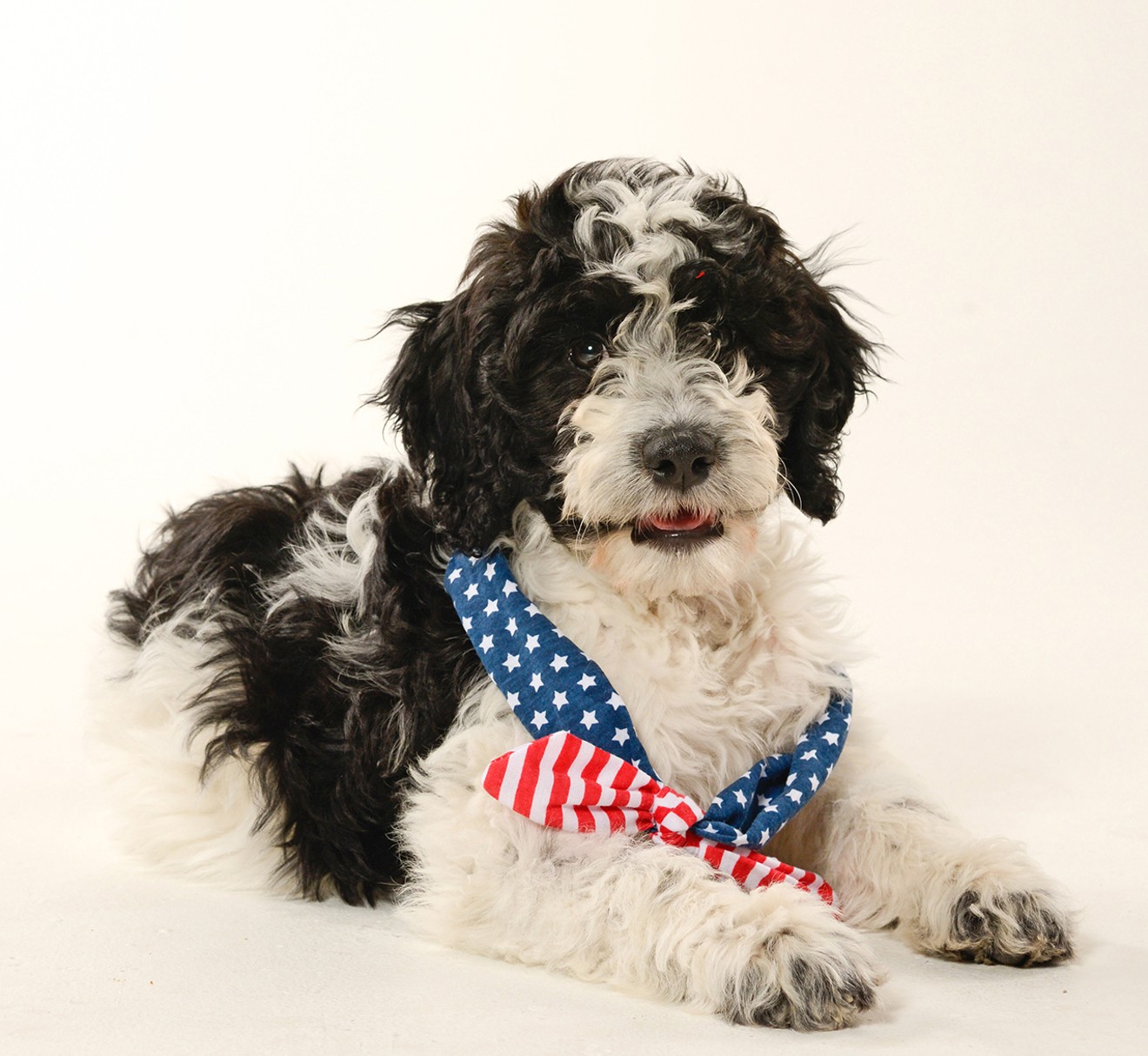 Moses Bielenberg, Brittany spoodle. Chad Chisholm
COVID-19 arrived in March, and it was soon followed by a pandemic of puppy adoptions. Among the most desired dogs: oodles of doodles, including Bernedoodles, a Colorado specialty.

Doodles have been around for decades. The trend started in the 1950s, when an Australian breeder mated a miniature poodle and a cocker spaniel to create the cockapoo. Soon poodles were being fixed up with all kinds of breeds. In the 1980s and 1990s, the Maltipoo (Maltese and toy or miniature poodle) and Lhasapoo (Lhasa apso and poodle) joined the lineup. By the turn of this century, goldendoodles (golden retriever and poodle) and Labradoodles (Labrador retriever and poodle) had almost surpassed their purebred parents as favorite family pets.

“Poodles tend to be smart dogs with good dispositions,” explains Dr. Michelle Woolly of the Park Hill Veterinary Medical Center. “A lot of people seem to like that aspect of the breed, but also want traits that other breeds are known for. The cute variations of the doodle name also play a big role. … They have become a common breed at our practice. Golden-, Labra-, Aussi-, sheepa-….”

And then the Bernedoodle — a mix of Bernese mountain dog and poodle — bounded onto the scene. Bernedoodle Sir Elton Doodle John, or “Elton” for short.
Chad Chisholm
“There’s a lot of science that goes into genetics and breeding of a doodle mix,” says Kathryn Hadfield, who runs Alpine Bernedoodles in Montrose, which has become a hotbed of Bernedoodle breeding. “I was a veterinarian technician for sixteen years…. It was close to my retirement when a breeder and longtime client, Tammie Rendon, came in with the most adorable puppy I’d ever seen.”

It was a Bernedoodle.

“I worked in health care for 35 years managing radiology departments,” explains Rendon. “I bred Australian Labradoodles on the side for fifteen years and got into Bernedoodles eight and a half years ago. I retired five years ago and now just breed dogs. Labradoodles were my starting point for real dog breeding. I still have some Australian Labradoodle litters, but usually just for breeding stock.”

Instead, Bernedoodles became the focus at what Rendon named Rocky Mountain Bernedoodles. “I was one of the first four breeders in the U.S. for Bernedoodles, so my puppies are very popular,” she says. Fortunately, her family helps out.

“My grown children whelp litters and are my dog groomers,” she adds. “You have to be creative. I am passionate about dog breeding and doing something to improve the breed.”

So is Hadfield. Her twelve-acre property was originally intended to support her horse habit, but that changed in 2013. Today it houses her signature Bernedoodle brand and the kennel where she keeps five stud dogs and five females for breeding. She’s dabbled in miniature and “gem” groups, which are increasing in popularity, as those dogs tend to be under seventy pounds — which is small for a Bernese mountain dog.

And Bernedoodles are now a big business. There are currently over 100 Bernedoodle breeders in the nation, with countless more unlicensed backyard breeders. Montrose alone has five reputable breeders, as well as the largest reproduction specialty clinic for doodle mixes on the Western Slope.

Maia Brusseau and friend at the Denver-based Dumb Friends League.
Courtesy of Maia Brusseau
While many people wait for Bernedoodles, some people just want companionship these days. As a result, shelters have seen a surge in adoptions during the pandemic and have had trouble keeping up with the demand.

“We had to go on a four-week adoption hiatus when the pandemic first broke out,” explains Maia Brusseau, spokesperson for the Denver-based Dumb Friends League. “We continued to take in animals during this time period. Therefore, we were ecstatic to return to work and see that the demand for adoptions had sharply increased. Spring is always a popular time, due to an abundance of litters and warmer weather. Compound those factors with a rising need for companionship during isolation, and our level of interest skyrocketed.”

The Denver Dumb Friends League adopted out 6,618 dogs and puppies, 6,605 cats and kittens, 200 horses and 1,127 small pets such as rabbits and hamsters from its Franktown location in 2019. This year could have easily beaten those numbers, but the group has had to go to virtual appointments, and the wait is four weeks. “We are currently looking at our adoption process to make it even more streamlined and efficient so we can keep up with the demand for animal companionship during the COVID era,” Brusseau says.

And if you’re looking for a specific dog from a breeder, you’re going to have to be prepared for a very long wait.
“By the end of March and early April, I was getting over 20 phone calls a day and about 25 to 30 emails a day,” says Hadfield.

“Pre-COVID, the wait time for a doodle was probably about two months. We always had waiting lists, but since COVID, the waiting time has definitely increased,” notes Blane Hrabe, owner of Bow Creek Kennels in Kensington, Kansas, the original breeder of the Brittany spoodle. “We are now looking at about a six-month wait on Brittany spoodles and a four-month wait on Bernedoodles. Both breeds are very popular, and the COVID stay-at-home orders seemed to increase the demand for puppies across the board.”

Pet services around town have noticed the increased interest. “We have had current customers report it has been difficult to find puppies to adopt,” says Kaiti Asmussen, owner of Mouthfuls Pet Boutique. “Doodles are definitely topping the list, and we have also seen so many new shepherd and terrier mixes coming in. But the biggest rise is Bernedoodles because of their temperament — so happy and energetic, and they can be very intelligent and easy to train.”

Goldendoodle Molson Mesereau.
Chad Chisholm
“It certainly is a doodle world,” adds Dan Lipschultz, top dog at Out-U-Go! in Denver and Boulder, a dog-walking and pet-sitting service. “They’re taking over. In all seriousness, we’ve seen an increase in a few doodle varieties in recent years. They’re fun breeds, with lots of energy, and they’re always up for long walks.”

Robert Corman, owner of Ciji’s Natural Pet Supplies in Park Hill, says that once the store was allowed to reopen, it had more puppies visit than ever before. And many of them were doodles — Labradoodles, goldendoodles and Bernedoodles — whose popularity he attributes in part to the fact that they don’t shed.
But that presents a challenge during stay-at-home orders. “Doodles usually require a good amount of grooming,” notes Asmussen. “Since they don’t shed, their hair can become matted easily. A good brush collection will be super-useful, and a great groomer would be even better!”

Hadfield notes that people who had never considered a dog before the pandemic were often looking for two traits common to doodles: They don’t shed, and they don’t aggravate allergies in most humans.

“These characteristics will lead to increased desirability and more options,” she says. “I run a very manageable kennel. The onset of COVID-19 was extremely stressful. We couldn’t ship our puppies, and that is 60 percent of my business.” She often had to resort to Flight Nanny, a pet delivery service that picks up animals and delivers them throughout the United States and Canada.

Hadfield’s puppies are popular in New York, Boston, Chicago and Los Angeles. “We work with an advertising agency in Los Angeles, and our Bernedoodles have been in Buick Enclave and Kia car commercials and advertisements for cell phones,” she says. “They respond well to commands on set, and the audience has engaged with the breed quite well.”

And audiences for commercials have never been bigger than during the pandemic. “As a shelter, we see every type of dog breed come through our doors, but there are definitely major influences from pop culture,” says Brusseau. “With doodles, we can’t really tell how many we are taking in and adopting out, as they are usually just listed as a mixed breed, but I can tell from the curly hair that there are more and more finding our shelter and then permanent homes.”

A doodle results from any purebred dog bred with a purebred poodle, which can be either parent. From there, the mixing can produce hundreds of doodle types, with varying percentages of poodle. There are large, medium, small, miniature and even toy versions of many of the breeds; nothing is out of doodle realm.

Here are just some of the oodles of popular doodles, and their most prominent characteristics:

Bernedoodle
Bernese mountain dog + poodle
Poised to be the number-one doodle in 2020, this fun-loving dog is a fiercely loving, quintessentially loyal family member.

Labradoodle
Labrador retriever + poodle
One of the most popular doodle breeds, the Labradoodle comes in large, medium and miniature versions.

Goldendoodle
Golden retriever + poodle
The new “designer” family pet, this breed comes in a variety of sizes but is consistently beige to tan in coloring.

Schnoodle
Schnauzer + poodle
By far one of the best-named doodles, this dog comes in a variety of colors and sizes, ranging from 10 pounds up to 75 pounds of curly love.

Ruby Kaplansky, "micro-mini" Bernedoodle.
Chad Chisholm
Sheepadoodle
Sheepdog + poodle
This is one of the fastest-growing doodle breeds, thanks in part to the fact that it’s very low-shedding compared to one immensely hairy parent.

Cockapoo
Cocker spaniel + miniature poodle
The OG of doodles and designer dogs, this pooch is in the middle of a fifty-year-plus love affair with Americans.

Westiepoo
West Highland terrier + poodle
This is a popular choice for families with young children. Terriers are typically smaller-sized breeds, and when bred with a miniature poodle can create a tiny ball of white fluff.

Newfypoo
Newfoundland + poodle
Thought to have been created in 2009, this large doodle loves big spaces and is quite docile with children.

Cadoodle
Collie + poodle
The popular, non-shedding working dog is available in smaller and larger sizes, and well suited to large Colorado expanses.
KEEP WESTWORD FREE... Since we started Westword, it has been defined as the free, independent voice of Denver, and we'd like to keep it that way. With local media under siege, it's more important than ever for us to rally support behind funding our local journalism. You can help by participating in our "I Support" program, allowing us to keep offering readers access to our incisive coverage of local news, food and culture with no paywalls.
Make a one-time donation today for as little as $1.