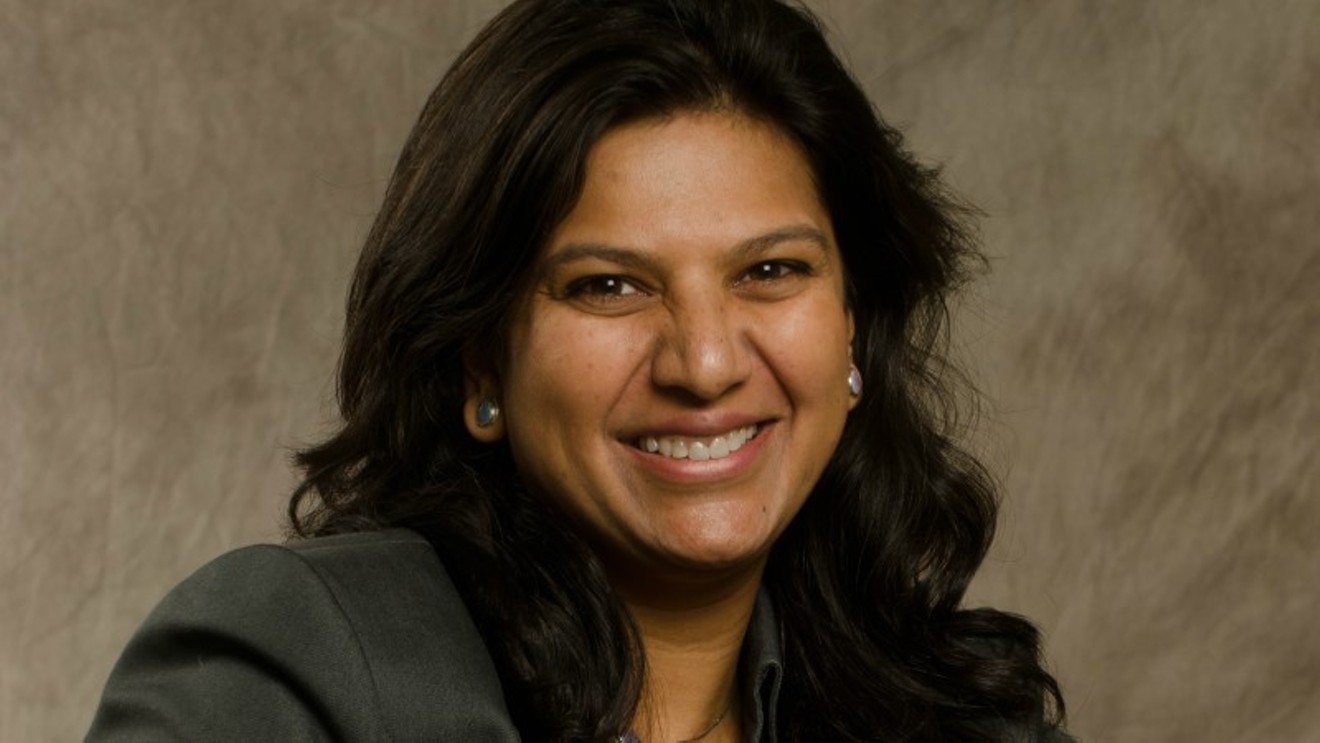 Rashmi Goel has been an associate professor of law at the University of Denver for seventeen years. Courtesy of Rashmi Goel
Last year, the University of Denver agreed to pay $2.66 million to resolve a lawsuit filed by the Equal Employment Opportunity Commission, which accused DU of paying all of its female full law professors less than the mean average salary of male full profs at the law school.

Now, Rashmi Goel, an associate professor at DU's law school for the past seventeen years, has lodged a similar complaint against the university — though its gender claim is twinned with one related to race. The document, accessible below, reveals that the acclaimed scholar and chair of the Rocky Mountain Collective on Race, Place and Law (shorthanded as RPL), who's of Asian descent, is the lowest-paid associate professor at the institution despite having served there the longest.

The university offered the following statement about the lawsuit: "We care deeply about fairness, equity and opportunity at DU. These are values that we hold in highest regard and seek, always, to model in our community. We have been working very closely, in cooperation with the Equal Employment Opportunity Commission, to ensure we meet the spirit and intent of the EEOC settlement we reached last year. We are determined to provide fair and equitable compensation for everyone in our community."

Goel wasn't covered under the previous settlement because it was specific to full professors; associate professors are tenured, too, but fall into a separate category. However, she learned about the gulf between her pay and that of her fellow associate profs because of the previous matter: The consent decree (also shared below) required that DU make the salaries of professors at the law school available to them, too.

On January 31, Goel recalls, "the law school sent out the link to access the salary disclosures, and when I saw I was the lowest-paid associate professor, I was dismayed. I have had extremely positive evaluations. I love teaching. I love my students, and my students say they love me. I've had nothing but tremendous support from my students and colleagues for all the things I do — and to find out that was discounted entirely or not reflected at all in my compensation was disheartening to me."

Compounding the shock, she continues, was learning that "the disparity was so large. It was huge." Goel discovered she was making around $30,000 less, on average, than the eleven other law school associate professors. Moreover, the difference between her salary and that of the highest-paid associate professor was $46,000, even though the latter had been at DU for six years less than Goel.

The University of Denver law school.
YouTube file photo
One other Asian female associate professor is paid more, but attorney Charlotte Sweeney of Sweeney and Bechtold, LLC, who represents Goel, regards her as an outlier since "that person is the former dean's wife."

The defendant in the Goel suit is listed as Colorado Seminary, DU's name when it was founded in 1864 — and there's plenty of history associated with lower pay for female professors at the law school. The previous case focused on DU law professor Lucy Marsh, who was hired in 1976 at an annual salary of $16,800, while a man brought aboard to fill the same position at that time received $19,000 — and this discrepancy didn't vanish as the years went on. In fall 1982, when Marsh was promoted to full law professor, her salary was $37,320, while the man, who also earned a promotion then, received $40,500. And by October 2013, this gap had widened considerably. Marsh was being paid $111,977 — a healthy sum, but the male professor by then was earning over $75,000 more.

DU was aware of the problem, as witnessed by a 2012 memorandum in which then-law school dean Martin Katz wrote that "the median salary for female Full Professors was $7,532 less than that for males before this round of raises and $11,282/year less than that of males after this round of raises." But the university fought the lawsuit vigorously for years before finally caving in May 2018.

In a subsequent commentary sent through DU's internal news system, Chancellor Rebecca Chopp didn't offer an apology.  The university "undertook the settlement process with great seriousness, deliberation and care for all involved," wrote Chopp, who announced in April that she'd be stepping down as chancellor. "While confident in our legal position, we made this decision because of a strong desire to heal our community and move forward together. We believe this settlement will allow us to collectively focus on a present and a future in which the law school — and the DU community as a whole — can unite under our common values of equity, integrity and opportunity."

Putting this pledge to the test, Goel met with the current law school dean, Bruce Smith, on March 1. In her words, Smith "expressed surprise about the disparity. He seemed to feel that it was important and pressing and that he would try to resolve it or work on it immediately."

However, she says, "nothing was done. I followed up with an email about ten days later and received an email back a couple of days after that. But there was nothing of substance in it. It didn't say, 'I have already met with the administration and we're going to fix this,' or anything like that. Very quickly after that, we sent a demand letter" that proved to be a precursor to the lawsuit. Goel was able to move directly to this stage rather than go to the EEOC first because of the racial component, Sweeney reveals, saving years in the process.

McDaniel-Miccio was disturbed when she learned about Goel's dilemma, but not surprised. "Our case was confined to full professors, but DU has been discriminating against women and people of color for an extremely long time — so we knew in our hearts that the other categories were going to be affected, and it's been borne out." As she sees it, "Actions speak louder than words, and DU's actions tell us they have no commitment. It requires all of us to be vigilante."

The Rocky Mountain Collective on Race, Place and Law is founded on giving a fair shake to everyone; the DU website proudly describes the organization as "a group of Colorado legal academics working together to identify and address racial inequities in the U.S. and around the globe." Yet Goel points out that the university doesn't give her any kind of stipend for her efforts, and neither does it provide her with an administrative assistant, as it does for a number of other programs.

"I'm not blind to the irony at all," she confirms. "The university uses the work of RPL in recruiting students, and the dean has always applauded us for our work. But that is not reflected in the way the university is acting with these salaries. My scholarship and my work through RPL has always been in pursuit of greater social justice and greater equality for minorities, for people of color, for women. I don't think I would leave that mission because the university doesn't walk the talk. But I can't say it's always easy to separate them."

Of the law school's associate professors, "I've been there the longest, but I'm paid the least," she notes. "That doesn't make sense to me, and I know it doesn't make sense to any of my colleagues. And the university has known about this for so long. I didn't have occasion to know — and I would never have expected that in the wake of the previous litigation, the university would make no efforts to rectify this obvious disparity."

Click to read Rashmi Goel v. Colorado Seminary and the consent decree in the case of Equal Employment Opportunity Commission v. University of Denver.
KEEP WESTWORD FREE... Since we started Westword, it has been defined as the free, independent voice of Denver, and we'd like to keep it that way. With local media under siege, it's more important than ever for us to rally support behind funding our local journalism. You can help by participating in our "I Support" program, allowing us to keep offering readers access to our incisive coverage of local news, food and culture with no paywalls.
Make a one-time donation today for as little as $1.