Police officers and public officials at an ECNA community meeting. Westword
Since the murder of Ma Kaing in July, residents of the East Colfax neighborhood have repeatedly mentioned their distrust of the police during discussions of ongoing violence in the area.

Kaing was killed by a stray bullet coming from New Freedom Park, where a group of young men reportedly involved with a gang were firing shots at a car; Kaing was hit in front of her apartment building. After her death, residents complained about slow response times from the police, as well as ongoing communication problems. Ma Kaing was killed by a stray bullet in the East Colfax neighborhood.
Michelle Christiansen Photography
Scott Snow, the director of the Denver Police Department's Crisis Services Division, had noticed the community's lack of connection to the police back in 2019, when the CSD first began exploring the creation of a victim assistance coordinator program. "There’s no rec center there, there’s one elementary school, there’s no grocery stores. All of those things that help kind of create a sense of community are absent," he notes. Combined with language and cultural barriers, he adds, it was clear that this neighborhood was the right place to start the program once funding came through from the City of Denver.

East Colfax "is the highest concentration probably in the state of the largest number of refugees and immigrants; there’s probably ninety different languages and dialects spoken in a multi-block radius," Snow says. "So going back years, we realized that there’s often unique voices and needs coming out of that community. I think Ma Kaing’s death was a galvanizing and crystalizing event that [made] a lot of people united...demanding better access to services and better answers from the city across a number of fronts." 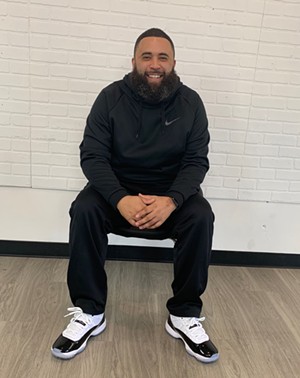 Matthew Roberts will be a liaison with the neighborhood.
Denver Police Department

On September 11, Matthew Roberts was named the DPD's first-ever victim assistance coordinator, assigned to the East Colfax neighborhood. "This is the first time we’ve done this model where we’re dedicating a full-time personnel to communities within a specific geographic region," Snow notes.

Roberts has been with the DPD since 2019, working in the CSD in District 2, which covers much of the northeast section of the city, including East Colfax. Before he joined the police department, he worked in Denver Public Schools, teaching at an alternative school and doing community engagement through parks and recreation.

As the victim assistance coordinator, Roberts will act as a liaison between the DPD and the East Colfax community. He says that he hopes he'll be able to bridge the communication and trust gaps, giving residents a face they can trust rather than seeing the police as an unhelpful entity.

Because this is a new role for the DPD, Snow admits that a lot of it will be experimental; Roberts will focus on building relationships with the community. "We’re approaching this more experientially," Snow says. "We want to put the right person in the right role and help inform us on what are the needs, what are the gaps, what are the resources, and really have a granular perspective with Matt as the operational boots on the ground within that community."

Choosing Roberts for the job was easy, Snow says. "We conducted an interview process that included the president of the East Colfax Neighborhood Association, and Matt was selected unanimously by our interview panel," Snow recalls. The panel felt that Roberts was not only prepared for the position, but had a real connection to the community.

Roberts formally introduced himself at an East Colfax Community Association meeting on September 20. "I just want to be a support where you know if something’s happening over there, they’re like 'Call Matt,' and I become that face of that community," he says. In his role, Roberts will be a point of contact in case of violent situations, as well as be on hand for such occasions as death notifications, suicides and traffic fatalities.

The DPD will soon conduct a community engagement survey in East Colfax to collect more information on perceptions of safety in the area, as well as perceptions of the Denver Police Department. After the September 20 meeting, Snow notes, a resident approached and began discussing how people in East Colfax don't like to talk to the police, even listing numerous criminal incidents when residents chose not to call the police.

But since that meeting, Roberts says he's received a lot of emails from residents welcoming him into the community.

"Being on the other side, I grew up in the summer of violence here. I was around it and really immersed," Roberts says of that tough time back in 1993, when gang violence was common in the area. "This is a passion of mine, and I genuinely care."
KEEP WESTWORD FREE... Since we started Westword, it has been defined as the free, independent voice of Denver, and we'd like to keep it that way. With local media under siege, it's more important than ever for us to rally support behind funding our local journalism. You can help by participating in our "I Support" program, allowing us to keep offering readers access to our incisive coverage of local news, food and culture with no paywalls.
Make a one-time donation today for as little as $1.
Katrina Leibee, a recent graduate of Colorado State University, is an editorial fellow at Westword, covering politics, business and culture.
Contact: Katrina Leibee
Follow:
Twitter: @katrinaleibee