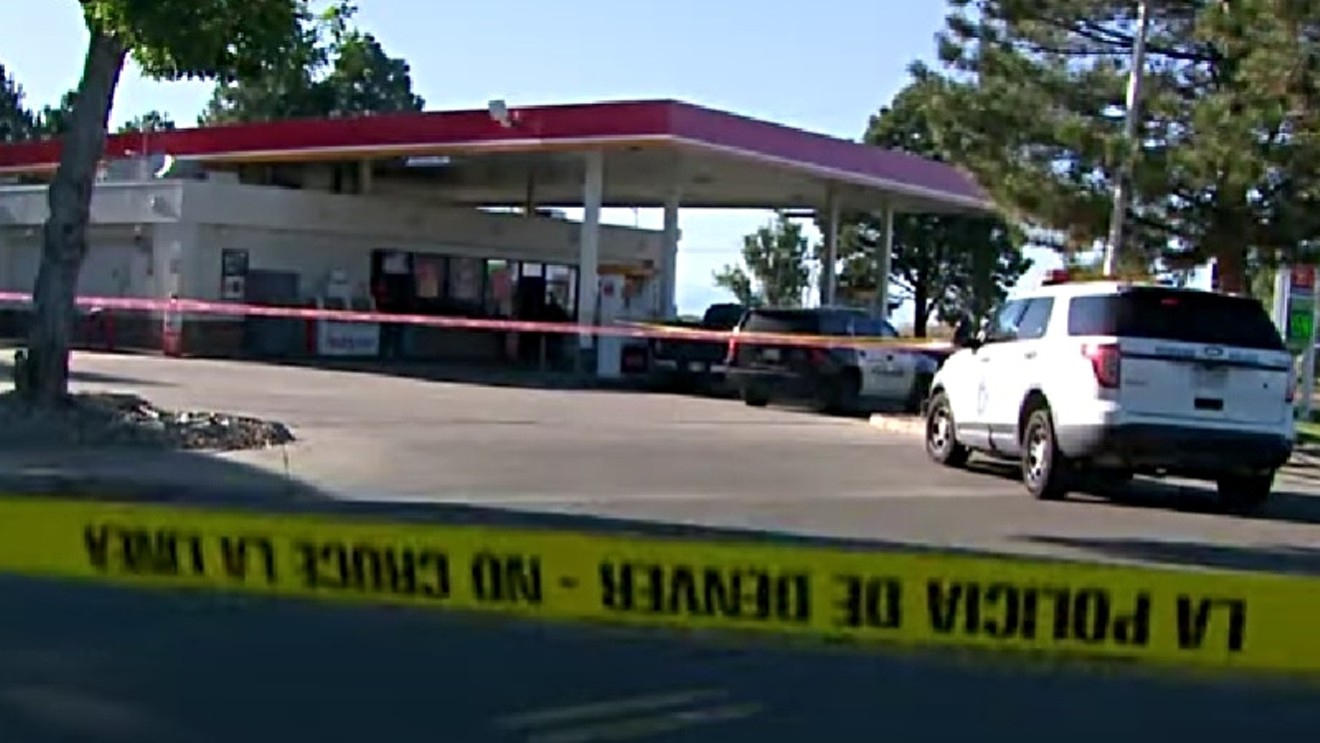 The scene of a fatal shooting near the intersection of Alameda and Galena on September 24. 9News via YouTube
It may be fall, but the metro area saw summer-weekend levels of violence from Friday, September 23, to Sunday, September 25. Incidents included two stabbings and six shootings, including one involving Aurora police officers who opened fire within Denver city limits. That resulted in one of two of this weekend's fatalities.

The Twitter account of the Denver Police Department was particularly busy late Friday and early Saturday, with two bulletins issued within three minutes of each other and a third coming along barely an hour later.

At 11:05 p.m. on September 23, the DPD reported a stabbing on the 1800 block of Larimer Street; an adult female was transported to a nearby hospital with what were described as non-life-threatening injuries. A  tweet at 11:08 p.m. detailed another stabbing near the intersection of Park Avenue West and East Colfax Avenue; an adult male was hospitalized for wounds not thought to be life-threatening. Then at 12:28 a.m. on September 24, Denver Police shared an alert about a double shooting on the 1500 block of Broadway; the victims were hospitalized but expected to survive.

Finally, at 4:38 a.m. on September 25, the DPD responded to a shooting on the 1600 block of Park Avenue West, in the Five Points neighborhood; an adult male was hospitalized.

The Aurora Police Department's weekend Twitter dispatches began at 11:58 p.m. on September 23, with an alert about a 54-year-old woman who was driven to an area hospital after being shot in the leg near the 14th and Chambers intersection.

Then came a series of tweets beginning at 4:24 p.m. on September 24 about an officer-involved shooting in the area of East Alameda Avenue and South Galena Way. This location is actually in Denver's Windsor neighborhood, but the shooting reportedly involved Aurora officers, as explained during an early-evening press conference featuring Denver Police division chief Ron Thomas, who was assigned to handle day-to-day operations at the DPD following the announced retirement of Chief Paul Pazen. According to Thomas, Aurora cops pulled over a vehicle they believed had been stolen, prompting one of the two occupants to flee. When he arrived at a fence, the suspect allegedly brandished a firearm, prompting the officers to shoot him, Thomas continued. He was declared dead at a nearby hospital a short time later.

Here's a video of the press conference tweeted by the DPD, which has been tasked with investigating what happened:

About an hour after the press conference, at 7:49 p.m. on September 24, the Aurora Police tweeted about a shooting on the 9300 block of East 19th Avenue; an adult male took a bullet and a woman suffered an injury from "debris," but both responded to treatment. Meanwhile, unknown suspects escaped on foot.

Finally, the APD distributed a release about a shooting that occurred in a parking lot at 2295 South Chambers Road at approximately 1:35 a.m. on September 25. Two men, ages 44 and 52, suffered multiple gunshot wounds; the younger man ultimately succumbed to his injuries, while the other was hospitalized in serious condition. At least three vehicles and one business were also damaged by gunfire.

Anyone with information about any of the shootings or stabbings can contact Metro Denver Crime Stoppers at 720-913-STOP (7867).
KEEP WESTWORD FREE... Since we started Westword, it has been defined as the free, independent voice of Denver, and we'd like to keep it that way. With local media under siege, it's more important than ever for us to rally support behind funding our local journalism. You can help by participating in our "I Support" program, allowing us to keep offering readers access to our incisive coverage of local news, food and culture with no paywalls.
Make a one-time donation today for as little as $1.