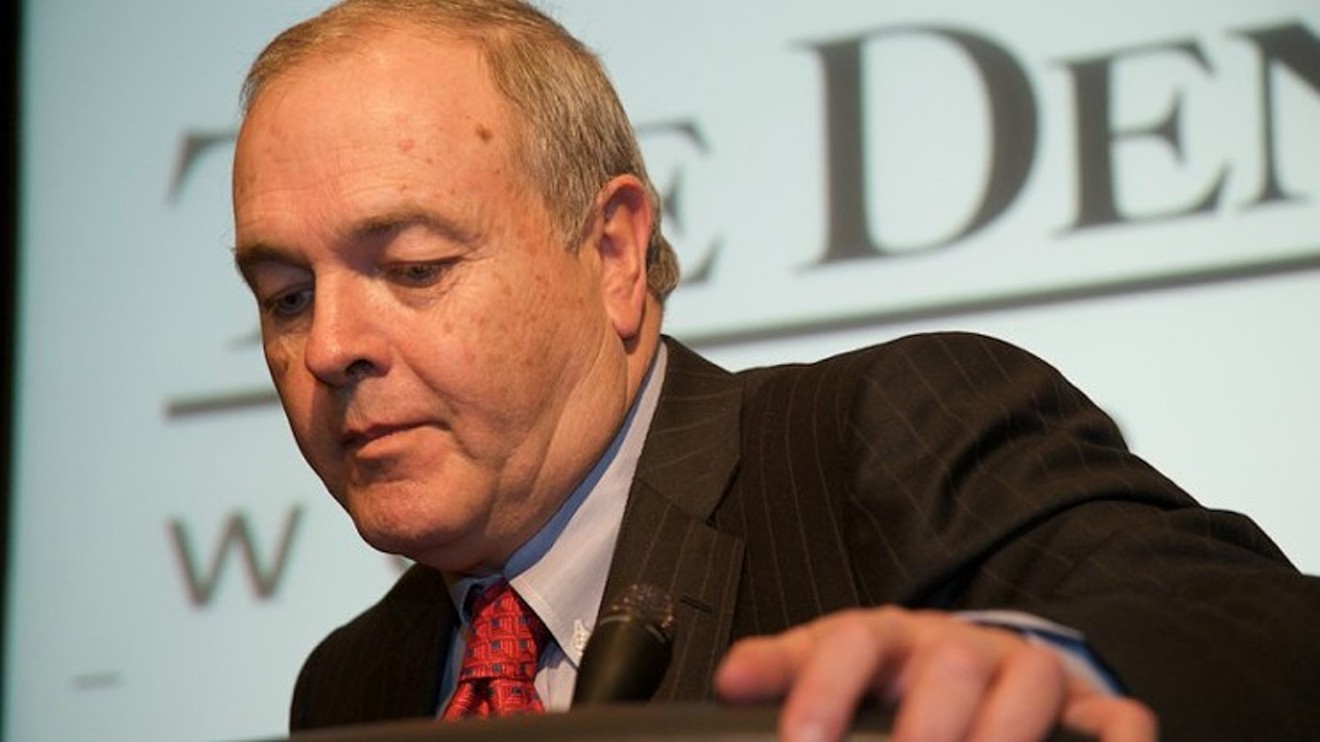 Dean Singleton at the February 2009 press conference announcing the shutdown of the Rocky Mountain News. Photo by J. Knight
Monday, September 14, will bring a bold new addition to the Mile High City media scene: the Denver Gazette, a digital news service financed by billionaire and Colorado Springs Gazette owner Phil Anschutz, currently the richest person in the state. Meanwhile, another significant online news purveyor, the Colorado Sun, marked its second anniversary yesterday, September 10, despite the June shutdown of Civil, a blockchain publisher at the center of its original funding plan.

What will these developments mean for local consumers and the Denver Post, which has been forced to make major cuts by its vulture hedge fund owner, Alden Global Capital, while dealing with challenges from the likes of Colorado Public Radio, which supplemented its already robust operation by purchasing the Denverite site last year? For answers to these questions and more, we reached out to the grand old man of Denver newspapers, Dean Singleton, former owner of the Post and a consistently incisive, opinionated and plainspoken commentator on the press in Colorado and beyond.

Although Singleton is a longtime friend of Anschutz's, he says he hasn't spoken to the billionaire about the Denver Gazette, which he sees as a smart way to establish a market foothold in a fiscally judicious manner — an approach that pivots on shared resources rather than any new personnel the publication has been touting in the run-up to its launch. But he's far less bullish on the Colorado Sun, which he sees as facing more serious headwinds with each passing day.

In our September 10 post, Denver Gazette publisher and president Chris Reen described the publication, offered through a subscription that will cost $9.99 per month or $99 per annum after a three-month free-access period, as "a daily, digital, interactive newspaper. And I say 'newspaper' because it's designed and edited like a newspaper, sectioned like a newspaper, with local news and Denver and state news and opinions and commentary and national and world news and sports and comics and puzzles, just like a newspaper, even though it's 100 percent digital."

The Denver Gazette has publicly boasted about having "over fifty staff and contributors based in Denver," but many of the biggest names, including sports columnist Woody Paige, political expert Joey Bunch and longtime journalism hero Lynn Bartels, already write for the Colorado Springs Gazette or its Colorado Politics affiliate. Reen won't say exactly how many people have been hired specifically for the Denver Gazette, but Singleton guesses that the number of reporters is probably closer to five — the same estimate offered by another Westword source.

Not that Singleton is critical of this approach. Indeed, it's one of the big reasons he thinks that the Denver Gazette's debut during a pandemic, when newspapers, TV stations and other news purveyors are being hit with major revenue shortfalls, actually makes sense.

"It will be an online edition of the [Colorado Springs] Gazette," Singleton predicts. "That's a net plus. With the declining number of people covering news today in every market, including Denver, it's always a positive to see somebody else put some fresh eyes on the market. But what they're doing is taking the Gazette newsroom in Colorado Springs, which is doing a good job covering Colorado Springs and Colorado politics, and they're going to add a few people in Denver." 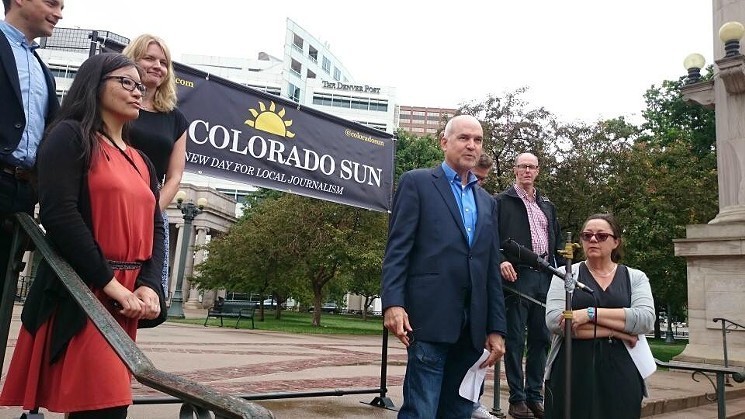 In June 2018, editor Larry Ryckman, center, and other members of the Colorado Sun staff announced the operation's launch in the shadow of the old Denver Post building.
Photo by Michael Roberts
"It's pretty clear what they're doing, and I'm not being critical of it at all. I've done this many times before in my career," Singleton says, referencing sharing resources across multiple platforms to lower costs. "And certainly they're covering news in the [Colorado Springs] Gazette that will be of interest in metro Denver. I think they've done a really good job with Colorado Politics; I subscribe to it and read it every day. And if you have two news institutions covering news, every day one of them is going to cover something that the other one didn't cover, and that's good for readers."

Just as important, he continues, "When you're doing it digitally, there's no real cost to it other than content — whereas if you tried to print an edition here seven days a week, there would be a huge cost to it. It's very low-cost because you're not buying ink and paper and paying for delivery. The investment isn't substantial, and even if it's only five people covering Denver who weren't covering it before, that's still important for people who really devour news every day."

At the same time he praises that angle, Singleton admits he's puzzled over why the site wasn't dubbed the Rocky Mountain News. After all, the tabloid, which folded in February 2009, was Colorado's oldest newspaper, and Anschutz owns the Rocky's moniker and archives. According to Reen, the Denver Gazette name was chosen because of all the capital poured into building up the brand since Anschutz purchased the Colorado Springs paper in 2012, but Singleton feels the Rocky "still has a lot of cachet. It's been gone for eleven years, but there are still a lot of people in Denver who remember it fondly."

As for the Post, which Singleton cherishes ("I wouldn't think about starting the day without it," he says), he doubts that the Denver Gazette "will have any real impact. The Denver Post, even with a much smaller staff, is still the newspaper of record in metro Denver, and it will continue to be — and they do have a print edition for those of us who like print." Moreover, he doubts that few people paying for the Post will dump the paper in favor of the Denver Gazette, because "I'm guessing the paid digital subscribers will never get very high."

The main effect of the Denver Gazette's arrival, then, could be qualitative, Singleton suggests: "If anything, their presence will cause the Post to want to push a little harder and be a little more aggressive. Anytime you have a competitor down the street, you push a little harder, and I think they will do that."

Likewise, Singleton doubts that the Denver Gazette "will help or hurt the Colorado Sun — but I don't think the Sun has a business model that can sustain in the long-term anyway. The Denver Gazette doesn't have to sustain itself, because it can draw on the overhead of the [Colorado Springs] Gazette. It's got a base of operations, and they're not depending on what happens in Denver because they're sharing the overhead. But the Sun doesn't have the Gazette's overhead to carry it."

Singleton emphasizes, "I don't have a dog in this fight, and anybody covering news is doing the Lord's work. But I don't see how the Sun is making it, frankly, with the number of people they have on staff, and I don't think they get a lot of good use out of it. I haven't been that impressed at all. I know a lot of the people, and they're really good journalists, but I don't see that they've used their resources very effectively — and worse than that, I don't see the revenue model that's going to keep them going."

Given Anschutz's practically bottomless pockets, the Denver Gazette doesn't need to worry about who'll pay the light bills, and Singleton thinks the move could be part of a long-term play to step in should the Post succumb to its struggles.

"It's a relatively small investment to have a flag in the Denver market and be prepared to react if they ever have anything to react to," he maintains. "If you've got a base in the market, then you've prepared yourself for consolidation down the road — and I think Phil and his team have done an extraordinarily good job with the [Colorado Springs] Gazette. I think the Gazette is a very good newspaper, and in Denver, I think they'll put out a daily product that will be worth reading."
KEEP WESTWORD FREE... Since we started Westword, it has been defined as the free, independent voice of Denver, and we'd like to keep it that way. With local media under siege, it's more important than ever for us to rally support behind funding our local journalism. You can help by participating in our "I Support" program, allowing us to keep offering readers access to our incisive coverage of local news, food and culture with no paywalls.
Make a one-time donation today for as little as $1.