Fentanyl for Kids? Scare Tactics Ratchet Up Over Controversial Bill 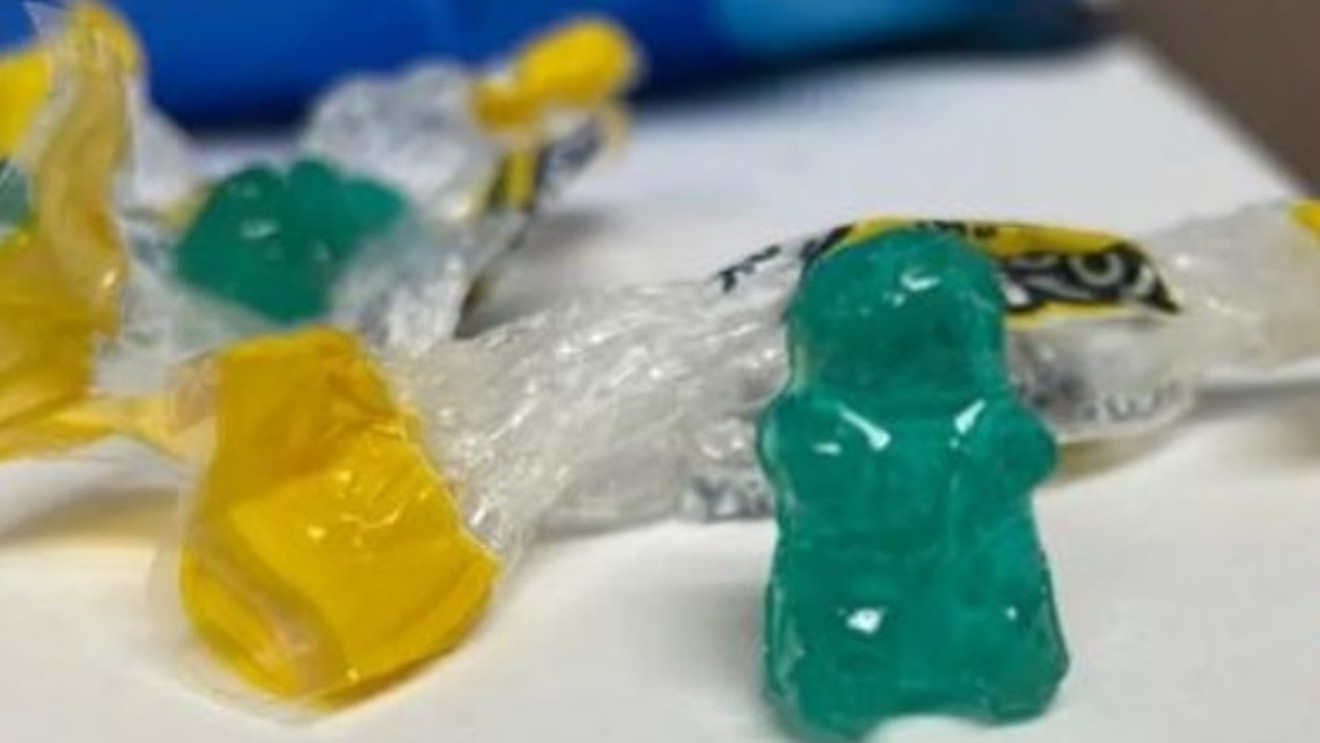 A photo of fentanyl candied shared by the 4th Judicial District DA's Office. 4th Judicial District DA's Office via onlineathens.com
At 8 a.m. today, April 22, "Fentanyl Accountability and Prevention," a controversial bill intended to address the crisis over the powerful synthetic drug, will go before the House Appropriations Committee, after which it's expected to be debated by the full chamber.

That exchange will pit harm-reduction advocates who favor a public-health approach rather than the sort of crackdown associated with the failed War on Drugs era against conservative legislators who want to make possession of the substance a felony.

Plenty of law enforcement agencies also back a full-scale crackdown, with arguably the most aggressive being the 4th Judicial District DA's Office in Colorado Springs, headed by Michael J. Allen. In advance of today's legislative action, Allen and company participated in a Fentanyl Town Hall sponsored by the Colorado Springs Gazette and KKTV, and issued a release filled with photos of "fentanyl laced candy" presumably capable of luring impressionable children to their death.

The images would have been a lot more frightening had any of them originated in Colorado — which they didn't.

In conjunction with the town hall, the 4th Judicial DA's Office shared data related to drug overdoses in general, and fentanyl in particular. The figures showed a 22 percent increase in drug-related deaths from 2020 to 2021 in El Paso County, driven largely by "a more than doubling of fentanyl deaths"; they went from 47 in 2020 to 99 in 2021. In addition, the office noted that "there were two fentanyl-related suicides in 2021, bringing the total lives lost to fentanyl in our community to 101." The victims included five children — a one- year-old, a five-year-old, a fifteen-year-old and two seventeen-year-olds.

Three more fentanyl candy images shared by the 4th Judicial DA's Office.
4th Judicial District DA's Office via (left to right) wbtv.com, whio.com and ctinsider.com
The theme of danger to children — a staple of anti-drug campaigns since at least the dawn of reefer madness — is reinforced by the office's collection of images and media stories about candy infused with fentanyl. Some excerpts from the release:

In Orlando Area, Fentanyl Candy Is Not a Sweet Treat; FL man found in possession of a bag of colored candy-looking pills. Police sent the pills for testing, and the results were anything but sweet. It turns out these colorful looking pills were actually laced with fentanyl, a synthetic opioid.

2021, Athens, GA; Drug unit seizes candy laced with fentanyl during search of Athens home. The bag of more than 500 pieces of candy infused with fentanyl was recovered last week at an undisclosed location by the Northeast Georgia Drug Task Force, police Lt. Shaun Barnett said Wednesday. In this case, Barnett said the suspects melted Jolly Ranchers candy and fused it with fentanyl, then shaped it in a mold similar to gummy bears. The candy was then hardened and repackaged in the Jolly Rancher wrappers, he said.

The release highlights the reference above to Jolly Ranchers, since the company was founded in Golden back in 1949. It's the closest thing to a local hook regarding the fentanyl candies. Still, the message from the 18th Judicial District DA's Office is clear: If Colorado goes soft on fentanyl now, the state's kids are doomed.

The original version of the fentanyl bill, technically known as HB22-1326, made possession of 4 grams or less a misdemeanor. However, its sponsor, Speaker of the House Alec Garnett, has introduced an amendment lowering the threshold for a felony to 1 gram. Click to read HB22-1326 as introduced and the amendment.
KEEP WESTWORD FREE... Since we started Westword, it has been defined as the free, independent voice of Denver, and we'd like to keep it that way. With local media under siege, it's more important than ever for us to rally support behind funding our local journalism. You can help by participating in our "I Support" program, allowing us to keep offering readers access to our incisive coverage of local news, food and culture with no paywalls.
Make a one-time donation today for as little as $1.