In Five Points, Change Comes at the Community Level The historic Rossonian Hotel at 2650 Welton Street is being redeveloped. Nell Salzman
Long-term Five Points resident Candace kneels down with her daughter, Sparrow, to fill a trash bag with plastic bottles, cigarettes and other debris.

She is part of a gathering at 8 a.m. on June 3, when over forty Five Points residents came out to clean up parks and streets in the neighborhood.

“I think it’s something that we as neighbors can do,” she says through her mask. “Whatever our practicalities are about participating in protests, we can certainly come out on a Wednesday morning and help support our neighborhood."

That neighborhood has changed a lot over the years, says Oliva Omega, a representative of the Five Points Business Improvement District, which organized the cleanup effort. It's one of Denver's oldest neighborhoods, with the first people settling here in the 1870s and 1880s, when it was a streetcar suburb at the edge of town.

Over the next few decades, black professionals, artists and musicians moved into Five Points, to avoid the racism that was widespread in Denver and create their own community. “They could not go to a local doctor, or a local bank, or a local liquor store, so they had to create their own,” says Omega.

Today, though, there are far fewer black-owned businesses along the Welton Corridor, defined as a ten-block stretch along Welton Street, from 20th to 30th streets.

That's why the Five Points BID wants to stress the importance of preserving the culture and history of African-American enterprises past, present and future. Its Legacy Business Committee meets once a month to discuss ways to keep longtime businesses from leaving the neighborhood; it defines those businesses as ones that have been around at least thirty years, and contribute to the history and identity of Five Points. The BID itself is a special taxing entity that handles ongoing maintenance and promotes outreach efforts to revitalize the area and encourage more black business owners to move to Five Points.

There are currently twenty black-owned businesses on Welton, just three of them legacy businesses. 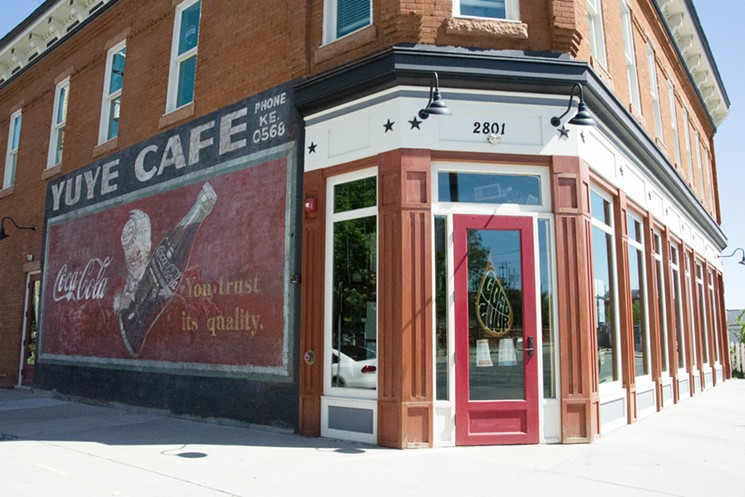 The building at 2801 Welton has been renovated, but it still has the sign for the long-gone Yuye Cafe that dates back to when Five Points was known as the "Harlem of the West."
Nell Salzman
LaSheita Sayer, chief marketing officer of ZoZo Group LLC, is leading the cleanup. “There’s not a lot of black businesses left on Welton,” she says. “I’m trying to think of who’s even left. It’s pretty sad.”

ZoZo Group is a marketing agency located in Five Points that provides professional services for publicly funded construction projects, offering outreach to the community and opportunities for public engagement. As a small-business owner during the pandemic, Sayer has faced many challenges. She recalls the immense amount of stress she felt as she quickly made decisions about how her team was going to be managed, prepped for remote work and figured out how projects could continue. During the early weeks of quarantine, she constantly asked herself how to make her company fair and equitable; she could see the divide among her own employees in education levels, skill sets and economic status.

Remote work increases that divide, she says. Many of ZoZo’s clients are people of color who work in construction and needed to leave home to work. “In their opinion, some people got to stay home. And in order to get their paycheck, they still had to come in,” she points out.

As an African-American woman business owner, Sayer recognizes how essential it is to preserve and support minority-owned businesses. “For a lot of people, if they find out or see that a business is black-owned, they may actually decide to not go there because it’s just a part of this natural training they’ve been exposed to," she says. "But supporting a black-owned business helps to support the entire minority community." 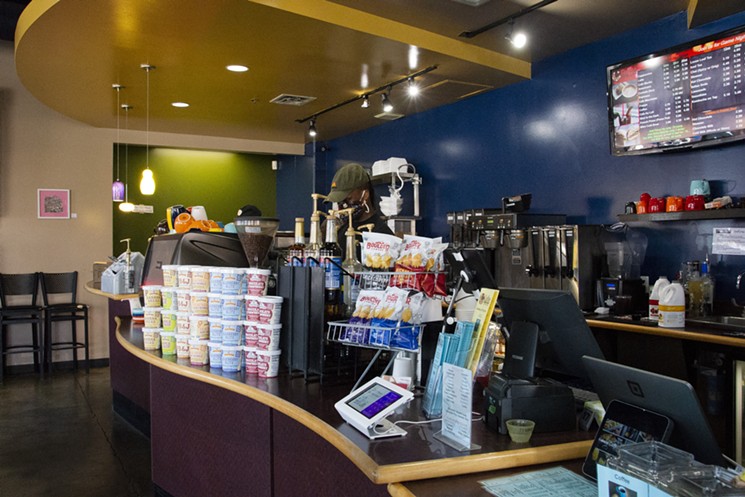 Grab a cup at Coffee at the Point.
Nell Salzman
Ryan Cobbins doesn’t want customers to come to his Coffee at the Point just because it's black-owned. Customers with that motivation drop by only every six months, he says, and in order to be sustainable, the coffee shop needs people coming in on a daily, weekly or at least monthly basis. Coffee at the Point has been in the neighborhood for a decade; during the pandemic, sales have dropped by 80 percent, he says, and his staff is now half of what it used to be.

When people come into his shop for the first time, some tell him they didn't think it was owned by a black businessperson. “I ask them what they are expecting," Cobbins says. "Are they expecting some run-down place that’s dirty? I think that part of it is having people come down to help with the perception that there are some great, quality black-owned businesses that exist."

Courtney Samuel, owner of Bodies by Perseverance, poses inside his gym at 2860 Welton Street on June 5.
Nell Salzman
Courtney Samuel, the owner of Bodies by Perseverance on Welton, has been dealing with new restrictions on gyms as well as other hurdles. He's had to limit the number of people inside the building to ten; a trainer can only work with four people. The pandemic has been particularly hard on his members, because fitness is essential to their well-being and mental health, he says. But through it all, he's remained committed to the neighborhood.

“I love it here,” he says. “Being in Five Points as a black business owner means a lot. It’s peaceful, it’s quiet, it’s changing. I think being a black owner in general is also awesome, because it allows us to create our destiny, our future. It’s special, because there’s not a lot of us. There needs to be more.”

Brother Jeff, the owner of Brother Jeff's Cultural Center, works to foster community strength and voice through visual and performing arts, celebrations and programs. Although the center itself is closed for now, it's been able to continue its community broadcasts and development work through the pandemic, because many of its programs center on services for individuals.

“I have no doubt that we’ll be all right," he says. "We’ll be resilient, and we’ll continue to survive." 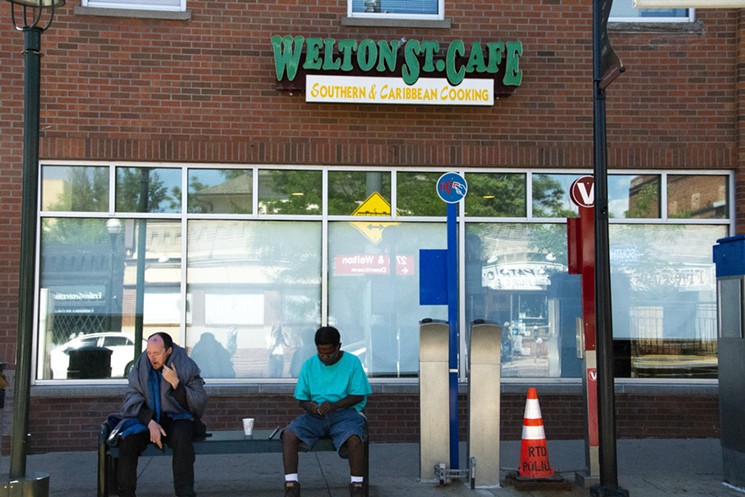 Matthew Shelton (left) and Kyle Robinson wait outside the Welton St. Cafe on June 5.
Nell Salzman
At noon, some of the neighbors take a break from the cleanup and head to the Welton St. Cafe, a popular lunch destination that's one of the legacy businesses in Five Points. Customers wearing masks line up inside the lobby to pick up their takeout orders of fried catfish, with sides of macaroni and cheese or red beans and rice. A sign on the wall notes that this is the “Home of Mona’s wings and rings.” Mona Dickerson is the mother of owner Fathima Dickerson; around Five Points, she's known as Ms. Mona.

Candace and her daughter are daily visitors to Coffee at the Point, and also frequent the Welton St. Cafe. "Best pork chops in town!” she promises.

The Five Points Business Improvement District is doing everything it can to support businesses during the tough times, Omega says. It has a COVID-19 research page on its website that's full of information on payroll protection and other resources. It's also funneling money that would have been used for events like the Five Points Jazz and Juneteenth festivals for grants that businesses can apply for; Omega says that program should be up and running later this month.

In the meantime, two community members have set up a GoFundMe to support businesses along the Welton Street Corridor, which the Five Points BID has been promoting. Grants from this project can be used to pay employees as well as rent and utility bills, and to purchase inventory and cover other expenses.

But right now, these small, minority businesses are counting on community support, from picking up trash to patronizing local shops.

"If you believe in the idea that black lives matter, then you’re extending it beyond the potential policy changes or systematic changes we need to make,” Sayer says. “You’re bringing it down to a community level. That’s where the change will come from.”

Black-Owned Businesses on the Welton Corridor: