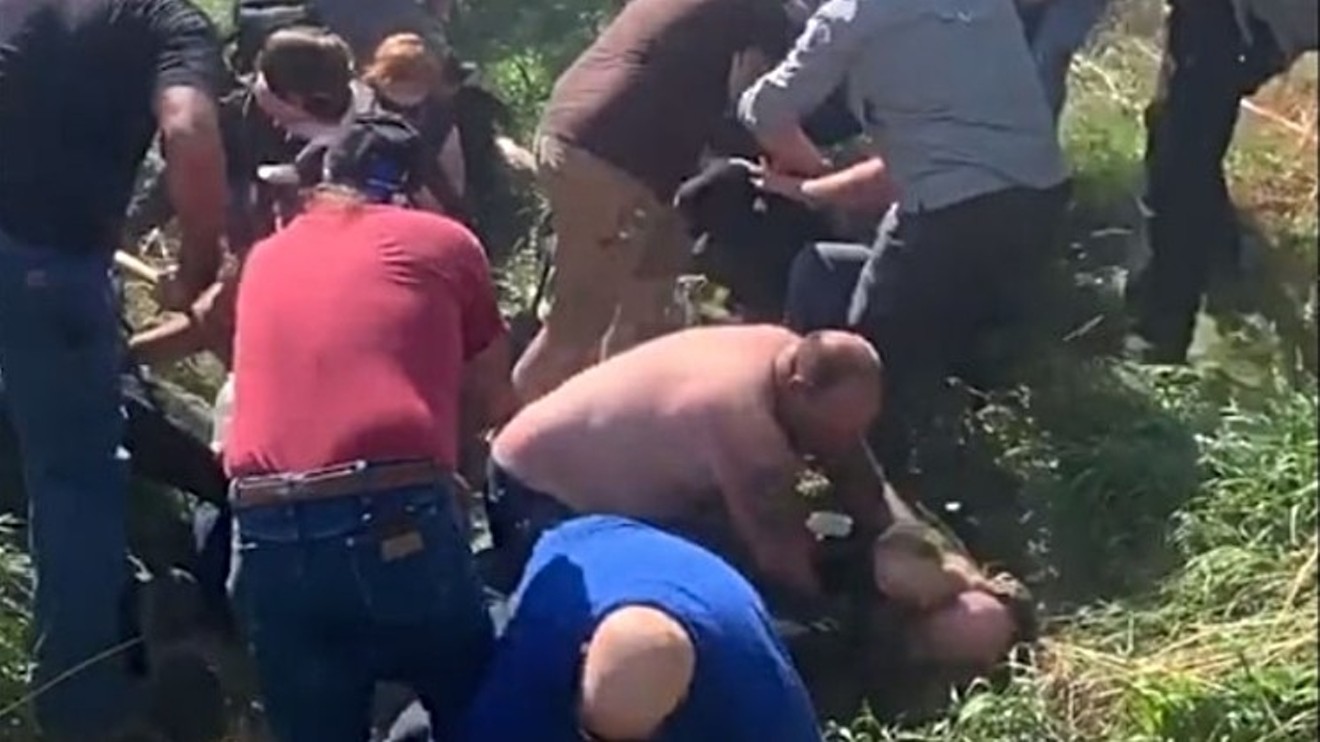 A screen capture of social media footage showing the melee in Fort Collins. @ciarawilsonn via TMZ
The Aug. 8 Medic Team, a nonpartisan group that includes LGBTQ members, racial minorities and women, claims that its members were violently attacked by pro-police forces during a so-called "Back the Blue" rally in Fort Collins this past weekend.

In a news release issued in the wee hours of August 13, the team also maintains that members of Fort Collins Police Services "did not take any action to prevent any altercations throughout the entirety of the event. They allowed demonstrators to menace and assault both counter-protesters and medics, and failed to intervene despite witnessing attempted lethal attacks with weapons and targeted hate crimes."

Video of the incident clearly shows the "Back the Blue" crew dishing out ultra-violence as bodies piled into a ditch, yet Fort Collins Police Chief Jeff Swoboda subsequently castigated "both sides" — and his take was echoed in much of the mainstream media coverage.

Meanwhile, the conservative press actively pointed the finger of blame at its usual bogeyman, Antifa, without the slightest evidence, as it did during Black Lives Matter protests in downtown Denver earlier this year. Witness The Blaze, which asserted that the whole thing started after an attack on a defenseless veteran in a wheelchair, despite plentiful visual evidence to the contrary.

The Aug. 8 Medic Team, which stresses that it "is not and never has been affiliated with any organization known as 'Antifa,'" points to a report in the Fort Collins Coloradoan that the vet in question actually "jumped out of his wheelchair into the ditch to aid a person who was being beaten by pro-police demonstrators. This is entirely contrary to claims that [he] had been pushed out of his wheelchair."

Whatever sparked the flare-up, members of the pro-cop goon squad apparently relished pounding as much flesh as possible. In footage from the clash, a man with a bullhorn can be heard crowing, "You guys came to the wrong city, boys and girls," while another attempted to act as an utterly unreasonable voice of reason when he yelled, "Everybody keep their hands off their weapons! Keep punching each other in the face. Don’t shoot anybody."

Here's a retweet of a now-deleted Instagram video taken by sixteen-year-old Ciara Wilsonn, another witness to the violence.


Another angle of the scuffle that happened yesterday when antifa went into a Colorado neighborhood. I think 3 antifa members were arrested. pic.twitter.com/iXWPMCZdeG

Following the melee, FCPS announced a criminal-tampering citation leveled against James Reitman, 42, and the busts of Anna Kruger, 25, accused of disorderly conduct and resisting arrest; Michael Townley, 42, charged with disorderly conduct; and Joshua Mischler-DeLeon, taken into custody for disorderly conduct and possession of an illegal weapon. Since then, the agency has cuffed two more people, identified by 9News as Michael Oropeza and Brian Wooley. Both face disorderly-conduct beefs, and a team spokesperson alleges that they were "were among those who attacked medics and counter protesters."

The Aug. 8 Medic Team names two other individuals who allegedly took part in the melee and asks FCPS and Colorado Attorney General Phil Weiser to "open an investigation" into their behavior and that of "all others who participated in this attack, for their violent assaults and hate crimes against nonpartisan medics, all of whom are variously members of the LGBTQ community, racial minorities and young women."

We're not identifying the men because they have not been formally accused of any crimes, but the team says they're members of III Percent United Patriots, an affiliate of the III Percent militia movement also known as the Three Percenters, identified as a hate group by the Anti-Defamation League. Westword offered details on the group in a 2018 post about Denver Police Officer Michael Traudt, who had the Three Percenters logo tattooed on one hand. Traudt, who pulled the trigger in the controversial 2015 killing of Native American Paul Castaway, insisted that he wasn't a member of the organization, and the Denver Police Department ultimately decided against disciplining him, though he was asked to cover the tattoo while on duty.

As for the Aug. 8 Medic Team, its members "categorically reject" Chief Swoboda's "both sides" description and offer a vivid account of what they witnessed amid the brawl. "All of the medics were clearly marked with multiple Red Crosses, and none were armed," the narrative emphasizes. "Medics were instead confronted and surrounded by 'pro-police groups,' and were subsequently attacked and violently assaulted by this group. The attackers used various weapons, including clubs, poles, and bicycle chains to strike the medics, including multiple attacks aimed at medics’ heads. They also hurled racial and sexual epithets and slurs whilst violently attacking the medics, constituting a hate crime."

According to the team, the medics "entered the event with the purpose of providing medical support and assistance to all those present, including BOTH ‘Back the Blue’ ralliers and counter-protesters, as well as to safely escort counter-protesters out of the event and into their cars. Immediately upon arrival, the medics were surrounded, physically blocked from providing medical assistance to injured individuals, verbally and physically assaulted, and called racial and sexual slurs. Despite this, medics still offered water, masks and medical assistance to those surrounding them. Once the ‘Back the Blue’ attendees decided to allow the medics to move away from the rally, they pursued and attempted to surround the group. The medics were shoved, threatened and continuously insulted on the basis of race, gender and sexual orientation."

After the medics were several blocks away from the event, the release continues, "they were attacked,
unprovoked, by several instigators from the ‘Back the Blue’ Rally. The medics were punched, beaten with batons and other blunt weapons, and put into chokeholds, sustaining severe injuries to the head and body." Yet the "Fort Collins Police officers prevented clearly identifiable medics from providing treatment to a patient with major trauma in a public park, at a time when there was no risk of an altercation," it notes. "FCPD notably did not take any action to prevent other altercations throughout the entirety of the event, instead choosing to let demonstrators menace and assault both counter-protesters and medics."


Community members have gathered for numerous demonstrations outside of the FCPS building this year. Consistent with previous gatherings, area officers were available in case law enforcement assistance was needed on August 8. As soon as officers were made aware of the disturbance in the neighborhood to the west of our building, they responded and arrived on scene quickly. Officers worked to contact the individuals directly involved in these disturbances; however, some left the area before police arrived.

We have an active and ongoing investigation into this incident. We are asking people to contact police if they have any information about the people who were physically fighting or the events leading up to the disturbance. We strongly encourage this group to contact detectives directly to report these concerns to aid in the investigation.

We respect everyone's right to peacefully assemble to make their voices heard. For the safety of our community, acts of violence, destruction of property, and other unlawful behavior will not be tolerated from any individual or group, regardless of their ideology.

This post has been updated to clarify that the Aug. 8 Medic Team's membership isn't exclusively female, and to add information about the most recent pair of arrestees, as well as to include a statement from Fort Collins Police Services.
KEEP WESTWORD FREE... Since we started Westword, it has been defined as the free, independent voice of Denver, and we'd like to keep it that way. With local media under siege, it's more important than ever for us to rally support behind funding our local journalism. You can help by participating in our "I Support" program, allowing us to keep offering readers access to our incisive coverage of local news, food and culture with no paywalls.
Make a one-time donation today for as little as $1.