The French Bulldog Hoarder Was My Neighbor! 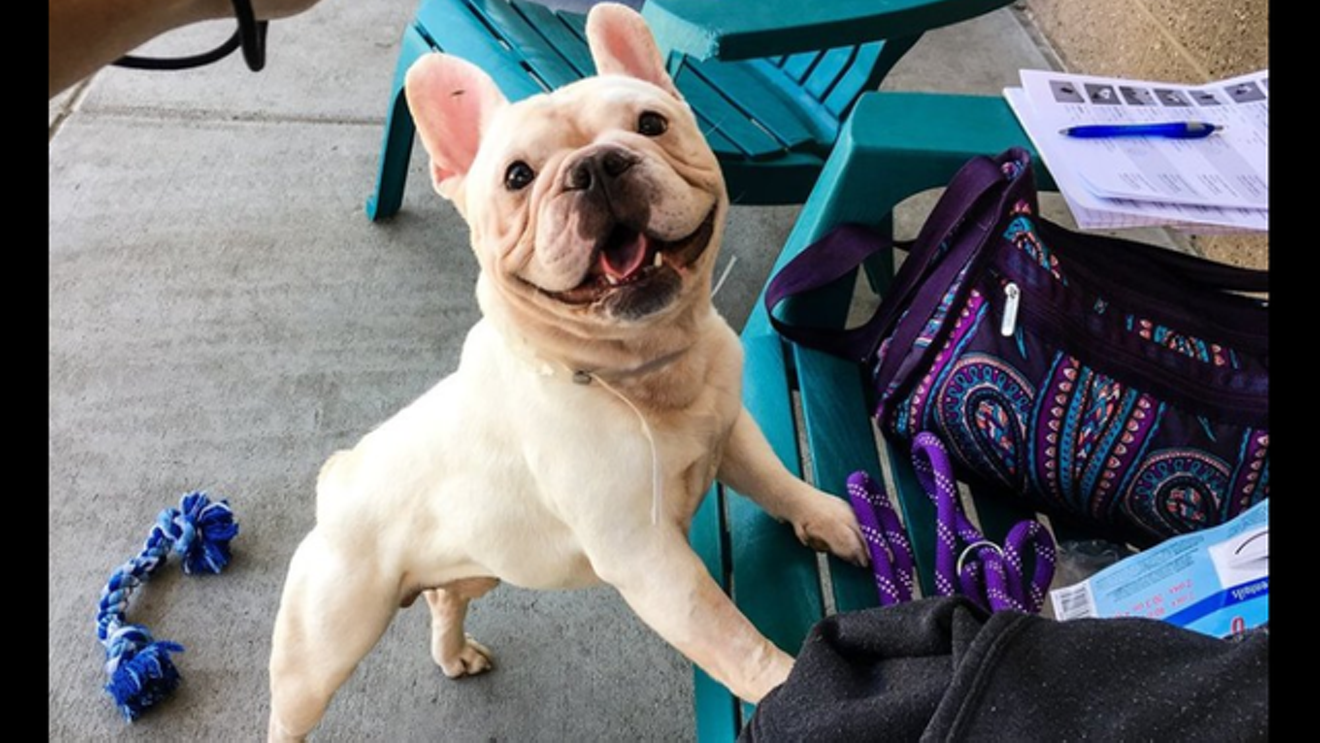 Denver Animal Shelter
In 2008, I got married and moved into a house in the quiet Harvey Park neighborhood in southwest Denver. One of the neighbors on my block was an odd woman with a penchant for French bulldogs; she had a few too many to be on the legal side of dog ownership in Denver, but they were small and quiet, and I didn't think much of it. At the time, she had six dogs.

That was nine years ago, and that neighbor, Marleen Puzak, is now facing charges of 35 counts of cruelty to animals and twelve counts of felony aggravated cruelty to animals. Last month, police investigators and Denver Animal Protection officers found 35 dogs living inside Puzak's house and another twelve canine carcasses stored in two freezers. According to the arrest affidavit, the discovery was made after a complaint in early July from a friend of Puzak's stating that she'd noticed the "odor of feces and urine on Ms. Puzak's person, her dogs, and her car" when meeting her at a nearby park.

That was not the first complaint made to the city about problems arising from Puzak's growing hoard of dogs, though. In 2014 and again in 2015, my wife and I had called 311 about the property on our block where a large number of dogs could be seen in the back yard on occasion, and where a foul stench emanated from the house itself. The first call three years ago was because of the odor. We told 311 that we assumed the odor was caused by the dogs but we didn't know because we had never been inside the house and we didn't know exactly how many dogs Puzak had, though we suspected it was around nine or ten.

Over that winter the smell diminished, but in the summer of 2015, the stench rose again and could often be smelled from several houses away, including in our back yard. While on my roof doing some evaporative-cooler maintenance, I was able to see into Puzak's back yard and counted fifteen to eighteen dogs; they weren't often outside all at once, and I was stunned by the number of animals, most of which were French bulldogs. We called the city again, and they told us that an Animal Protection officer would make a visit. I also went and talked to Puzak directly and told her that her situation was affecting her neighbors and that it was also probably unhealthy for her and her dogs. She told me that she worked with MaxFund, and I replied that since it was a no-kill shelter, it would be a great place to take her dogs so that they could receive care and be adopted out to new homes.

An Animal Protection officer did apparently come out and talk to Puzak at that time but was unable to enter her house since the officer didn't have a search warrant and she refused admittance. Around then, Puzak also informed me that she had gotten rid of all of the dogs except three. That was the last contact I had with her, and the last I saw of her dogs. 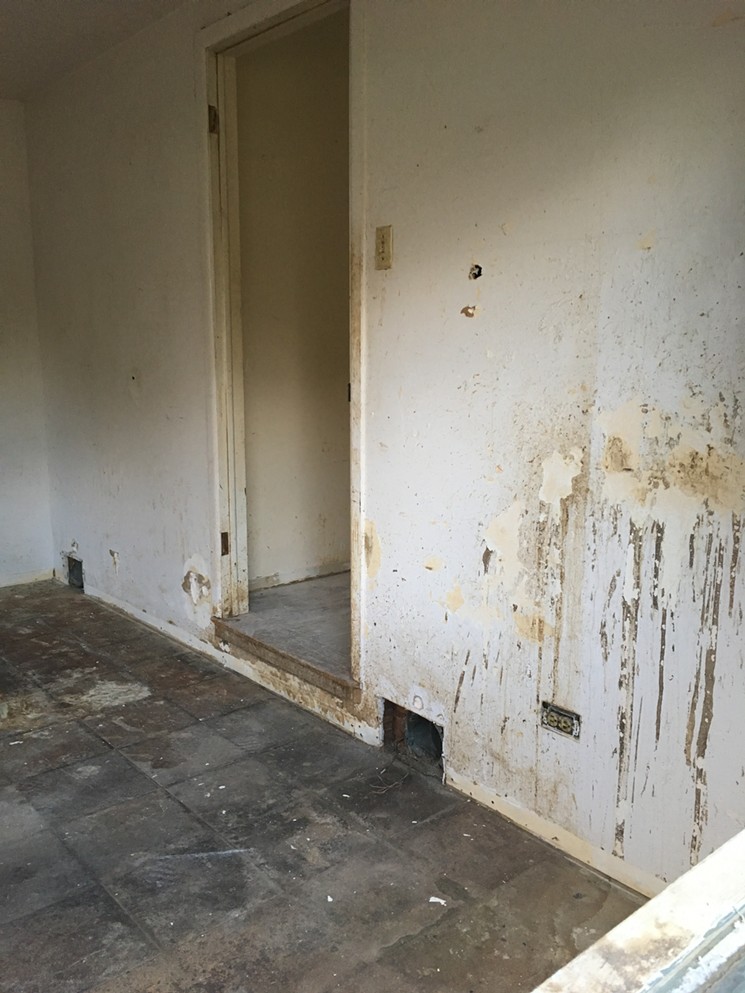 The windows have been removed from the house, so it's easy to see the damage inside.
Mark Antonation
As it turns out, she did not get rid of the dogs, but kept collecting them — never letting any out of her house— under the guise of providing a foster situation until permanent homes could be found.

In the years between our first call to the city and Puzak's arrest, animals died and suffered. So did someone drop the ball too soon? Was I not forceful or frequent enough with my complaints? Was it wrong of me to assume that other neighbors were also complaining?

I feel guilty for not following up, and I feel angry that the city didn't recognize a horrible situation sooner, but ultimately the blame lies with the hoarder. So here's what I would do differently: I would skip the next call to 311 and instead call the police immediately, and I would not soft-pedal anything. If they asked about the smell coming from the house, I would tell them that it's what I imagine a rotting corpse would smell like. I would tell them that the quiet whining and muffled barks I sometimes heard from the house (French bulldogs don't make much noise; I often joked that they sounded more like ducks than dogs) were cries of pain and distress. I would tell them I thought something evil was happening there.

Of the 35 living canines pulled from the miserable conditions of the house, several had to be euthanized and two dozen are now being cared for at the Denver Animal Shelter. The shelter is holding a French bulldog adoption event today, August 26, and the crowd is expected to be large. The breed is popular, and a dog often sells for $2,500 or more; the shelter is asking only for a $400 adoption fee. That's a little higher than the $150 normally charged, but the city isn't profiteering from this event. Because of the additional care and medical attention (including the surgery) that the dogs needed (and that some continue to require), the shelter isn't exactly reaping the same gains as a registered breeder. The home of a south Denver dog hoarder is being gutted.
Mark Antonation
My advice for hopeful French bulldog parents: Don't go. There are only 24 of the dogs, and hundreds of people will probably show up. Don't say, "They're so cute — I want to take them all home!" Don't think these diminutive canines are just little clowns waiting to fill your life with joy. Dog ownership is a responsibility, and if you're balking at $400, think about what you would do if your new companion were to require surgery or regular medication. Think about what you would do if you decide to have kids and your dog no longer fits your idea of a happy family. Think about the care that older dogs need and the training that puppies require. Many of the French bulldogs awaiting adoption are already elderly or have ongoing medical needs. Are you prepared to deal with that, or with behavioral issues that might result from the neglect and abuse they've already suffered?

Pet ownership is a lifetime responsibility, and many people aren't willing to deal with the difficult side, instead returning the problem dog or cat to the shelter, giving the animal up to a rescue organization or pawning it off on friends, family or neighbors. That's partly how Marleen Puzak was able to amass so many dogs herself: She played on people's emotions and said she'd be able to care for the dogs or find them new homes. She worked with rescue organizations, breeders and shelters and convinced them she was on their side.

Even now, people are defending her or downplaying her actions. A breeder of one of the animals taken from Puzak's home started a GoFundMe campaign to get her dog back, describing the hoarder as nothing more than "a person that loved the dogs and was in the process of moving to a large county property with kennel space."

That was never going to happen, and if it did, it would have just given a mentally ill woman more space to hide her behavior. There are other Marleen Puzaks out there. I'm saddened that this hoarder wasn't identified and stopped sooner, but fewer dogs will have to suffer because her story is now out there, too.