Some of Puzak's dogs were put up for adoption. Denver Animal Shelter
Brandon Gossett walked into the home and smelled urine. He heard cleaners had found a dead cat and a dead dog somewhere in the house. The place was gross, no doubt, but the real estate agent had seen worse in his career.

Given ten minutes by the real estate agent in charge to make a decision — "It was one of those deals where we didn't get to do due diligence," he says — Gossett quickly decided to buy the home at 2125 South Irving Street, flip it and put it on the market at $314,900. The fast nature of the deal wasn't unusual, especially in Denver, where affordable property is increasingly hard to come by and even sellers with less-than-desirable homes have the upper hand.

Nor is it unusual that the seller hadn't told Gossett what had gone on at the home under the previous owner, a story Gossett heard only when I called him this week to ask about the property.

In July, Denver Police Department and Animal Protection officers had found 47 dogs at 2125 South Irving, 35 alive and 12 dead, stored in the freezer. Marleen Puzak, the home's then-owner, was charged with 35 counts of cruelty to animals and twelve counts of felony aggravated cruelty to animals.

But Puzak had no duty to disclose those details when she sold the house, nor did her agent. 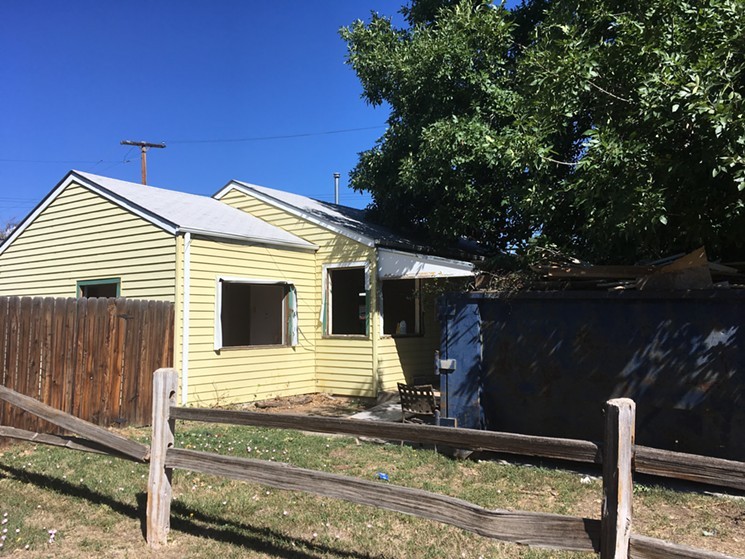 The home before Gossett purchased it.
Mark Antonation
"There is no one list of what all one discloses in a real estate transaction," writes Gary Kujawski, communication and policy manager at the Colorado Department of Regulatory Agencies, in an email. "The Buy/Sell contract has many disclosure obligations, and both the Seller and the Seller's broker have obligations pursuant to the contract. Oftentimes, it comes down to what one knows or obviously should have known, as well as adverse material facts."

After taking on the property, Gossett remodeled most of the home's interior, replacing cabinets and the HVAC, electrical and plumbing systems; he also painted the place.

The house was on the market for two weeks, which Gossett admits is a long time in Denver's real estate market. But now it's under contract.

Gossett says there wasn't enough time to look into the property, and he doesn't blame the real estate agent who sold him the home for not telling him its history. But in a parallel universe where Gossett had known about the animal cruelty, would he have done anything differently? "The place was gross," he says. "Even if there was animal cruelty going on, we knew well enough that this place needed new everything, and it got new everything."

Kujawski says potential home buyers have options if they believe they were misinformed about a property.

"If the person affected believes that certain disclosures have not been made, they should file a complaint against the broker, or they always have an option for a civil remedy with the courts — probably contact an attorney," he says.