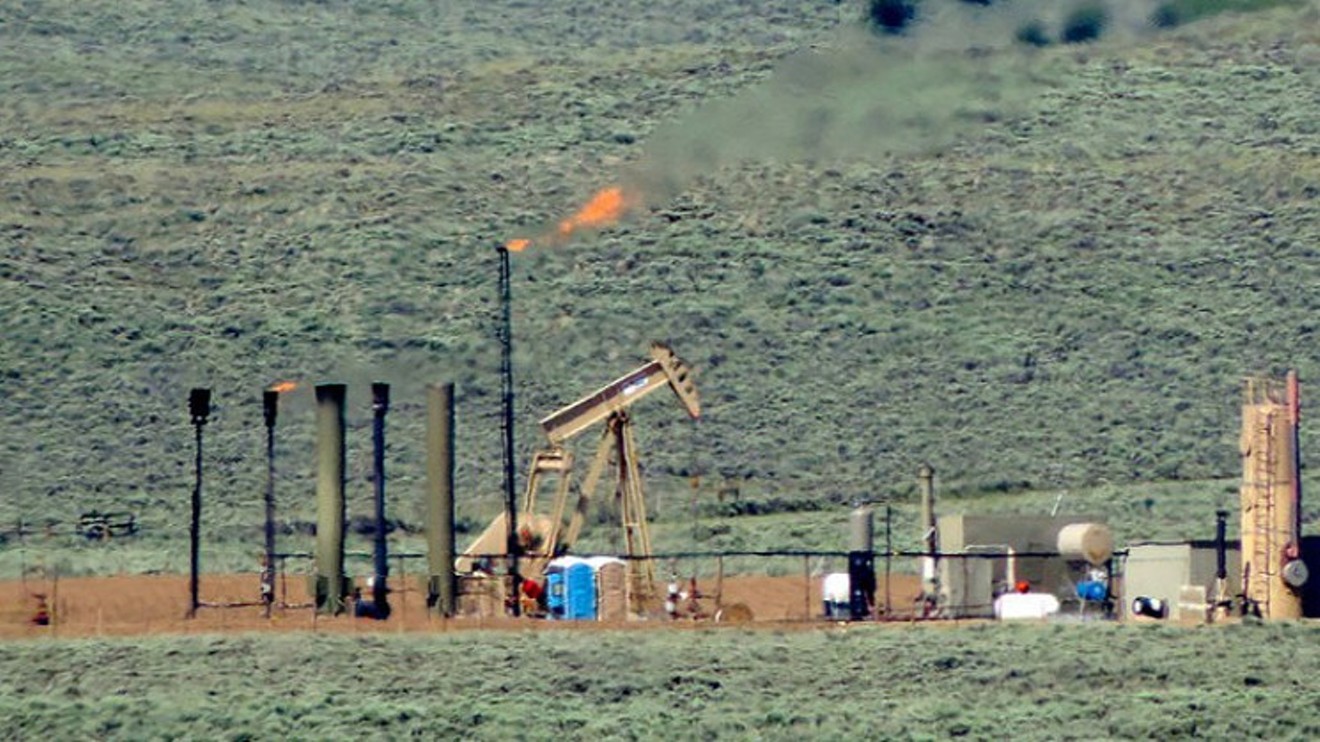 A proposed moratorium on new oil and gas drilling in Broomfield was killed last week. Courtesy of WildEarth Guradians
Last week's 6-3 vote by the Broomfield City Council to "postpone indefinitely" any action on a proposed moratorium on oil and gas drilling, despite widespread support for such a measure, has left neighborhood organizers puzzling over their next move in the local fracking wars. To some, the five-month hiatus on new rigs was an important option to keep on the table — and a vital bit of leverage in ongoing negotiations with Extraction Oil & Gas, which has been seeking to drill up to 139 wells at four sites near residential areas.

The decision came after Extraction officials pledged to withdraw their current permit application and retool their plans before once again seeking state approval. The move has been portrayed as a compromise, but not everyone sees it that way; an indefinite postponement of the moratorium, notes councilmember Kevin Kreeger, is the same as a "no" vote. "If we want to bring it back, we have to start anew," he says. "This moratorium was killed on Tuesday."

"It's a victory for Extraction, not the residents," says Ann Marie Byers, chair of the Wildgrass Oil and Gas Committee, a neighborhood group.

County and municipal officials have been treading cautiously when dealing with fracking operations, uncertain over how much local control can be exerted, in the wake of Colorado Supreme Court decisions overturning a long-term moratorium in Fort Collins and an outright ban in Longmont. Recently, Colorado Attorney General Cynthia Coffman filed a lawsuit against Boulder County, too, claiming that its long-running moratorium on new rigs usurps the authority of the Colorado Oil and Gas Conservation Commission to oversee drilling operations. But Kreeger says he doesn't believe those legal battles had any real influence on the Broomfield decision.

"What the Supreme Court ruled on was a five-year moratorium in Fort Collins and a permanent ban in Longmont," he says. "Our moratorium would have been for roughly six months. In my personal opinion, the courts would uphold it."

Extraction's proposed 139 well pads superimposed on a Google Earth map.
broomfieldcleanairandwater.org
Extraction officials indicated they would work on a new permit application to be submitted to the COGCC in May, with drilling expected to commence next year. Byers says the company has made various assurances of modifications in the plan to address residents' concerns about emissions, spills, noise and other issues, but no commitment in writing. That's a sore point, since the previous plan called for as many as 42 wells at one site, in relatively close proximity to schools and housing.

Byers says that residents are seeking a "closed loop system" in order to minimize the possibility of air and water contamination, including a pipeline. "Extraction says there will be one, but they made the same representation at Triple Creek," she says, referring to a drilling project in a west Greeley neighborhood that received state approval last fall. "When it came down to starting the project, they said it was not economical any more to have a pipeline. What we want is a contract that says there will be a pipeline in place before drilling; we still don't have that in writing."

At this stage, councilmembers have no clear indication of how Extraction's new application will differ from the old one. "It could be the same number of wells, just distributed differently," Kreeger notes. "It could be more or less wells. We just don't know."

Kreeger says the city needs time to develop guidelines about oil and gas development  in its comprehensive plan, "based on sound data" concerning the impacts of drilling on surrounding properties and residents. The city has appointed a twelve-member task force to update the comprehensive plan so that it addresses issues such as to where drill rigs can be placed and at what scale, but the timetable for completing such a task has no coordination at present with Extraction's plans.

"We want some real data-driven facts about what is safe for this project," Byers says. "But [Extraction] isn't waiting for this task force we put together to give them any input on their new plans. They don't expect to take those recommendations into account at all."

Byers says another option which residents are pursuing would involve petitioning the COGCC for rulemaking changes, since "the current set of rules didn't contemplate this sort of large-scale industrial development near residential areas."