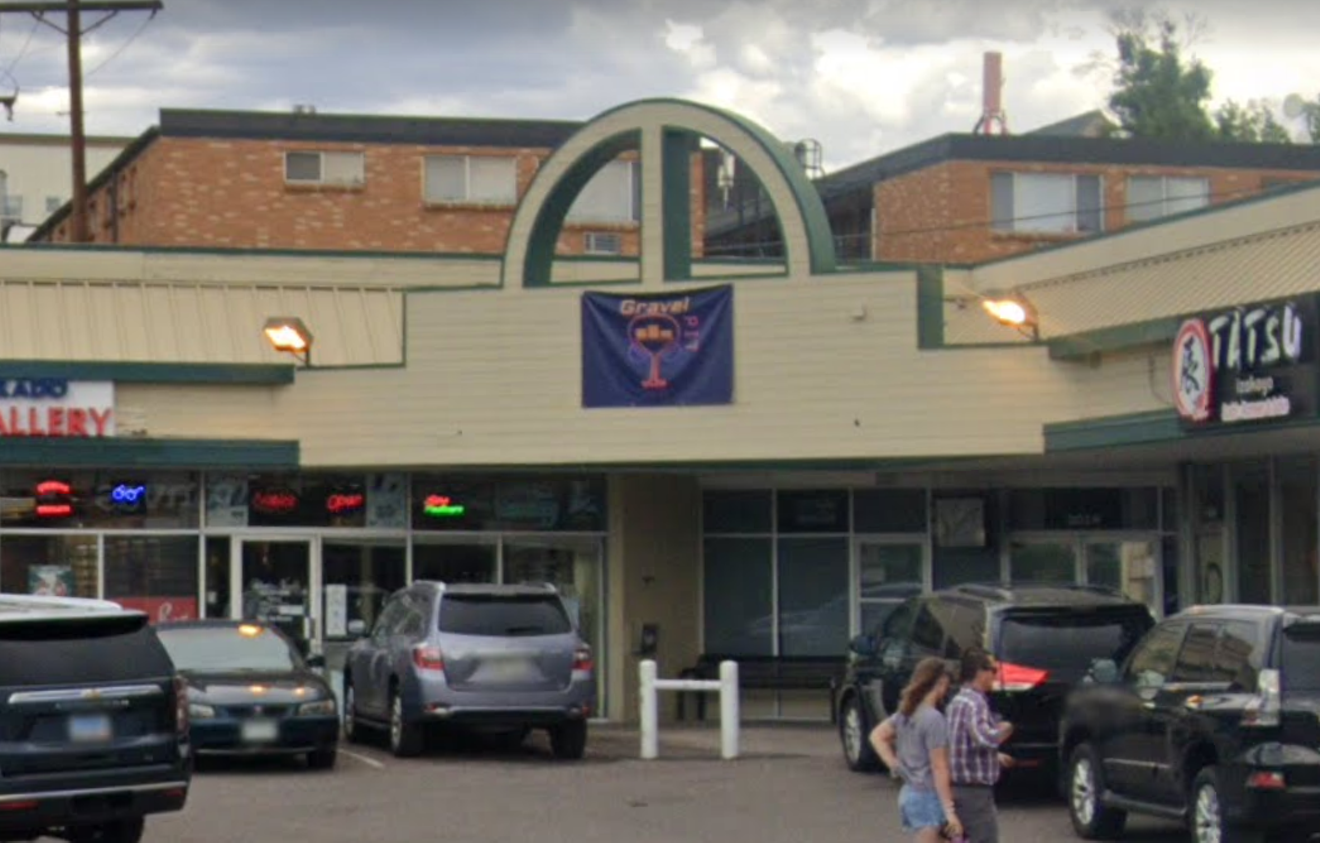 Gravel Pit is facing liquor-licensing action. Google Maps
Gravel Pit, a bar and music venue located at 2014 South University Boulevard, near the University of Denver, has been dinged for a third alleged liquor-license violation in less than two years of operation — when it moved into a space formerly occupied by a club run by Jay Bianchi, whose Grateful Dead-themed spots have also run into trouble with the city.

On October 16, the Department of Excise and Licenses notified Gravel Pit of a potential liquor-licensing action. Formally known as an order to show cause, the notice states that on the night of September 23, an eighteen-year-old Denver Police Department cadet and an undercover DPD officer paid a $30 cover to enter the premises before being asked for their IDs by the doorman. The cadet presented her Colorado driver's license, which showed that she was under the age of 21.

According to the order, "Realizing the cadet was underage, the doorman told her, 'I won’t say anything if you don’t.' The two were then allowed to enter the establishment."

Once inside, the cadet ordered two bottles of Bud Light at the bar. The bartender handed over the beers, which were paid for in cash, without asking for ID, the order claims.

Gravel Pit has had two previous run-ins with the Department of Excise and Licenses. It's owned by Kofi Ansong, who did not respond to a request for comment.

In June 2021, Alexandra Spencer, an undercover DPD officer with the vice team, entered Gravel Pit with an underage cadet. (That month, Spencer also visited Beta Event Center as part of the DPD's undercover investigation into the LoDo venue, which ultimately resulted in the club's closure.) According to a past order to show cause, once they were inside Gravel Pit, the bartender asked Spencer and the cadet if they would like anything to drink. The cadet then ordered two Coors Banquet draft beers, which the cadet paid for in cash.

Following that transaction, a Denver police detective immediately entered and served a summons for serving alcohol to an underage person. The bartender then asked Spencer and the cadet for their IDs, saying he had forgotten to do so; upon discovering that the cadet's ID stated she was under 21, the bartender said that he would need to take back the beer.

After receiving a show-cause order in connection with that incident, Gravel Pit struck a settlement agreement with the Department of Excise and Licenses in October 2021: The bar would close for sixteen days and also have an additional forty-day closure held in abeyance for a year, conditional on no further liquor-code violations.

But at approximately 2:25 a.m. on August 13, after bars are supposed to be closed to patrons, the DPD's vice team conducted a "license compliance investigation" at Gravel Pit. Entering the bar, a DPD detective reportedly "observed a DJ performing live music and patrons of the establishment dancing on the dance floor." The detective also "observed a bottle of Corona beer displayed on the bar."

On September 15, the Department of Excise and Licenses sent another show-cause order to Ansong, this time for "unlawful display of liquor" and "time limits for entertainment." A hearing on that order has been postponed.

And now Gravel Pit is facing its third show-cause order, this one regarding the September 23 incident. That hearing is set for November 22.

Given the terms of the previous settlement agreement, Gravel Pit could be facing a forty-day closure...at the very least. In a worst-case scenario, Gravel Pit could lose its dance cabaret, underage patron cabaret, and hotel and restaurant liquor licenses.

The previous tenant of the space, Quixote's True Blue, closed in early 2021.
Jon Solomon
Before it was home to Gravel Pit, the building held Quixote's True Blue, a bar and music venue owned by Bianchi, who shut down Quixote's in early 2021 because of COVID-related violations. That was the year he said he was retiring from the bar business and transferred ownership of two other bars: So Many Roads Brewery, at 918 West First Avenue, and Sancho's Broken Arrow, at 741 East Colfax Avenue.

So Many Roads is closed for the month of November because of violations, and Sancho's Broken Arrow closed for good last month. The city wants to declare the Sancho's property a public nuisance; the owner faces a trial in that case on December 6.
KEEP WESTWORD FREE... Since we started Westword, it has been defined as the free, independent voice of Denver, and we'd like to keep it that way. With local media under siege, it's more important than ever for us to rally support behind funding our local journalism. You can help by participating in our "I Support" program, allowing us to keep offering readers access to our incisive coverage of local news, food and culture with no paywalls.
Make a one-time donation today for as little as $1.