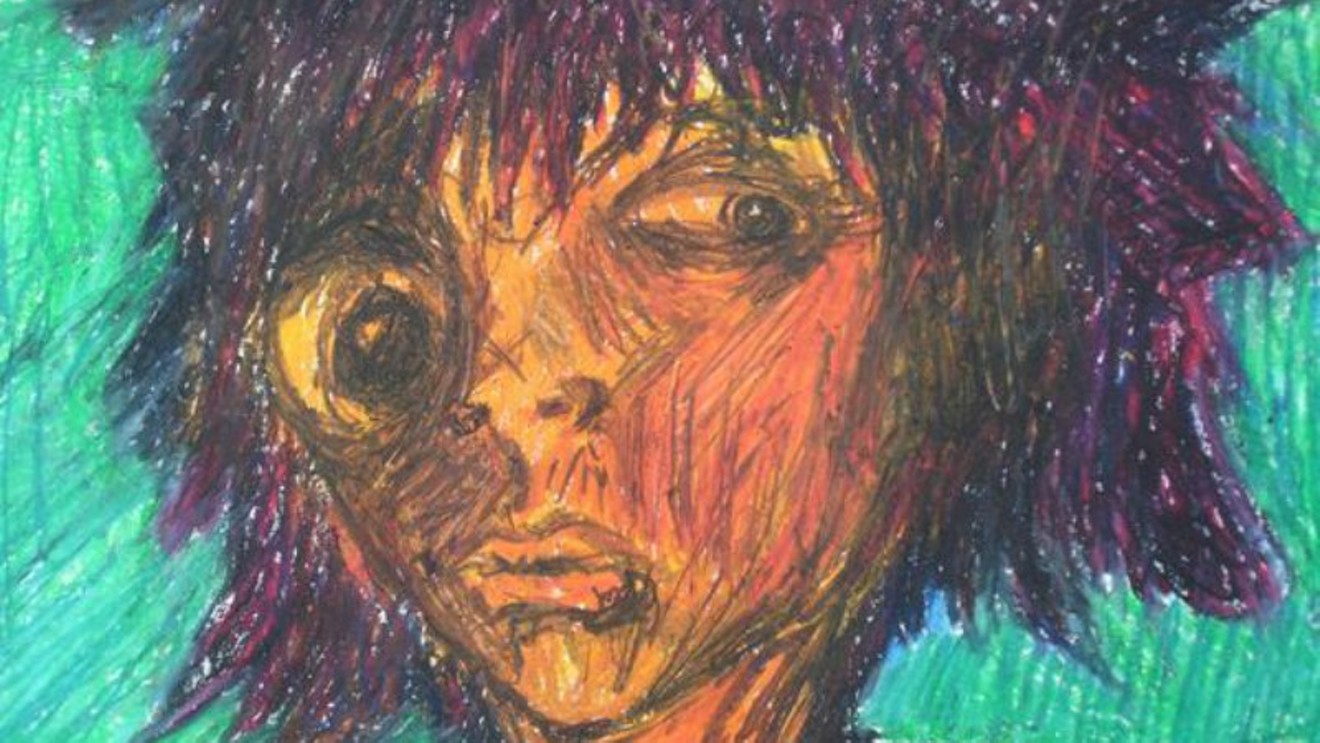 An illustration on Nic Sheff's Facebook page. His books include Tweak and We All Fall Down. Facebook
The number of deaths in Colorado related to heroin and other opioids have skyrocketed of late, with the recent fatal overdoses of celebrity sons Eric Bolling Jr. and Max Barry in the Denver-Boulder area underscoring the magnitude of the situation. Against this backdrop, author David Sheff and his son Nic Sheff, the respective author and subject of Beautiful Boy, a best-selling book about Nic's addiction to methamphetamines, will co-headline a fundraising event for Arapahoe House, one of the state's largest drug-and-alcohol rehabilitation centers, on Wednesday, September 27; get the details below. In advance of the appearance, David spoke with Westword about his personal experiences and the challenge of making progress on such a vexing issue.

"I didn't think the problem could get worse," David admits. "But it's gotten worse and worse and worse to the point that suddenly, overdose is the number-one killer of people under fifty in this country. It's unthinkable: 175 people a day dying, and every one of them has a family that says, 'This can't happen to me. Not my kid or my wife or my husband or my parent. No way.'"

Twenty years ago or so, when Nic's downward spiral started, David was a successful journalist; he's written for publications such as the New York Times and Rolling Stone, and his interview subjects include John Lennon and Steve Jobs. What followed was "ten years of watching Nic's addiction," he says. "It almost killed him. He almost lost his arm. We were on a roller coaster of hope and then despair. He was a perfect kid: a great student, an athlete, a college student. So I got a harsh hit of reality."

It wouldn't be his last one. After the 2008 publication of Beautiful Boy, which is slated to be made into a movie by Brad Pitt's Plan B Productions co-starring Steve Carrell, Maura Tierney and Amy Ryan, Nic "relapsed," David notes. "But he got back into recovery, and he's been clean for about seven years." Nic has also written two memoirs of his own: Tweak and We All Fall Down. 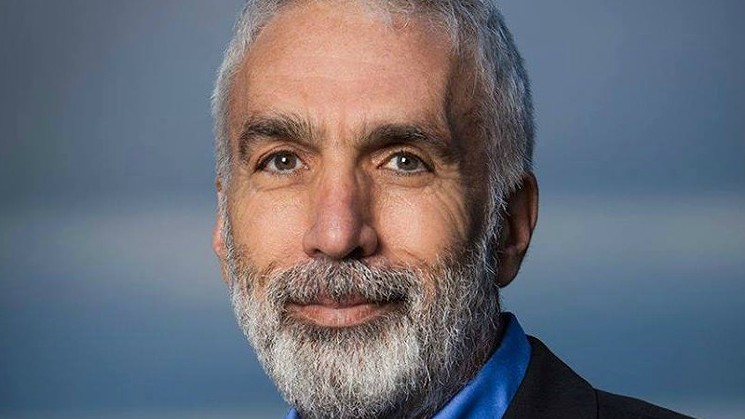 David Sheff is the author of Beautiful Boy and Clean.
Facebook
As for David, he followed up Beautiful Boy with the aptly named Clean, a 2013 book subtitled "Overcoming Addiction and Ending America’s Greatest Tragedy."

"I dove back into research," he recalls. "I wanted to learn everything I could about addiction — why they call it a brain disease and why we were so ineffective in treating it. And at that time, I was very optimistic. I felt things really were shifting because of attention to the problem, and because science was telling us so much more about what this disease was and how to treat it. People were talking about it more, and it wasn't being hidden as much because of this stigma that addicts were weak-willed. That's why I ended the book on a positive note. I just felt things were going to get better, because it was inconceivable that they'd get worse."

He was wrong. "The kinds of letters I've been getting since Beautiful Boy came out I get even more of now," he reveals, "and the stories are as bleak as anything. Every day that I open my email, I know there's going to be something heartbreaking in there. They've made me realize how lucky we were, even after everything we've been through — because my son survived, and so many people don't. It's hard to find someone who did as many drugs for as long and in such dangerous combinations as Nic — spending years going to Oakland and finding abandoned warehouses, getting beaten up, getting threatened by a guy with a crossbow. By all accounts, he shouldn't have made it, but he did."

What's different now than during Nic's first crisis? "In older days, it wasn't uncommon for people to take a course like Nic: They'd start smoking pot in high school and then go from one thing to another until they started doing crystal meth or heroin," David says. "But today, kids who aren't even doing drugs may have an injury in school or doing sports and get pain pills like Oxycontin. Or it happens to somebody they know, and their friend has these pills and they try one and think, 'This is amazing,' and do it again."

Not that prescription meds are public enemy number one at present. "For a while, people were dying because of pain pills, but that's been surpassed by heroin," he goes on. "Kids tell me that if you want to buy one Oxycontin pill at a high school campus, it's $40, but if you want to get heroin, it's $5 or $10 — which is why kids who probably never would have started shooting heroin are doing it now." 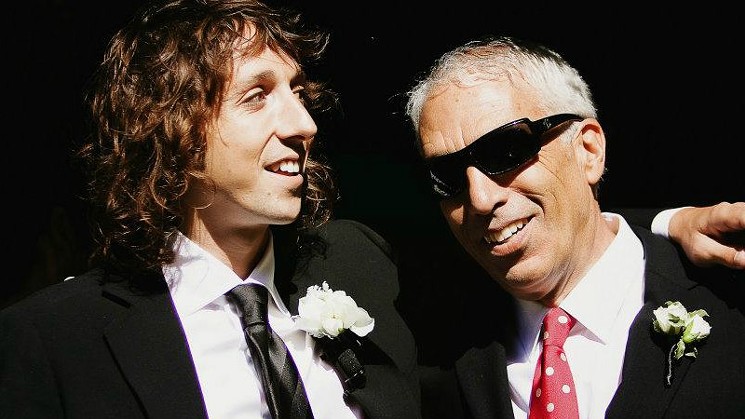 Nic and David Sheff in a 2012 photo shared on Facebook.
Facebook
That's not to mention fentanyl, "which is 100 times stronger than heroin, and carfentanil, which can kill you with an amount smaller than a snowflake," David points out. "You'd think it would be easier to get prescription medications, but once you've exhausted your home medicine cabinets and you can't steal them from your friends, you find out it's not as easy to get as it used to be, because doctors are getting more educated and don't dispense them the way they once did. And it's easy to get street drugs. All you have to do is find somebody, and once you do that, you can have a limitless supply — and that's another reason why it's so dangerous. There are seasoned heroin addicts who sort of know what they're doing. But you also have people who don't really understand that world and don't realize that you have to increase your tolerance over the years. Then they go from heroin to fentanyl and take too much...."

The prevalence of such scenarios could easily lead to despair. But amid the gloom, David still sees positive signs. He's happy, for example, that the Affordable Care Act, popularly known as Obamacare, has made it infinitely easier for people to get insurance coverage to treat addiction — and he's hopeful that this improvement will survive unless "the system is completely dismantled." He's also pleased that more police departments and first responders are deploying Narcan, a medication that can reverse the effects of an overdose and literally save lives, and he applauds the expanded use of Suboxone, which he says gives opioid addicts "a 77 to 90 percent chance of staying clean. We've never had those kinds of statistics before."

Likewise, David salutes the rise of "grassroots organizations across the country that are going to schools and officials and saying, 'We can't pretend this isn't happening anymore. It is happening, and it's happening to us.' That's the reason we're seeing more about this in newspapers, and we're seeing governors and even our president, sort of, talking about it."

"Building Beautiful Families: How to Face Addiction Together" with David and Nic Sheff gets under way at 12 p.m. Wednesday, September 27, in the Seawell Ballroom at the Denver Center for the Performing Arts, with a book signing to follow at 1:15 p.m. Get more details on the 8th Annual Arapahoe House Luncheon Facebook event page.