Holly Lynn Moore turned nineteen shortly before her death in 2015. Facebook
The mystery surrounding the death of Holly Lynn Moore, a nineteen-year-old college student found hanging in a closet in her Castle Rock apartment on March 6, 2015, just keeps getting deeper. Family members have spent months and thousands of dollars uncovering evidence that suggests Moore's death wasn't the suicide that it appears to be.

But the greatest mystery of all may be the utter lack of curiosity about those findings on the part of  Castle Rock police and the Douglas County Coroner's Office, which continue to maintain that Moore took her own life.

After Fox31 did a series of stories about the case, Castle Rock police chief Jack Caule agreed to allow the Colorado Bureau of Investigation to conduct further tests on the evidence gathered at the crime scene. But Moore's family says the CBI has done little additional investigation in subsequent months. "There's been a lot of hemming and hawing," says Moore's cousin, Sandi Bray.

A recent seven-minute piece about Moore on the Discovery ID channel has attracted nearly a million page views, Bray adds, and the family is working with other media outlets to generate additional attention — and offering a $50,000 reward for information on the Justice for Holly Moore Facebook page — as the second anniversary of Moore's death approaches, in an effort to prod authorities to take another look at the case. "They won't say they're investigating, but they won't say it's closed, either," says Bray.

Castle Rock detectives say the "totality of the evidence" points to suicide. A busy freshman at University of Colorado Denver, Moore was also helping to care for her quadriplegic mother in her battle with multiple sclerosis. She was on antidepressants, and the crime scene was clean and orderly, giving no indication of a violent struggle.

But Moore's father and sister say the apartment's exceptional tidiness appears to be the work of someone other than Moore. And in the weeks leading up to her death, they add, she'd had several confrontations with an abusive ex-boyfriend, who had been observed on at least two occasions choking her. Holly's sister April filed for a restraining order against the ex because of alleged threats, and a threatening message from him was found on Moore's voicemail. 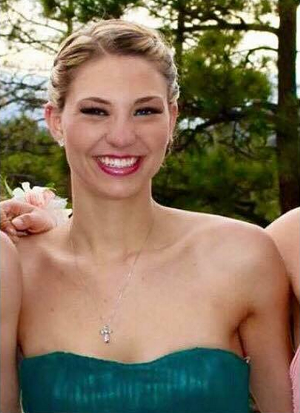 Her father left Moore "in good spirits" at her apartment hours before her death.
Facebook
Police say the ex-boyfriend, a soldier stationed at Fort Carson, has alibi witnesses for the night in question and was engaged in an exchange of text messages with Moore shortly before she died. Bray says that the alibi is flawed, that the boyfriend could easily have left the base that night, and that detectives never bothered to determine his cell phone's location during the flurry of messages, which included a bizarre photo of Moore's leg emblazoned with various names scrawled in ink.

Some of the most disturbing findings in the case, though, were uncovered by forensic analysts hired at the family's own expense. Moore had a broken collarbone that the family believes was incurred before her death, possibly during a struggle — an injury that would have made it difficult to hang herself. What Bray describes as "profuse bodily fluids" were also found elsewhere in the apartment, suggesting the body had been moved after death. Even the writing on her leg appears to be by more than one person.

But the family has been frustrated in their efforts to obtain additional DNA tests and records dealing with the ex-boyfriend. "We're told this kid has a file several inches thick, but we have not been allowed to see it," Bray says.

Ray Moore, Holly's father, has sold his house to help pay for the family's ongoing investigation and the reward offer. A memorial web page is also accepting donations from the public. "We're trying to pay for DNA testing because we can't get anyone else to do it," Bray says. "And we feel a responsibility that this doesn't happen to someone else's kid. At some point, someone in authority has to take another look at this."

Here is the segment that aired recently about the case on ID Now.