The Colorado Coalition for the Homeless has close to 2,000 housing units. Courtesy of Cathy Alderman
A new study from the liberal-leaning Urban Institute shows that when Denver takes a housing-first approach to homelessness, individuals who become housed through these programs have far fewer interactions with police and are arrested less often than those who remain chronically homeless.

"We don’t have to keep going the way that it is. There is a better solution," says Sarah Gillespie, a lead researcher for the Urban Institute's study on the nexus between policing and individuals housed through Denver's widely-acclaimed Social Impact Bond program.

Under that program, which originally ran from 2016 to 2020, private organizations handed over $8.6 million to service providers to fund a supportive housing initiative, with the guarantee that the City of Denver would repay (and then some) the organizations if positive results were generated. The SIB focused on getting housing and providing wraparound services for people experiencing chronic homelessness, particularly individuals who had been without a home for at least one year and had a disability, whether a physical or mental disability, a substance-use disorder or some combination. Participants also had to have had frequent interactions with the criminal justice system. And since the SIB was operating under a housing-first model, participants didn't have to be sober or working: The entire focus was on getting them housed first.

Through the program, the Colorado Coalition for the Homeless and the Mental Health Center of Denver, now known as WellPower, housed 365 people. Many lived in buildings owned by the two organizations, while others used vouchers to stay in units owned by other landlords.

The Urban Institute has been studying the SIB and its effects. In July 2021, the Urban Institute released a report that lauded the SIB, with Gillespie referring to the program as a "remarkable success," since a vast majority of the individuals who participated stayed in housing after three years.

As the study notes, people experiencing chronic homelessness in Denver are much more likely to be cited for offenses that are typically related to homelessness than members of the general population, such as trespassing.

"But this overrepresentation does not apply to other types of offenses — that is, besides those associated with experiencing homelessness — such as crimes against people or crimes related to theft, burglary, or robbery," the study reports. 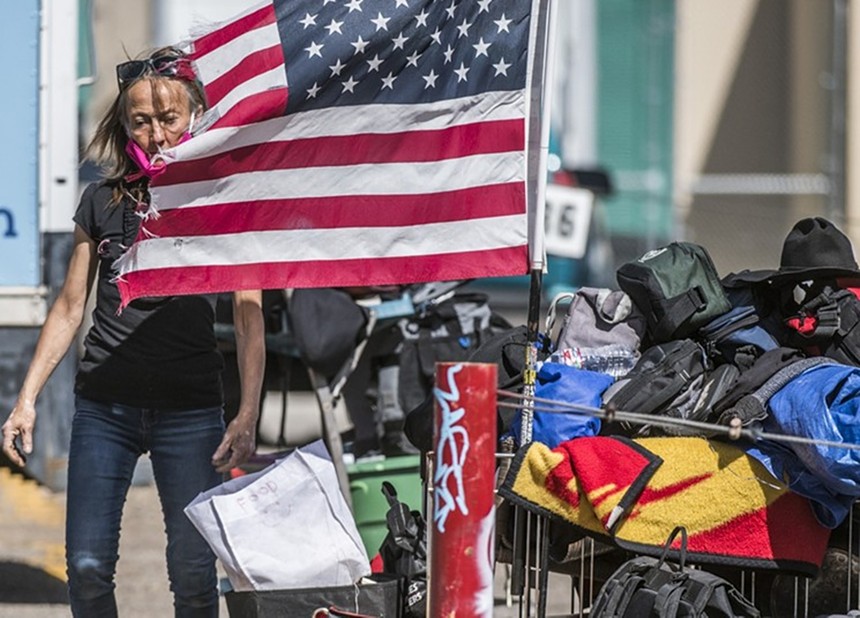 The study suggest moving more people off the streets will cut down on police interactions.
Evan Semon
The Denver Police Department spends a significant amount of time and effort citing and arresting people experiencing homelessness for these lesser offenses. "Of the 92,550 total cited offenses in Denver in 2018, 1,576 were for offenses associated with experiencing homelessness among the SIB target population," the report states. This total offense number does not include those enrolled in the SIB program.

"When police are managing the problem of homelessness because there’s not an actual solution, there’s not enough housing for people who need it, not enough connection to services for people who need it," Gillespie says. "What ends up happening is police spend a lot of time managing that problem through citations of people experiencing homelessness."

This latest study indicates that "arrests related to homelessness among SIB participants dropped by more than half" and that "in the two years after being randomized into the program, people in the treatment group were arrested for 52 percent fewer offenses associated with experiencing homelessness than people in the control group."

The study suggests that the City of Denver could save considerable time and money on police work if it expanded the Social Impact Bond program .

"The SIB evaluation shows that if everyone in this target population were offered a stable place to live and access to services to support them, there would have been 888 fewer cited offenses associated with experiencing homelessness among the target population in 2018," the study notes. "These reductions among the SIB target population could reduce overall cited offenses associated with experiencing homelessness in Denver by seven percent and reduce the time police spend arresting people for these types of offenses each year by an estimated 1,450 hours."

According to Gillespie, the Urban Institute has been working to highlight the success of the Denver Social Impact Bond program since its initial report came out over a year ago, when debate started heating up over whether housing-first should be the country's primary homelessness resolution policy, or the focus should be on recovery- or work-first.

"This analysis is part of a body of work that we have at Urban, which is trying to show that the data shows that housing first works," Gillespie says. "It makes financial sense. It gets better outcomes for your dollar. It’s taxpayer dollars in the right direction."
KEEP WESTWORD FREE... Since we started Westword, it has been defined as the free, independent voice of Denver, and we'd like to keep it that way. With local media under siege, it's more important than ever for us to rally support behind funding our local journalism. You can help by participating in our "I Support" program, allowing us to keep offering readers access to our incisive coverage of local news, food and culture with no paywalls.
Make a one-time donation today for as little as $1.