How Fentanyl Deaths Have Overwhelmed a Denver-Area Coroner's Office 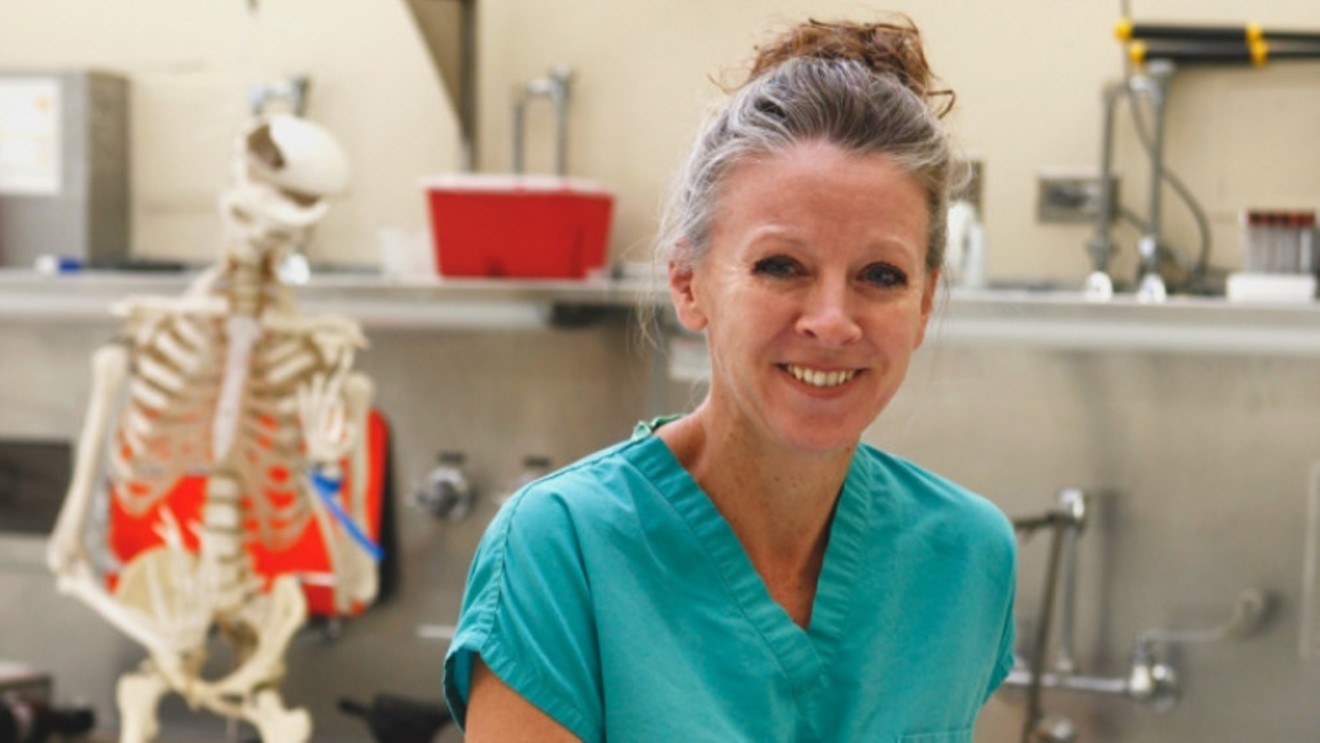 Dr. Kelly Lear has been a staff member with the Arapahoe County coroner's office for eighteen years. kellylearmdforcoroner.com
The ongoing fatal-overdose crisis has been supercharged by fentanyl, which continues to wreak havoc in metro Denver and beyond. But while the tragic consequences for victims' loved ones and challenges for law enforcement agencies have been well documented, the effects on county medical examiners have been widely overlooked. And they are profound, as Arapahoe County Coroner Dr. Kelly Lear understands all too well.

These examinations have helped fuel a rapid rise in the Arapahoe County Coroner's Office workload, which is at by far the highest level that Lear's seen; she was hired as a staffer there eighteen years ago and was first elected coroner in 2014.

"We typically have around 600 deaths per year that fall under the coroner's jurisdiction," she notes. "In 2020, that number jumped up to about 750, so that was a pretty significant increase. But last year, we had just over 900, including more than 200 overdose deaths, about half of them from fentanyl."

A significant portion of this time period overlaps with the spread of COVID-19, but the disease was responsible for only a small part of the larger autopsy total.

"There are two different ways it affected my office," Lear explains. "In 2020, Arapahoe County had close to 800 deaths from COVID, but we only had about thirty deaths that we had to do examinations on in our office during that year and 2021, because we don't have to autopsy everybody as long as a diagnosis of COVID has been made and a physician is available to sign the death certificate. So that was mostly paperwork for my office. But we were impacted in other ways. There was an increase in natural deaths at home, from heart disease or other ailments, where people never sought medical care. That was because of the pandemic."

She also believes that Arapahoe County's 25 percent increase in fatal suicides over the past couple of years may be attributed to fallout from the virus. "I don't think we're going to have as many this year, and that speaks to coming out of the pandemic," she allows. "Maybe people are feeling a little bit better about their situation, or they have behavioral health-service access they didn't have then."

Unfortunately, Lear is seeing no such decrease in overdose deaths generally or fentanyl fatalities specifically, given how the synthetic opioid has wormed its way into the community.

"Back in the 2012-2013-2014 range, we would see fentanyl overdoses related to prescription fentanyl and fentanyl patches," she recalls. "We went through a phase where people would abuse the fentanyl patches by making what was called a fentanyl lollipop, where you would chew on the patches. The patch is supposed to have a slow release through your skin, but if you chew on it, you get a higher dose more quickly. But in 2018, we started to see an uptick in fentanyl deaths more around the illicit market, where fentanyl was being put into other illicit drugs as an adulterant. And in 2019 and 2020, those numbers really took off. We went from seeing maybe three or four fentanyl deaths a year to fourteen in 2018 to 29 in 2019 to seventy in 2020 to 104 in 2021."

Early during this span, she continues, "a lot of the people who died thought they were getting methamphetamine or cocaine or heroin, but they were getting fentanyl, too. In the last year or two, though, we saw a huge increase in fentanyl pills — the little blue pills that are called M-30s in street slang. At first they were being sold as oxycodone, but they were really fentanyl. And now a lot of our drug overdose deaths have been from people who knew they were getting fentanyl, but didn't know how much. A single pill can have such a variable amount because they're being produced illicitly in basements, and there's no control over what's in each one. Somebody might use one pill and it actually contains no fentanyl at all, or very little, because of the way it's been mixed, whereas the next pill in the batch might be mostly fentanyl. That's why the DEA has on its website, 'One pill can kill.'"

These factors have made a bad situation worse for everyone in Lear's office. "We have to do death investigations in all of these cases, so I have death investigators who have to go to the scene and get all the information from friends, families, witnesses," she points out. "Then the bodies are brought back and forensic pathologists have to do the autopsies — myself and one other person, Dr. Casey Bitting. But we're doing too many cases for just two people."

This isn't simply an opinion. The Arapahoe County Coroner's Office is one of four in Colorado accredited by the National Association of Medical Examiners, whose standard recommendation for forensic pathologists is 250 autopsies a year. "We can nudge that up a little, but 325 is the maximum," Lear notes —and with more than 900 autopsies last year, she and Bitting are both way over the limit, making it more difficult than ever to wrap up cases in a timely manner.

Issues at laboratories compound these issues. "We actually had to change the laboratory we used for our toxicology testing," she says. "It was a small lab we trusted and had used for decades, and we really liked the service we received from them. But we were seeing such a huge increase that they couldn't absorb it, and they had to reevaluate their ability to take on the extra work. So now we're using a major reference lab that can mostly keep up." At present, Arapahoe County is still finishing 90 percent of its cases within sixty days, as required by its National Association of Medical Examiners accreditation, but "that can still be two months a family has to wait — and we're sympathetic to their need for answers," she says.

In the meantime, Arapahoe County plans to start advertising this month for a third forensic pathologist to join the coroner's team. But it took Lear fourteen months to hire Bitting back in 2019, and there's currently a shortage of people coming into the field. "Last time I looked, there were over 150 job postings by national medical examiners," Lear notes, "and there just aren't that many board-certified forensic pathologists. ... We're competing with all the other coroner's offices and medical examiner's offices around the country to attract candidates."

Lear hopes that metro Denver's reputation — "It's an attractive place to be" — will give her office a leg up when it comes to hiring a new forensic pathologist. But given the horrific toll fentanyl is taking in Arapahoe County, one may not be enough.
KEEP WESTWORD FREE... Since we started Westword, it has been defined as the free, independent voice of Denver, and we'd like to keep it that way. With local media under siege, it's more important than ever for us to rally support behind funding our local journalism. You can help by participating in our "I Support" program, allowing us to keep offering readers access to our incisive coverage of local news, food and culture with no paywalls.
Make a one-time donation today for as little as $1.