Jon Caldara in a rare quiet moment. i2i.org
Update: On December 27, Jon Caldara crowned the Independence Instititute's first Californian of the Year...for Colorado. And the winner? State Senator Jerry Sonnenberg, a "squishy Republican." Here's the institute's explanation of his win:

"Colorado character is best described as craving the freedom to make our own decisions. By contrast, Californian character, which is taking hold of our once ruggedly individualistic, freedom-loving state, is best described as making decisions for other people. Nothing in 2017 exemplifies this Californian value of making decisions for others better than Jerry Sonnenberg’s Senate Bill 17-267, which ripped away all Coloradans’ right to vote on tax and debt increases. Unlike California, Colorado holds a deep belief in asking voters directly BEFORE raising debt or taxes. We even enshrined it in our state constitution. By calling a massive hospital bed tax a 'fee' and labeling debt as 'Certificates of Participation,' Sonnenberg’s bill raised taxes by $550 million per year and put Colorado families in debt by nearly $2 billion, all while avoiding a vote of the people. This immense Colorado tax increase takes place in the shadow of the historic tax cut from the Republican-led U.S. Congress. We find it telling, yet sad, that Republicans in Washington have more respect for Colorado taxpayers than the state Republican senate leadership who turned Sonnenberg’s Californian idea into law."

"It's like a guy with a drug problem," Caldara adds. "We just need to admit it. When even Republicans are pushing tax increases without a vote of the people, you know we've turned into Eastern California."

While the Independence Institute judges chose Sonnenberg from the five finalists, Polis got the most votes from the public. As for our favorite nominee, the would-be mutton-bustin' banners, they didn't come close. Then again, as Caldara says, "by court order, I'm not allowed to be near sheep."

Who will be Colorado's 2017 Californian of the Year? That's not a typo; it's the latest stunt coming from the Independence Institute, whose president, Jon Caldara, recently penned an essay castigating those who would "change our once liberty-loving state into East California."

According to Caldara, "The Colorado Character is craving the freedom to make your own decisions. The Californian Character is making decisions for other people." And so he cooked up the 2017 Californian of the Year Award. Last week, the Independence Institute announced the five finalists, including a party-pooping Brit who wants to end the all-American tradition of mutton bustin', a sport that hit the international radar when U.S. Supreme Court Justice Neil Gorsuch name-checked it during his congressional hearings. And the quasi-Californians are:

Jared Polis, gubernatorial hopeful, multi-millionaire and U.S. Congressman for his goal to out-Cali Cali with his “goal” of 100% renewable energy by 2040 at a cost of only $44 billion.

Brandon Rietheimer, citizen activist, Bernie sycophant and manager of a Red Robin restaurant, for his work in forcing Denver building owners to plant lawns on their roofs.

Jerry Sonnenberg, state senator, conservative when in his rural home district and liberal when under the gold dome for destroying TABOR by raising taxes and debt to all Coloradans without asking voters first. 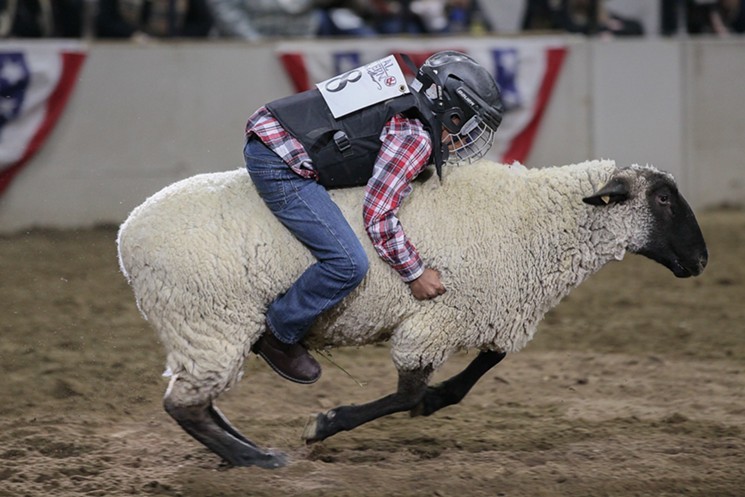 Not in California.
Brandon Marshall
And finally there's Aidan Cook, animal-rights activist and snazzy millennial-beard aficionado, for his efforts to end the time-honored and children-loved activity of “mutton-busting” at the Western Stock Show.

For the past week, the Independence Institute has been collecting votes on its site; a panel of judges has since determined the winner, who will be announced today, December 27.