Thinkstock file photo
This week, Elisabeth Epps, co-lead of the Denver Justice Project, is raising funds for what she's dubbed the Juneteenth/Father's Day Bail Out, an initiative that aims to pay bonds for low-level male offenders who can't afford to do so in time for them to spend the upcoming holidays with their families or loved ones.

But beyond the specific goal of the latest Bail Out, a collaboration with Black Lives Matter 5280 that follows a similar effort tied to Mother's Day last month, is a larger one that could revolutionize the criminal justice system. In Epps's words, "We really want to see the end of money bail. It's unfair and doesn't really do what it's supposed to do."

This bold mission is sure to raise the hackles of many in the law enforcement community. But efforts to reform a system critics see as rigged against the poor are taking place on multiple fronts right now.

Over the past five years, the ACLU of Colorado has filed multiple lawsuits against cities that jail people unable to pay fines assessed against them, arguing that such methods can be equated to debtors' prisons. And during the just-ended legislative session, Representative Adrienne Benavidez and Senator Rhonda Fields introduced House Bill 18-1089, which called for "no monetary conditions of bond for misdemeanors," with the exception of DUIs and offenses related to domestic violence.

The bill, accessible below, didn't pass, but Epps sees its mere existence as a positive sign. If the measure had become law, "Colorado would have been first, without a close second, in meaningful bail reform," she notes. "It was countered by the usual suspects: district attorneys and municipal courts. But the fact that these legislators put it forward without overwhelming community support is exciting, and next fall and spring, we plan to work toward abolishing money bail for misdemeanors." 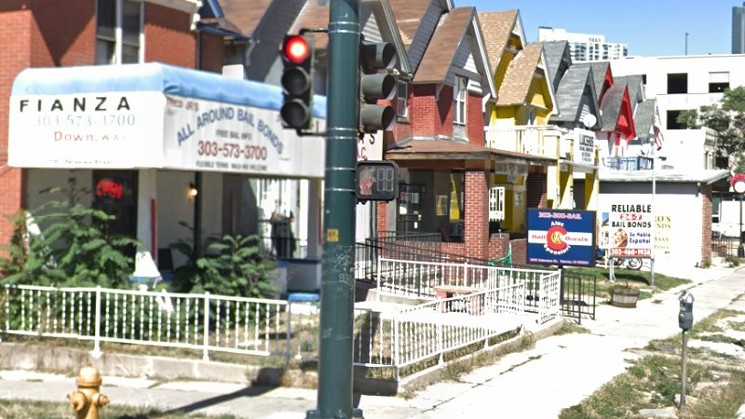 No bail bonds businesses will be involved in the Father's Day bond payments.
Google Maps
The most significant legislative attempt to improve the way bail is handled in Colorado prior to the latest one came in 2013 by way of House Bill 13-1236, also linked here. But in Epps's view, it's fallen short.

"Colorado's governor signed the bill into law, and on paper, it changed the way bail and bonds work," she explains. "It said that bond is supposed to protect the community and ensure that a defendant returns to trial. It's not supposed to be punitive or a revenue-generator. But in municipal court, it still is. The Taj Mahal [the nickname for the Jefferson County Government Center] was built on the backs of poor people, and five years later, poor people and black and brown people are still being held because of an inability to pay. That forces people to plead guilty to crimes they didn't commit and creates circumstances that exacerbate their problems."

Epps's advocacy is informed by her experiences as both an attorney and a defendant.

"I moved to Colorado in 2011," she says. "I'm a lawyer by training, and I came here as a public defender. But I was assaulted by Denver police in 2012, and that really sparked my activism. Then, in 2015, around the time I started working with the Denver Justice Project, I was wrongfully arrested in Aurora. I'm still appealing that case three years later; I was convicted of interfering with a police investigation. And that gives you a different perspective when you see the dismissive way people are treated."

In her view, "injustice feels like too small a word" to characterize some of the indignities she's seen visited upon men and women who find themselves accused of wrongdoing — particularly people of color. She adds, "There's a real degree of disparity between the cities and the counties. While we know that Marvin Booker and Michael Marshall died in Denver jail, your chances of getting a fair shake in Denver are still palpably higher than they are in Aurora. When we have clients, we breathe a little sigh of relief when they say they're in Denver and cringe when they say they're in Aurora or Adams County."

No bail bonds businesses will be involved in the Father's Day bond payments.
Google Maps
Regarding money-bail abolition, Epps was inspired to dive into the topic by California senator and possible 2020 presidential candidate Kamala Harris — but not for the reasons most people might anticipate.

"I know it's blasphemy to say anything against her," she allows, "but she made a bail-reform proposal last year that was terrible. Thinking about it had me feeling hopeless, feeling like this was a train I wouldn't be able to stop. That's when I decided to do something in my community to figure out a way to get people out."

Her first effort, as documented at the website BlackBailOut.org, involved an effort to raise bond money for Denver women being held on minor charges prior to Mother's Day. She had doubts about whether this notion would resonate with folks and was happily surprised to find out that it did.

At that point, Epps began targeting women whose bonds were $5,000 or less. "These aren't women who hurt children or committed violent crimes. These are women whose tags had expired, because they were stuck in a cycle of poverty they can't escape. And to the extent that a bond is something that's supposed to get people back to court, we know from years of data that people tend to come to court whether they have a bond or not — and the people who aren't going to come to court still aren't going to come to court, no  matter what bond you set. It doesn't make them any more likely to come when their money is on the line."

Elisabeth Epps is taking a hands-on approach to bail reform.
Courtesy of Elisabeth Epps
The Mother's Day experiment proved this point, Epps feels. Of fourteen women the project paid to bail out, only one didn't show up for her court date, possibly because she was in custody somewhere else — a not-uncommon scenario, Epps points out. The rest arrived as scheduled, and at least two of their cases have already been dismissed.

A bonus: Because so many of the women appeared in court, the amount of their bonds have been returned to Epps, so that she can use the money again to get more people out of jail. Municipalities typically charge a process fee in such instances, but Epps makes it clear that unlike bail-bonds businesses, which charge between 10 and 15 percent of the sum for their services, the Denver Justice Project is subtracting nothing for itself.

By switching from mothers to fathers, Epps realizes that she's raised the level of difficulty. "Women are less likely to be in for a violent offense, but many men are in for having committed harm, and I'm not interested in sending someone who committed harm back into a potentially harmful situation," she says. "But in Colorado, domestic-violence offenders have a no-bond hold, and the people who are the offenders who would be most frightening to folks aren't eligible to be bonded out anyway."

In the meantime, she continues, "there's a tougher conversation that I'm willing to have — the act of caging men for poverty. Look at Michael Marshall: He was a 110-pound man on a $100 bond, and because he couldn't pay that bond, he died. So I hope we find a Mr. Booker or a Mr. Marshall. But even if we don't, there are still wrongs to be righted."

Click to donate to the Juneteenth/Father's Day Bail Out, as well as to access House Bill 13-1238 and House Bill 18-1089.
KEEP WESTWORD FREE... Since we started Westword, it has been defined as the free, independent voice of Denver, and we'd like to keep it that way. With local media under siege, it's more important than ever for us to rally support behind funding our local journalism. You can help by participating in our "I Support" program, allowing us to keep offering readers access to our incisive coverage of local news, food and culture with no paywalls.
Make a one-time donation today for as little as $1.