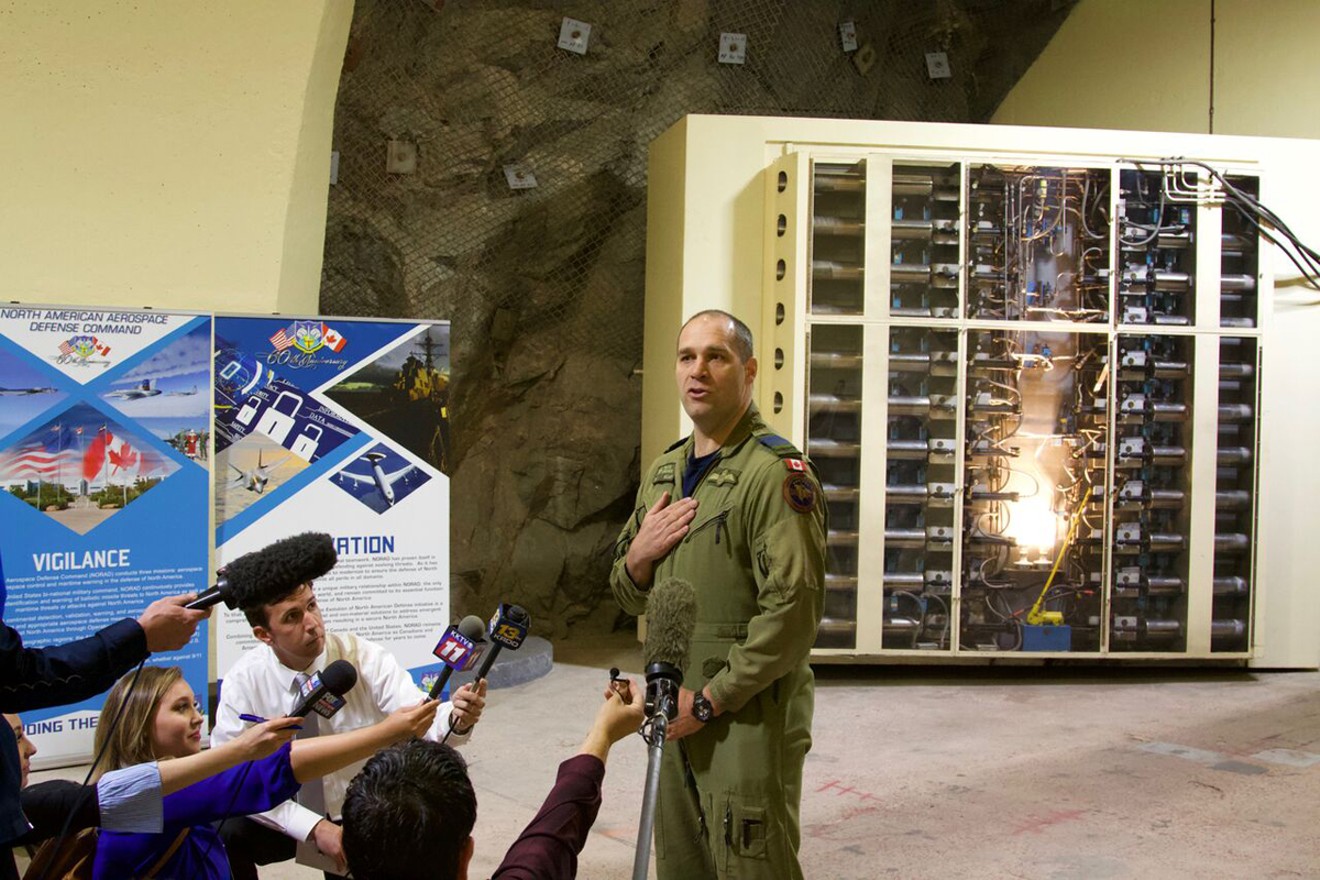 Royal Canadian Air Force Colonel Travis Morehen in front of one of NORAD's blast doors. Courtesy of Matthew Schniper, Colorado Springs Independent
The drive up the world’s most notorious mountain isn’t unlike other scenic ascents of Colorado slopes. The two-lane paved road weaves through tall grass that sways in the wind. Roll down your window and you’ll hear birds chirping rather than a foreboding soundtrack announcing your arrival at Cheyenne Mountain, with its troves of scary government secrets.

On Thursday, May 10, the North American Aerospace Defense Command invited journalists to come celebrate its sixtieth birthday. The tour guides never told us what made sixty any different from 59 or 58, but when NORAD sends you an invitation (via “unclassified” email!), you don’t turn it down.

NORAD is nothing if not a testament to government paranoia. Back in the late ’50s, the threat of nuclear war with the Russians was apparently so intense, the U.S. government tore through 2,000 feet of granite to build an aerospace-monitoring center in Colorado Springs that would alert the U.S. and Canadian governments — maybe Mexico lost the invite? — to incoming missiles. Cheyenne Mountain won the prize because of its solid, near-impermeable granite and its equal distance from the coasts. Plus, Republicans fare well in Colorado Springs.

Despite the center’s legendary origins, our tour guides made sure we knew that NORAD is no “Cold War relic.” As warfare and the threats to the U.S. have changed, so has NORAD. During the heyday of the War on Drugs, for example, NORAD monitored the air for illicit planes carrying Pablo Escobar’s finest up from Latin America, and it began monitoring the world’s oceans for missiles once those became a thing. A Canadian two-star general at Cheyenne Mountain made the call to ground all planes that day in September nearly twenty years ago. And now that the Russians are again a threat, NORAD’s Canadian and American staffers can get those old handbooks out of storage.

Our tour began in a parking lot next to the entry gate, where we were asked to turn over to the U.S. Air Force any recording equipment for screening. American journalists aren’t accustomed to handing over anything to the government; being requested to do so often makes national headlines and might even result in a lawsuit or two. But Cheyenne Mountain has a funny way of making you forget yourself, of reminding you of forces much larger, much more harmful, than that little camera around your neck.

We boarded an unmarked navy-blue school bus and made our way to the security checkpoint. There are no souvenir gift shops on Cheyenne Mountain, at least none that we toured. But we did have to turn in our driver’s licenses in exchange for security badges — and just in case anyone got any funny ideas, we were reminded that taking one of those home would violate statutes 18 U.S.C., 499, 506 and 701 and incur “serious punishment.”

Badges in hand, we lined up to make our way through security screening, which was described as similar to airport security but “more intense,” whatever that means.

Media tours of NORAD were common before 9/11, but Cheyenne Mountain went into lockdown after the planes went into the towers. As the group walked toward the tunnel leading into the mountain, there was grumbling about access issues and the fact that any photos taken on the tour that the brass didn’t like would be erased at the end. But NORAD isn’t an entirely reclusive neighbor: Our tour had to commence at 11:30 that morning to accommodate a 5K.

The tunnel into the mountain was rocky at first, but as the hole of light behind us grew smaller, things started to smooth out, look more intentional. Cheyenne Mountain’s guts have been carved into 115,000 square feet of “office space” parsed into fifteen two- to three-story enclaves that are laid out in a double-H pattern connected, presumably, by more tunnels. We were heading to one of the fifteen enclaves, home of the Alternate Command Center, or the shit-hits-the-fan room.

Everything was built with a catastrophic event in mind. Less than a half-mile in, the tunnel curves to reduce the impact of a blast on NORAD’s tenants. The power is 99.999 percent reliable (those last three nines are important), and the wires that run through the tunnel leading to its various nerve centers are angled so that they don’t shear off when a bomb’s after-shock creates earthquake-like conditions. The buildings in the mountain are situated on springs to withstand such a blast, and in case there were any doubt as to their springiness, after the Cold War ended in the early ’90s and the buildings were unloaded of their bulky computer equipment, they actually rose a few inches, liberated of the weight of defeating the Soviet Union. 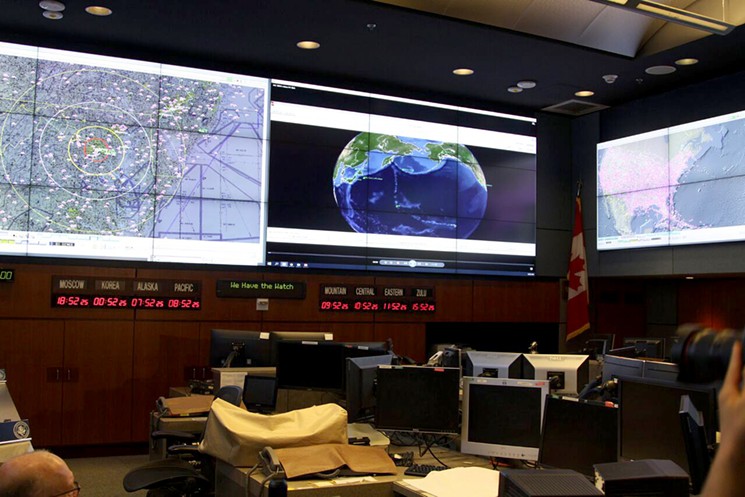 The Alternate Command Center.
Courtesy of Matthew Schniper, Colorado Springs Independent
But the main event — or at least the most photogenic — are the two blast doors that lead to the Alternate Command Center, about a half-mile or so into the tunnel on the right. The doors are each 23 tons of pure American craftsmanship and, per the test runs that happen every Monday, can still close in 45 seconds. At the end of the tour, cameramen were made to delete photos of the doors’ details because there have been unsanctioned attempts at duplicating them. (Which prompts the question: Where could you find spare blast-doors parts from the late ’50s these days? Cuba? Russia?)

Past the nuclear-blast doors, we came upon a wall a couple of stories tall, signaling the entrance to NORAD. Inside, we found what’s essentially an office building. Fluorescent lighting illuminated stark-white halls and stairwells. Staged photos of military personnel inspecting maps and other official-looking things hung on the walls. Even the Alternate Command Center, where NORAD tracks missiles and monitors the air for any erratic flying objects, was like a low-budget version of those command centers in action flicks about astronauts who fall in love while saving the world.

The large TV screens that line the top half of the ACC (even the acronym sucks!) were showing the Weather Channel, interviews with NASA pilots and the air traffic over Washington, D.C. Various digital clocks ticked down the minutes in Moscow and Korea. When our main tour guide, Royal Canadian Air Force Colonel Travis Morehen, pulled up a simulation of a missile heading from North Korea to the United States, we turned into a bunch of giddy fourth-graders. It was an odd reaction, in retrospect, but as Hollywood knows, Americans are obsessed with their own demise.

After seeing that and then leaving the most secure place in the world, you might expect to feel vulnerable, like you’re white-knuckling through turbulence on a puddle-jumper, knowing you’re just one erratic presidential tweet from doom.

But no such feelings descended. As we departed the cave, its darkness and otherworldliness, the way it processes death and destruction like a computer, we remained awestruck, even jovial. No one reached for a phone to call friends and family members, to tell them they loved them. Besides, our phones had been banned.
Only a relative handful of people in the world know what really happens at Cheyenne Mountain. If you’re inclined to trust the government at its word, then you’ll accept that NORAD hasn’t seen any real action since 9/11, not even from Rocket Man. And if you don’t trust the government?

We saw about a tenth of a fifteenth of the place, and everything important was pretty much hidden. Even the computer keyboards in the command center were covered with thick fabric so that our grubby fingers wouldn’t touch the Wrong Button, and the camera guys who ogled the filing cabinet in the command center with “CONFIDENTIAL” stickers all over it had to delete those pictures.

All I know for certain is that NORAD tracks Santa every Christmas Eve, which it began doing way back in 1955 when, as legend has it, Sears accidentally used NORAD’s number in a local newspaper ad for visits to Santa, and officers on duty gamely answered the call. If they want to use me to prove that their services are still relevant after all these years, far be it from me to disappoint millions of children around the world.

For more photos of NORAD, go to westword.com/slideshows.
KEEP WESTWORD FREE... Since we started Westword, it has been defined as the free, independent voice of Denver, and we'd like to keep it that way. With local media under siege, it's more important than ever for us to rally support behind funding our local journalism. You can help by participating in our "I Support" program, allowing us to keep offering readers access to our incisive coverage of local news, food and culture with no paywalls.
Make a one-time donation today for as little as $1.