The late Jack Splitt. Facebook
Last year, we told you about the tragic death of Jack Splitt, the fifteen-year-old namesake of Jack's Law, a landmark bill that allowed young medical marijuana patients in Colorado, like him, to take their cannabis-based medication at school. More than a year later, Mark Pedersen, who made MMJ suppositories that helped alleviate the pain suffered by Splitt as a result of a condition associated with his cerebral palsy, faces five felony pot possession and manufacturing charges in Jefferson County that flowed from the investigation into Splitt's passing, despite the fact that there's no evidence the medication harmed him in any way.

"Even the prosecutors don't believe it killed him," notes Matthew Buck, Pedersen's attorney, about the case, which is outlined in a series of documents accessible below. "But there's been a death, and someone's going to pay for it."

Buck, who spoke to us about marijuana entrepreneur Scott Pack and his indictment in a huge cannabis fraud case this past June, says Splitt died on August 24, 2016, because of an error related to a very different kind of medicine: "Two nurses accidentally overdosed him on phenobarbital. Tragically, they gave it to him twice in too short a period of time. He was given it once by the night nurse, and then the day-shift nurse came on. Because of some miscommunication, the day nurse gave it to him again, and his little body just couldn't withstand it."

When Splitt began going into shutdown mode as a result of the heavy sedative, Buck notes that "the nurses started performing CPR and they called 911 — but they couldn't help him, and Jack passed away at the house," located on the 1600 block of South Garland Court in Lakewood. Shortly thereafter, he goes on, "the police came, because it was a death, and it was potentially suspicious. And at that point, Mark wasn't on their radar at all. They didn't know anything about Mark. They just knew that Jack was dead, so they sent a detective from the crimes-against-children unit to investigate the house with a search warrant." 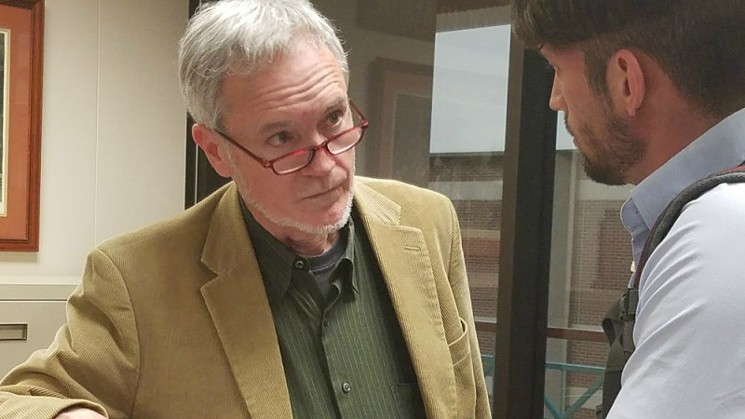 A photo of Mark Pedersen from a GoFundMe page to raise funds on behalf of him and associate Ron Niehouse, who's also been charged in the case.
GoFundMe
Before long, the detective found plenty of marijuana, and for a very good reason: Pedersen and Ron Niehouse, who has also been charged with cannabis crimes in the case, were living in the basement of Splitt's home at the time and making cannabis-oil suppositories.

"This isn't stuff you're supposed to smoke," Buck stresses. "Mark makes it to be inserted rectally by people who are so sick that they can't consume it any other way — often people who are in late-stage cancer and who need their symptoms to be alleviated. Mark has seen great results from this treatment in children and adults with late-stage cancer. He'll say it's a cure, but we can at least agree that there have been huge improvements in their condition."

Splitt, for his part, was afflicted with dystonia, which causes involuntary muscle contractions of an especially agonizing sort. "When you think of people in pain, you think of them curling into a ball," Buck says. "But with dystonia, Jack's body would go into a reverse of that; he'd bend backwards so that it was basically like breaking his back. It was incredibly painful, but this medicine stopped the contractions from happening for Jack and other clients I have. It lets kids who have what Jack had be functioning, regular kids."

The discovery of marijuana in the Splitt home triggered a second search warrant and the involvement of the West Metro Drug Task Force, whose members found "what they believed to be a large-scale drug-manufacturing operation," Buck allows. "But that's not what it was at all. When you're making concentrate, there's a lot of liquid waste that eventually evaporates into concentrate — so the amount that was there really ended up being about one-fifteenth or one-twentieth of what they found. They found something like 20,000 grams of liquid, which translates to about 25 pounds — but that would eventually have been about two pounds of concentrate."

Governor John Hickenlooper signs House Bill 16-1373 , popularly known as Jack's Law, as Jack Splitt looked on.
Photo courtesy of Stacey Linn/CannAbility Foundation
He adds that "people travel all across the country to get cannabis oil from Mark Pedersen, and he's traveled the country teaching people how to do this. He's never sold cannabis in his life, ever. He's been doing this for over thirty years, and he's never taken a dime for the medicine he makes. He gives it away — and he makes it with marijuana people donate to him."

Amendment 20, the measure that legalized medical marijuana in Colorado back in 2000, limits patients to "six marijuana plants, with three or fewer being mature, flowering plants that are producing a usable form of marijuana," but adds that "for quantities of marijuana in excess of these amounts, a patient or his or her primary caregiver may raise as an affirmative defense to charges of violation of state law that such greater amounts were medically necessary to address the patient's debilitating medical condition."

Nonetheless, numerous patients have been prosecuted for exceeding plant counts in the nearly two decades since then, often because they were using them to make concentrates. In several prominent trials, including ones involving Jason Lauve in 2009, as well as Bob Crouse and Josh Jones, both in 2012, juries sided with the patients.

Pedersen's case is a bit more complicated. Buck acknowledges that while Pedersen had a valid medical marijuana card, he wasn't registered as a caregiver for Splitt. But he feels the concept is the same, and so is the confusion over assorted aspects of the concentrate-making process. "If you go into a situation with a preconceived narrative, you can make any evidence fit the narrative — so if you think someone is making large quantities of concentrates and see big jars of greenish brown liquid, you presume it's all concentrate. But that's not the case. It was mostly grain alcohol that had turned green because it had a very, very small amount of marijuana product in it."

A family photo of Jack Splitt, lower right, with mom Stacey Linn and brother Cooper, as seen on a GoFundMe page created after his death.
GoFundMe file photo
Moreover, Buck emphasizes that Pedersen "wasn't producing marijuana concentrate in the manner the statutes proscribe, because he was using grain alcohol without a flame. You don't need flame to make alcohol evaporate in the same way you do with butane, which has a very high evaporation point. Those are the cases you've seen where people have blown up their kitchens, because they involve open-air flame and butane on either a stove or a cook top. What Mark was doing was effectively making bubble hash."

According to Buck, prosecutors with the First Judicial District have been "very willing to listen about the process and what we had to say." Thus far, they haven't dropped the cases against Pedersen and Niehouse or drastically reduced the charges below the felony level, but, he says, "We're still in discussions with them."

As Buck sees it, his most important goal is to prevent Pedersen from being punished simply because he was in close proximity to Splitt when the teen died.

"The fact that there's a tragic death involved in this case means there's pressure coming from the top," he believes. "But I really think this is a case where someone has been mischarged and the DAs are trying to find charges that fit the police narrative."