Jared Polis on Home Life, His Childhood and the Rockies

Polis for Colorado
We recently profiled both of Colorado's gubernatorial candidates, Walker Stapleton and Jared Polis. But we wanted to get even more in-depth with the challengers and ask more questions about their background and their lives away from the cameras.

Polis agreed to sit down with us and chat about his life on the campaign trail and outside of politics, including his love of the Rockies, gaming and his family life, and how he's able to balance it all while running for governor and being a congressman. Stapleton did not return our interview request (but it's not too late, Mr. Treasurer!).

Westword: Walk us through a day in the life of your campaign.

Jared Polis: I declared my candidacy last June in Pueblo. I think I'm the first candidate for governor to declare their candidacy on Reddit. Since then, we've had over 300 free meet-and-greets in all parts of the state, which is the biggest part of the campaign: just listening to people where they are. Whether it's in Northglenn or Morrison or Pueblo or Grand Junction or Sterling, we're just having free meet-and-greets where people can come by a coffee shop or somebody's home and I get to hear from people from all walks of life and from all parts of the state about what they would like our state to do more officially or better.

How are you able to manage that with your family life?

Fortunately, campaigns have an expiration date; they're finite. So win or lose, it's over November 6. But, yes, it's very hard on a family and our seven-year-old and four-year-old, because basically I've worked two jobs over the last year. I still have my day job [as a congressman], where I have to go to Washington for four days a week, most weeks. It's been very hard. Obviously, a candidacy is very hard on a family. But again, it's a finite period of time, it's over soon, and I'm certainly looking forward to that one way or the other.

How are you able to manage your personal life with the campaign? Lots of FaceTime?

I FaceTime all the time. Both of [the kids] can FaceTime me. Occasionally, I'll take my seven-year-old to Pueblo for a day, to Colorado Springs for a day. He'll come around with me sometimes. I'll take him fishing in the summer, we'll go up to Eldorado Springs to fish. It's obviously tough [to keep in touch]. We FaceTime a lot, and I try to spend the time I can and hopefully get home before bedtime so I can tuck them in.

How close are you with your parents and your brother and sister?

They help a lot. My parents take the kids a lot, a couple days a week. My brother and sister help, too. They all are supportive of me spending this much time on this, and again, with the understanding that it's finite and, of course, thankfully, it has an end date.

Our family's pretty close. We have cousins in Evergreen and in Boulder, and I was very close to my grandmother, June Polis, who passed away a few years ago.

Would you mind describing your grandmother and your relationship with her and why she meant so much to you?

Well, I grew up very close to her, and she would take me around the country as a teenager, working trade shows and setting up booths. I got work from her and to learn from her and travel with her. She was just a great influence, and I'm glad she got to know my kids, her great-grandkids.

If you had to describe yourself in a handful of words or a few phrases, how would you do that?

I always like to think of a better way. I try to be creative and bring new solutions that others think of, or that I think of, to improve the process and make life better. I like transforming ideas into reality, like when I started several schools. I hope to bring that same kind of spirit of innovation to the state. 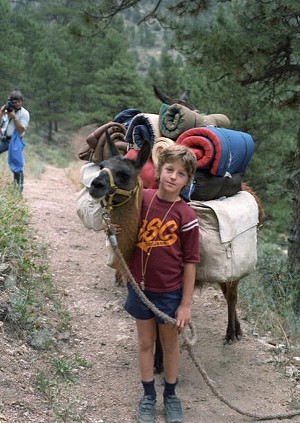 Polis's innovation started at a young age, finding a willing animal to carry his family's sleeping bags.
Polis Campaign
Do you consider yourself a religious or spiritual person?

We're just moderately religious. I'm Jewish, so it kind of means on High Holy Days we go to temple; it's kind of the equivalent of Christians going on Easter and Christmas. It's the major holidays that we keep at the home, like Passover, of course, so I expect our kids will be bar and bat mitzvah'd. I was. That sort of thing.

Tell us about your childhood.

Well, my parents are very creative people. My mother, Susan Polis Schutz, she's a poet. My father, Dr. Steven Schutz, has a Ph.D, in physics, but was an artist and was so for most of my childhood. So I grew up in a very creative household, and my parents were always very inspirational in terms of being very creative people, but also grounded and running a small business that supported the family.

Based on what you've seen out there, is there something that isn't widely known about you?

One of the things I enjoy in my downtime is I'm a gamer. So I play computer games, PC games, console games at 10 or 11 o'clock at night. I [also] like to cook. I haven't had time, obviously, when I have two jobs, but I like to cook for the whole extended family. So it's fun for me to spend half a day cooking for, like, fourteen people.

I cook my late grandmother's recipes. I have her Rolodex of recipes, so among other recipes for the various vegans and different diets in the family, I also cook her noodle kugel and chicken cacciatore and others.

Are you still a big Rockies fan (as mentioned several times in "Young Blood," a 2004 feature on Polis)?

Big Rockies fan. Well, the good news is we had a post-season; the bad news is three and done. But it's always good to see the Rockies in the post-season, of course.

I like the numbers. I think for me as a kid, I think it's part of how I learned math, like for a lot of boys: statistics, averages, calculating earned run averages. So of course I love the numbers, I love the concept of replacement value and moneyball, cybermetrics. But baseball's both an art and a science. While the science side is fine, you can't take away the art as well.

Do you read much about yourself in the media, or do you prefer to have an arm's-distance relationship with your own press coverage?

I just try to track what's going on from that perspective. But I'm more interested in reading about the news of the day and new ideas that people are presenting anywhere in the world that might work here in Colorado.

If you look at my personal Twitter feed, you'll see a bunch of different things that I just come across.

This conversation was lightly edited.
KEEP WESTWORD FREE... Since we started Westword, it has been defined as the free, independent voice of Denver, and we'd like to keep it that way. With local media under siege, it's more important than ever for us to rally support behind funding our local journalism. You can help by participating in our "I Support" program, allowing us to keep offering readers access to our incisive coverage of local news, food and culture with no paywalls.
Make a one-time donation today for as little as $1.