Jeanette Vizguerra Named One of Time's 100 Most Influential People 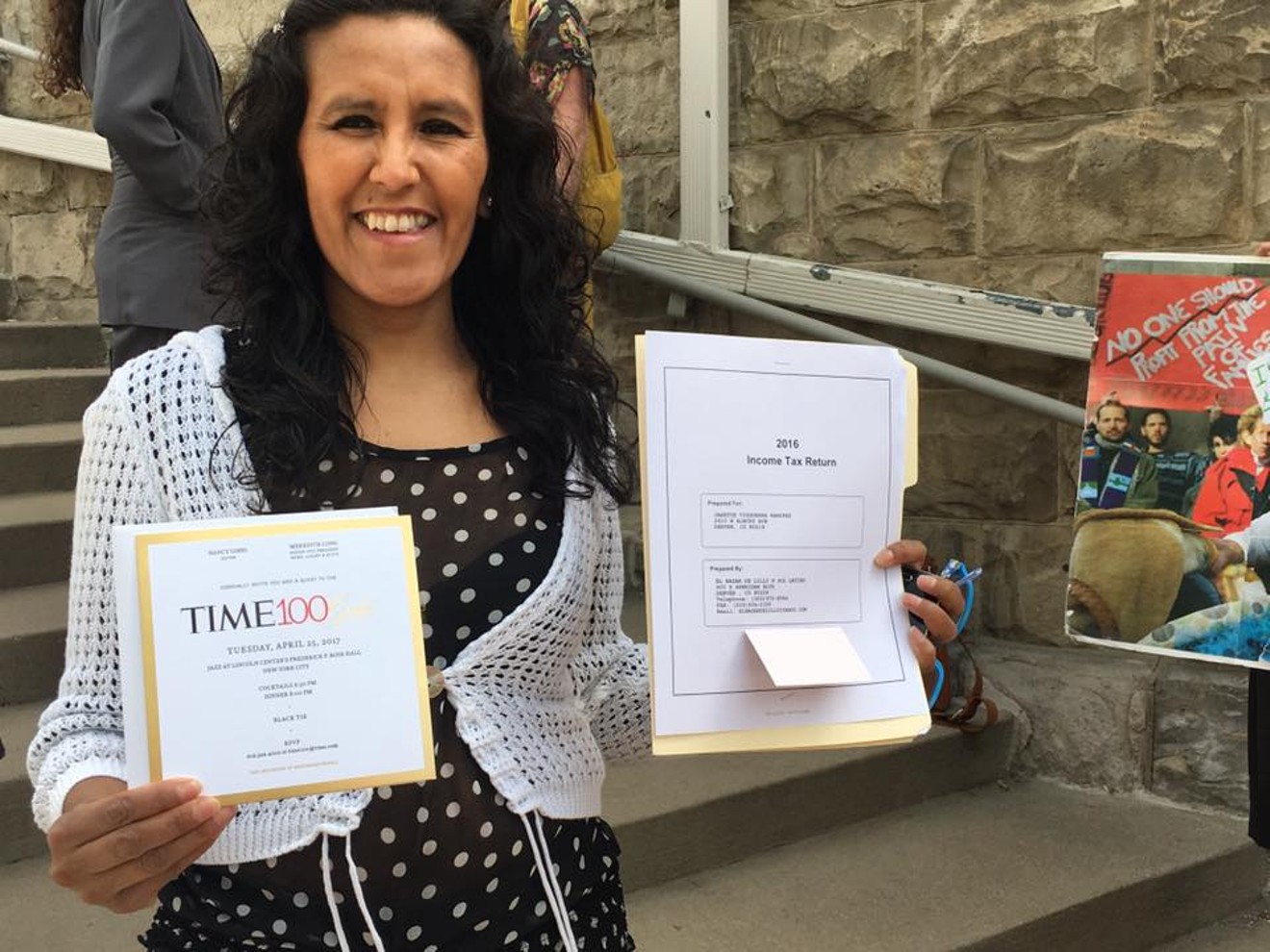 Jeanette Vizguerra holds up a copy of her certificate certifying that she was named one of Time Magazine's 100 most influential people in the world. Courtesy of the Meyer Law Office
UPDATE, April 25: Unable to attend the Time 100 Gala on Tuesday night at the Lincoln Center in New York City because of an ongoing threat of deportation if she leaves sanctuary, Jeanette Vizguerra has organized her own community gala to take place tonight, April 25, at the First Unitarian Society, where she has been staying since February.

Jeanette’s attorney, Hans Meyer, stated, “Jeanette Vizguerra is on the same list as Donald Trump and Pope Francis, but ICE still thinks that Jeanette is not worthy of a stay of removal. Jeanette has an initially approved U visa as a victim of crime, pending private bills in both the House and Senate, and is now internationally recognized as a symbol of the immigrant rights movement. Because ICE refuses to grant her a stay of removal, Jeanette is unable to attend the prestigious Time 100 gala. Never one to give up hope, Jeanette will celebrate this honor with friends and family at a Community Gala tonight from sanctuary.”

Time magazine’s annual list of the 100 most influential people in the world was just announced, and it includes someone in Denver who has been making international headlines lately: Jeanette Vizguerra.

Her inclusion on the list puts her alongside famous world leaders, the Pope, politicians like Elizabeth Warren and John Lewis, and sports stars like Colin Kaepernick.

Vizguerra is a well-known activist and undocumented mother of four who has taken sanctuary at the First Unitarian Society in Capitol Hill to avoid her deportation. She’s been there since February 15, when Immigration and Customs Enforcement (ICE) agents were ready to arrest her after a stay of her deportation expired.

She’s been fighting to remain in the United States since 2009, when she was pulled over during a routine traffic stop and was discovered to be undocumented. She’d been living in the U.S. since entering the country from Mexico in 1997 and had become an active member of the Colorado immigration community and organizer with SEIU Local 105, where she fought for better pay and benefits for janitors.

Vizguerra had successfully petitioned for five stays of removal and was waiting on an application for a special “U visa” when Donald Trump became president. Her sixth request for a stay was denied in December, which is why she decided to seek sanctuary before her next ICE check-in in February – an option she was familiar with, having played a key part in setting up the Metro Denver Sanctuary Coalition in 2013. Today the group includes nine congregations. 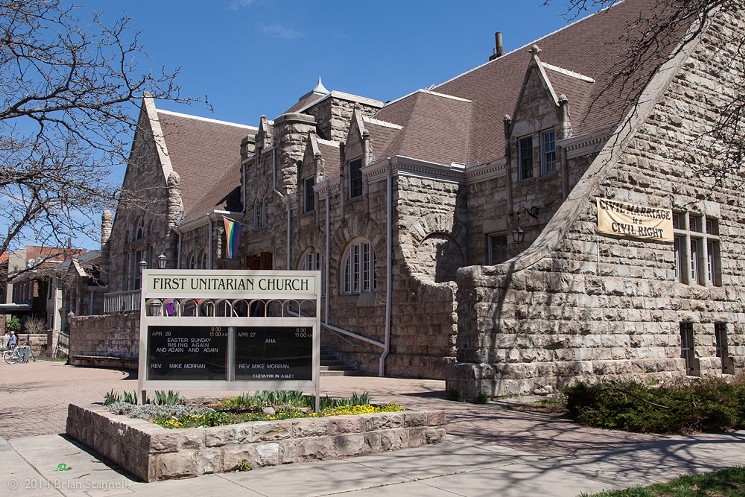 The church where Jeanette Vizguerra found sanctuary.
First Unitarian
Since Vizguerra took sanctuary in the church, news of her situation has reached audiences around the globe. Westword recently interviewed her as part of a feature about her attorney, Hans Meyer; Vizguerra told us that she felt a responsibility to use her situation to speak out against the Trump administration and its crackdowns on immigrant communities.

“The public attention doesn’t make me feel like a star or unique; I see it as an opportunity to raise my voice and educate more people,” she explained. “This isn’t my fight alone. What’s stressful is that this is for my community, and I feel responsibility at a national level to represent a face and a voice — not just for Mexican and Latino immigrants, but for all immigrants.”

On some days, Vizguerra said, she does marathon media interviews, with barely enough time for a bathroom break between conversations.

Here's Vizguerra's response to being named to the Time 100 on April 20: “I am deeply honored, and thank Time for including me with such a stellar constellation of individuals. This recognition is a result of my eight years of struggle against my own deportation, and an acknowledgement of my twenty years of contributing to the economy of this country as an immigrant: even here in sanctuary, this week I made sure to file my taxes. Above all, I hope this recognition serves as an example of my love and dedication to my children Tania, Luna, Roberto, and Zury.” 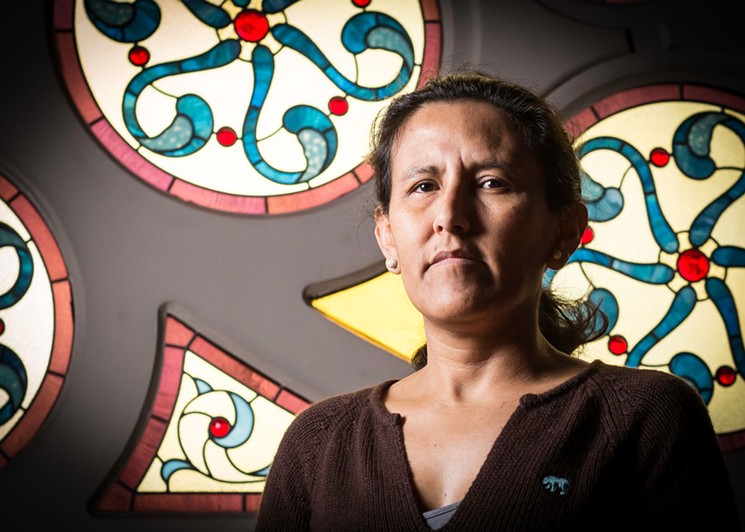 Jeanette Vizguerra has taken sanctuary in a Denver church.
Jake Holschuh
Attorney Meyer, as well as Meyer Law Office policy director Julie Gonzales, sent out their own statements this morning in reaction to Vizguerra's inclusion on Time's list.

Says Meyer: "Jeanette Vizguerra’s courage – as an immigrant, a mother, and a survivor of crime – to stand true against the nativism of the Trump administration serves as a humbling reminder of what the real American values of courage, dedication, and perseverance look like. She has been recognized by Time magazine for doing what every other client in my office, and every immigrant in this country does daily: fight for her family, for her dignity, and for a fair shot in her immigration case. Under the Trump administration, ICE has metastasized into a rogue agency that ignores its own rules to advance a mass deportation agenda. Jeanette is a survivor of violent crime with a pending application for lawful U visa status, and she has private bills to legalize her status pending in both the U.S. Senate and House of Representatives. It’s time for ICE to uphold its own guidance and immediately grant her a Stay of Removal.”

Adds Gonzales: "I’ve worked with Jeanette as an activist for a decade, and have been honored to serve as her paralegal in her fight against deportation for the past four years. I find myself constantly amazed by Jeanette’s determination and grace under even the most difficult of circumstances. This recognition is tremendously well-deserved – and it speaks volumes about ICE that they still haven’t found her worthy enough to merit a grant of her Stay of Removal."

Vizguerra and her attorneys will hold a press conference at the First Unitarian Society, 1400 Lafayette Street, today at 10:30 a.m.

Vizguerra and the Meyer Law Office have also been advocating that Denver pass sanctuary laws, and at a community gathering at 6 p.m. on April 27 at the Denver Inner City Parish, they will unveil a model sanctuary policy for the city.