The JonBenét Ramsey Case At 25: The Early Years 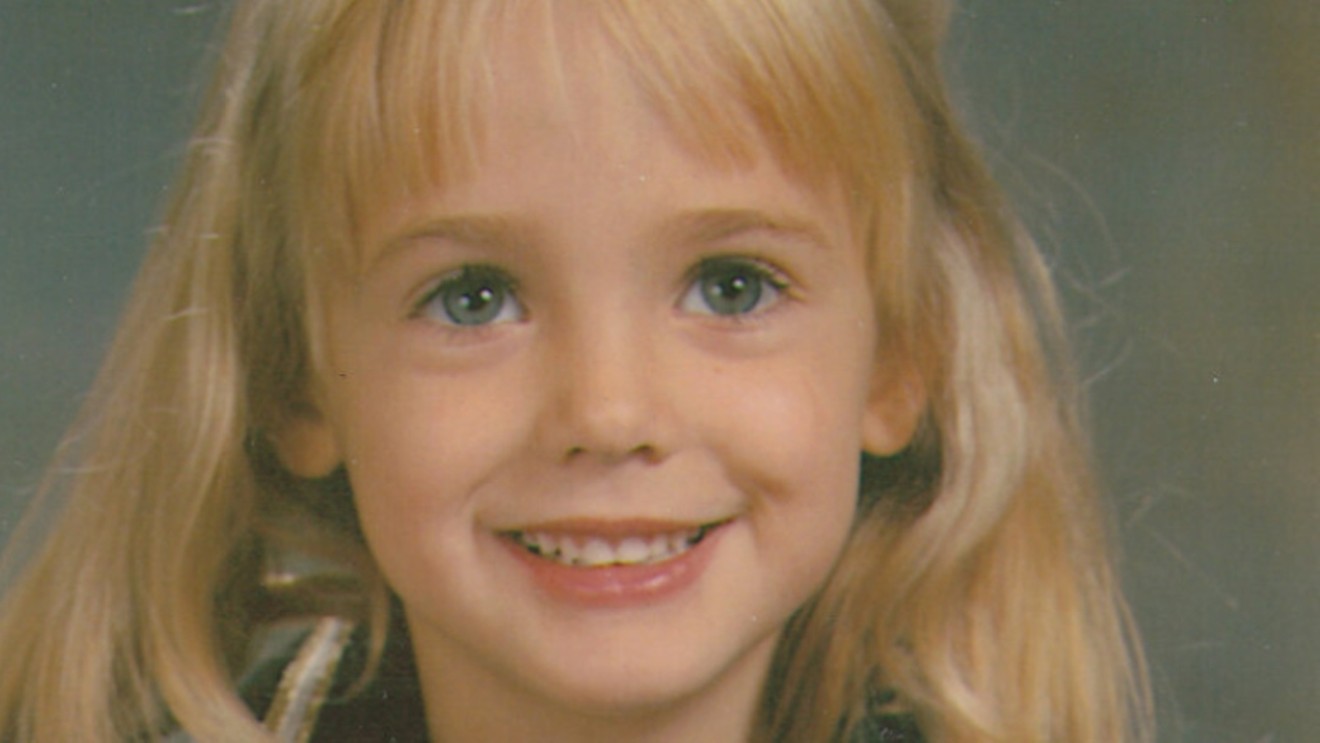 A school photo of the late JonBenét Ramsey. paulawoodward.net
The body of six-year-old JonBenét Ramsey was found in the basement of her lovely Boulder home early on December 26, 1996. A quarter-century later, no one has been convicted of murdering the girl, and the question of who took her life is as passionately debated today as it was when Westword first started covering both the heartbreaking case and the hoopla surrounding it.

This tragedy wasn't the first to become a national fascination during the cable-news era, when network programmers realized that huge chunks of the 24-hour information cycle could be filled by ongoing coverage of mysterious crimes. After all, the arrest of football great turned TV and movie star O.J. Simpson had happened over two years earlier, in 1994. But Simpson was already a celebrity when the nation watched a slow-speed "chase" involving a white Ford Bronco. In contrast, JonBenét was a relatively unknown child, albeit one whose participation in child beauty pageants had been thoroughly documented by way of videos and photographs perfect for wringing pathos from her awful fate.

That the public responded to this material with such passion was a revelation to media executives. Suddenly, they realized that they didn't need to wait for a famous person to commit a heinous act. Instead, they could manufacture their own true-crime stars and frame coverage to mimic a television serial. The stars of this particular show included wealthy businessman John Ramsey; his melodramatic wife, Patsy; quirky older brother Burke and the victim herself — so young, so beautiful, so promising, so doomed. And the supporting cast, including law enforcement officials and potential suspects, grew at a dizzying pace, fueled in part by the rising influence of a little thing dubbed the World Wide Web.

In the first of a three-part look back at the case (click to read parts two and three), we're offering excerpts from two Westword feature articles from 1998 and another from 2000, accompanied by links to the complete articles. Together, they offer a sense of what the circus was like in the early years, when observers were just beginning to sense that this obsession was built to last.

A year ago, Boulder police chief Tom Koby faced the cameras and promised that "our guy won't walk."
Since then, of course, the JonBenét Ramsey murder investigation has limped along. Thus far, the only arrests remotely related to the case have been that of a friend of the Ramseys who went after alleged reporters with a baseball bat; a "performance artist" who stole the morgue page referring to JonBenét and later set fire to the Ramseys' mailbox; and a former deputy sheriff and a photo-processing technician who leaked photos of the dead girl to the Globe.

While an arrest has yet to be made for JonBenét's murder, however, people touched by the crime have already gone to court to see that justice is done — at least for them.

There's no statute of limitations on murder — but there is on libel.

The week before, Boulder police detective Linda Arndt had sued her employer, claiming, among other things, that the Boulder Police Department's treatment of her resulted in defaming statements being broadcast on talk radio. Arndt's $150,000 suit contends that a department gag order prevented her from defending herself — and that Chief Koby did nothing to stop the defamation. (The City of Boulder has already settled a suit filed by Sergeant Larry Mason, who sued after he was removed from the Ramsey investigation and accused of leaking information to the press.)

At least no one's accused Arndt of murdering JonBenét. The day before Arndt went to court, possibly the most unusual suspect to surface — yet — filed his own suit in Boulder District Court. On February 3, Stephen Miles, a 49-year-old Boulder photographer, filed a defamation case against the National Enquirer, two of its reporters and John Ramsey. The October 21, 1997, issue of the tabloid had trumpeted a "JonBenét bombshell" on its front page: "Dad: We Know Who Did It." Below a pouty-lipped photograph of JonBenét was a picture of Miles, along with the promise of an "exclusive interview with man Ramseys say killed JonBenét."

Enquirer reporters John South and David Wright started their story with this: "John and Patsy Ramsey expect to be arrested for the murder of their daughter, but they already have their defense strategy in place — pointing at a man they'll claim is the intruder who killed JonBenét. 'John and Patsy will claim that the real killer is a neighbor, Stephen Miles, who was once arrested and accused of a sex offense against a minor,' a source close to the couple revealed."

But another anonymous source, this one close to the Ramsey team of lawyers, denies that John Ramsey ever made such an accusation. "Over the course of time, if you look at who we've let interview John, we've been pretty damn careful," says the source. "Now I ask you: Are we going to let him go talk willy-nilly to some fucking dog biscuit at the National Enquirer?"

With the new fall television season almost here, how does this premise grab you: A group of women, ordinary gals — housewives, soccer moms, office workers — decide to spice up their humdrum lives by entering the glamorous and exciting world of undercover private investigation. Been done before, you say? Wasn't Charlie's Angels about a group of bored, albeit sexy, policewomen recruited to work for a private investigator?

Well, then, here's a ’90s twist: They use the Internet to catch the killers. Still not interested? Okay, get this: They solve real-life crimes, crimes ripped from the front pages of today's newspapers. And there are bad guys, too — other Netheads who cause trouble and work as enemy spies and throw out bitchy one-liners every now and again. Very Heather Locklear.

And here's the kicker: The action centers on Boulder, Colorado. It's The Net meets Golden Girls, with a splash of Murder, She Wrote thrown in.

Nah. Too ridiculous. Not even Aaron Spelling would produce something that far-fetched. It could never happen, not even on TV.

But it could happen online. After all, virtual reality is stranger than fiction.

Meet shorty, tinky, CatNip, mapek and, of course, Mrs. Brady. These gals are plugged in and ready for action. Their tools: the Net. Their destination: Boulder. Their target: JonBenét Ramsey's killer. Look out, sugar, ’cause here they come.

More than twenty months have passed since JonBenét Ramsey, a six-year-old beauty queen, was discovered murdered in the basement of her Boulder home on December 26, 1996. Although the investigation into her death has yet to produce an indictment, it's already given birth to a creature that grows larger every day: the JonBenét virtual community.

The seeds of this online phenomenon were planted just days after the murder in the Boulder News Forum, an online service of Boulder's Daily Camera where people can post messages to one another or respond to other people's posts. They can also chat in real time with one another in a virtual chat room. While Boulder residents were still suggesting publicly that local grocery stores ban the tabloids that were focusing on  JonBenét's murder, this was one of the early places where people went to talk about the case's scintillating details and to go over the list of possible suspects: an unknown local sicko, the big-haired mama, the ice-cold daddy, the big brother, the little brother, Santa. It was an online game of Clue....

Patsy Ramsey: I want you to look at me and tell me what you think happened.
Steve Thomas: Actually, I'll look you right in the eye. I think you're good for this. I think that's what the evidence suggests.
— Larry King Live, May 31, 2000

For Steve Thomas, an experienced officer who joined the Boulder Police Department in 1991, the town's system of justice came as a shock. His recent book on the Ramsey case, JonBenét: Inside the Ramsey Murder Investigation, describes a corrupt district attorney's office and a police department split between a few remaining old-line cops and a new-age chief whose motto was "Police unto others as you would have them police unto you."

Boulder District Attorney Alex Hunter is stepping down after 28 years in office, and his successor will be determined in next month's election, when Mary Keenan, who has worked in Hunter's office for fifteen years, faces Republican challenger Dave Sanderson. Keenan is expected to win the race, and Thomas, who now lives in Arvada, says he has little hope for significant change in justice, Boulder style.

"I'm not a resident of Boulder County," he says. "It's not my fight anymore. But I think should someone from within that office inherit the throne, nothing will change. It will be the same dynasty that we've seen for three decades, the same miserable failure of justice in Boulder."

Thomas was the lead investigator on the Ramsey case. He left the Boulder Police Department in August 1998, writing in his letter of resignation that Alex Hunter's office had crippled the investigation. In his book, he expands upon these accusations. He also lists the evidence that he believes points to Patsy Ramsey's guilt....

Parts two and three of our look back at the case will be coming soon.
KEEP WESTWORD FREE... Since we started Westword, it has been defined as the free, independent voice of Denver, and we'd like to keep it that way. With local media under siege, it's more important than ever for us to rally support behind funding our local journalism. You can help by participating in our "I Support" program, allowing us to keep offering readers access to our incisive coverage of local news, food and culture with no paywalls.
Make a one-time donation today for as little as $1.