The JonBenét Ramsey Case at 25: The Last Five Years 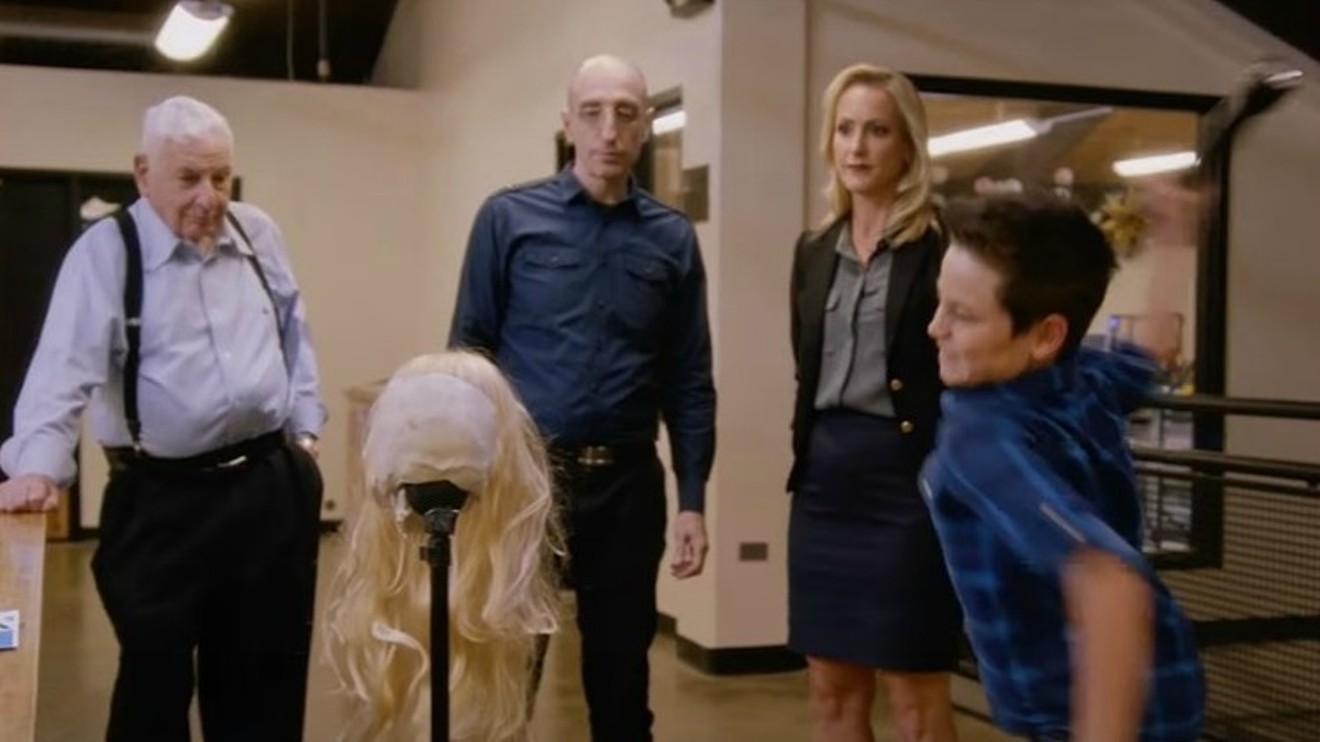 Dr. Werner Spitz, left, watches as a child is called upon to act out a theory of how Burke Ramsey could have killed his sister, JonBenét, from the CBS program The Case of: JonBenét Ramsey. CBS via YouTube
This is the final installment in our three-part look at the JonBenét Ramsey murder case at 25. Click to read parts one and two.

Over the past five years, much of the news generated by America's ongoing obsession with six-year-old JonBenét Ramsey, whose body was discovered in her lovely Boulder home early on December 26, 1996, has tilted toward the bizarre. For instance, CBS produced a mini-series that found a series of experts surmising that the girl's older brother, Burke, had actually committed the terrible act. But the production wound up backfiring on the network, which ultimately settled a lawsuit filed by the now grown-up Burke.

Questions regarding who killed the child continue to linger — and that's only proper. JonBenét Ramsey may have long ago become a pop-culture staple, but she was once a flesh-and-blood child whose life was taken from her in an incredibly violent manner.

Below, find excerpts from Westword articles published from 2016 to 2021, accompanied by links to the complete stroies that examine crazy hypotheses, legal actions, spin sessions and the reasons the current residents of the home where JonBenét died have no interest in selling.

This Christmas will mark twenty years since the murder in Boulder of six-year-old JonBenét Ramsey. Yet the fascination with the still-unsolved slaying refuses to dissipate.

Case in point: During the past 24 hours, there's been an explosion of interest in the Internet theory that JonBenét didn't die — and she's actually singer Katy Perry.

The notion isn't new. One of the main YouTube videos espousing the Perry/Ramsey tie was actually posted in December 2014. And two others first popped up last April and September, respectively.

...The Hollywood Reporter broke the news about the CBS series following the finale of FX's The People vs. O.J. Simpson.

But unlike that program, in which celebrities such as Cuba Gooding Jr. and John Travolta appeared, the JonBenét offering will kick off an unscripted anthology that will turn its gaze upon a different real-life crime each season — should it last, that is.

The model, in all likelihood, is Netflix's Making a Murderer. According to the Reporter, the show "will reunite the original investigators in the Ramsey case as well as new experts who all re-examine the unsolved case."

The person at the helm of the series, if all goes as anticipated, will be Tom Forman, an Emmy winner whose credits include 48 Hours — and indeed, that program devoted an episode to the JonBenét mystery back in 2004....

"Twenty Times the JonBenét Ramsey Murder Has Been Solved"
By Michael Roberts
July 19, 2016

JonBenét Ramsey is on the current cover of the Globe, alongside a screaming headline about "Chilling New Evidence!," a subhead citing the "real reason beauty queen was MURDERED!," and photos of "two suspects arrested."

Case closed? Not quite.

As we've been reporting, it's been nearly twenty years since the JonBenét murder, which took place in Boulder on December 25, 1996 — and the impending date (which Boulder officials refuse to call an anniversary) has prompted a renewed interest in the case from TV and movie producers, as well as the supermarket tabloids.

Over the past two decades, publications such as the Globe, the National Enquirer, In Touch Weekly and more have claimed to have solved this terrible crime many times, announcing these scoops with a certitude that would be a lot more amusing if they didn't deal with the horrific murder of a child....

...In statements to police, John and Patsy Ramsey talk about returning home Christmas night from a dinner party, putting a sleepy JonBenét to bed, and turning in themselves. Not a creature was stirring, and all that sort of thing. But on Dr. Phil, Burke talked about heading downstairs to put together a toy he'd received for Christmas. The Case of: investigators believe JonBenét was up and roaming around, too, which would account for the bit of pineapple that turned up in her autopsy. And then, of course, there's the enhanced version of the 911 call Patsy made the next morning. While the presentation of that call on the CBS program was hardly conclusive — couldn't these retired FBI guys get better engineering than that? — it does suggest three voices chatting in the house after Patsy thought the call was disconnected. Burke insists he was still sleeping, or pretending to be asleep, in his room, but it sounds like things were a lot busier before the police arrived than we've been led to believe....

Burke Ramsey, older brother of JonBenét Ramsey, who was murdered in Boulder on Christmas Day of 1996, has filed a lawsuit against Dr. Werner Spitz, a Michigan-based forensic pathologist. Spitz theorized on the CBS program The Case of: JonBenét Ramsey that Burke had killed JonBenét with a blow to the head.

The lawsuit doesn't target Spitz for his comments on the CBS production. Rather, the document focuses on an interview he gave to CBS Detroit on September 19 during which he made similar statements. The case has been filed in the 3rd Circuit Court for the County of Wayne, Michigan, which encompasses the Detroit area; Burke currently lives in Charlevoix County, Michigan.

However, the suit maintains that "the CBS docuseries and Defendant Spitz's participation in it will be the subject of separate defamation litigation to be filed in the near future in Los Angeles, California."

Burke Ramsey, brother of JonBenét Ramsey, who was murdered in Boulder on Christmas Day 1996, has settled a lawsuit filed in December 2016 over the CBS docu-series The Case of: JonBenét Ramsey, which asserted that Burke killed his sister when he was nine and she was six.

The terms and amount of the settlement haven't been made public. But the original suit sought $750 million in damages.

Lin Wood, the Atlanta-based attorney for Burke and his father, John Ramsey, is limited in what he can say about the resolution of the case. But he tweeted: "After handling many defamation cases for them over the past twenty years, hopefully this is my last defamation case for this fine family."

The announcement about the impending auction of the Frederick home once occupied by Christopher Watts, who made national headlines after he killed his pregnant wife and two children there last year, drew comparisons with multiple attempts to sell the Boulder home where six-year-old JonBenét Ramsey was murdered in December 1996.

Today the home remains unavailable for purchase, but not because no one wants to live in a place where such a notorious tragedy happened. Instead, Carol Schuller Milner and her husband, Timothy, who bought the house in 2004 before returning to California a few years later, are residing there again, and enjoying it immensely.

"The house is not vacant," Carol says. "We actually had offers on it — decent offers. But we didn't take any of them, more out of our attachment to the house. It's our home, and we really, really love it."

...The issue's headline screams "Devil Cult Burns JonBenet's Grave!" — and the story it accompanies uses several more exclamation points in a loony but somehow impressive attempt to turn a nothing incident that took place months ago into a shocking revelation.

The subhead inside the tab cites "fears devil worshippers set fires on slain tyke's final resting place," but the folks suffering from this bout of anxiety are never named — and that's hardly the only gap in what we're going to charitably dub Globe's "reporting."

December 26 will mark a quarter-century since the murder of six-year-old JonBenét Ramsey in Boulder. No one has been convicted of the crime, but in the just-released book Unsolved: The JonBenét Ramsey Murder 25 Years Later, Paula Woodward, a former investigative reporter for 9News who's been covering the tragedy since 1996, argues that new DNA technology has the potential to break the case — if only Boulder detectives would use it.

"This child was tortured and murdered, and her death has never been accounted for because it was investigated by people who were not competent to do so," Woodward says. "And now, the decision on whether or not the remaining DNA is tested with new technology that can trace family history is being made by the two investigators who were on the case 25 years ago."
KEEP WESTWORD FREE... Since we started Westword, it has been defined as the free, independent voice of Denver, and we'd like to keep it that way. With local media under siege, it's more important than ever for us to rally support behind funding our local journalism. You can help by participating in our "I Support" program, allowing us to keep offering readers access to our incisive coverage of local news, food and culture with no paywalls.
Make a one-time donation today for as little as $1.